The flash PMIs for June paint a disappointing picture of the underlying health of the US economy at the end of the second quarter.

At 51.2, the seasonally adjusted Markit Flash Composite US Purchasing Managers' Index" (PMI"), covering both manufacturing and services, remained at one of the lowest levels seen over the past six years. Both sectors barely saw any growth in June.

The surveys point to annualised GDP growth of just under 1.0% in the second quarter, similar to the 0.8% pace seen in the first quarter and far below widely-held expectations of a rebound to 2.5%.

The third quarter average PMI reading of 51.5 was unchanged on the first quarter average. This represents the weakest extended period of growth seen in the US since the 2009 financial crisis.

While the PMIs indicate that growth did revive in April, May and June have seen disappointing readings as businesses have reported increased uncertainty. This is linked to weak global demand, the struggling energy sector, the strong dollar and the upcoming presidential elections.

The surveys also point to the economy once again being dependent on the service sector to sustain growth in the second quarter while manufacturing acts as a drag. However, growth has even waned markedly in the service sector in recent months. Business optimism among service providers fell in June to the lowest since such data were first collected in 2009.

Hiring was affected by the rising uncertainty, with employment across both manufacturing and services rising at the slowest rate since December 2014. A historical comparison of survey and official data suggest the latest PMI readings are consistent with non-farm payroll rising by 140,000 in June, with a slight drop in factory headcounts.

With the UK's 23rd June vote to exit the EU adding to global uncertainty and financial market volatility, it seems highly likely that US growth will been impacted in the third quarter, not least via the strong dollar that has resulted from the UK's decision.

Uncertainty caused by 'Brexit' means it's almost certain that the Fed will refrain from hiking interest rates in July, and the weakened PMI data suggest that policymakers will become increasingly worried about the underlying health of the US economy as the official data releases look set to disappoint in coming months. 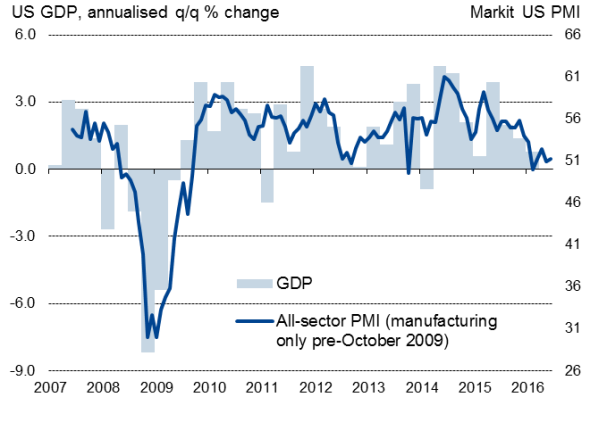 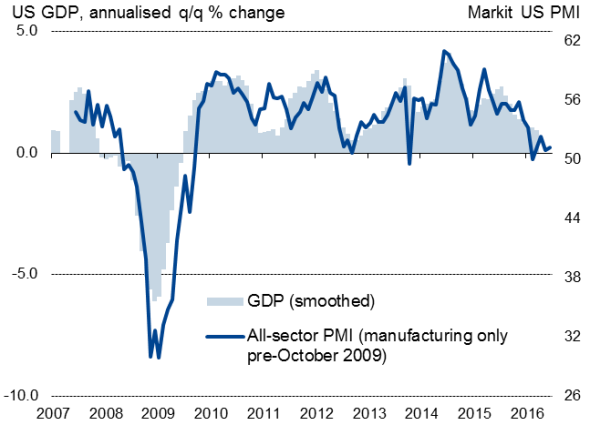