The eurozone economy showed renewed signs of life at the start of the fourth quarter, enjoying its strongest expansion so far this year with the promise of more to come, according to PMI survey data.

The Markit Flash Eurozone PMI rose from 52.6 in September to 53.7 in October, signalling the fastest monthly increase in business activity since December of last year.

October's PMI is consistent with a quarterly GDP growth rate of 0.4%, up from the 0.3% rate signalled for the third quarter, but there are encouraging forward-looking indicators which suggest there are upside risks to this estimate.

In particular, backlogs of work (orders received but not yet completed or started) accumulated at the fastest rate for over five years, meaning business activity growth and hiring look set to accelerate further as we head towards the end of the year.

Other encouraging forward-looking signals were higher inflows of new orders, increased job creation and busier supply chains, as well as signs of some companies moving away from cost-cutting inventory reduction policies towards restocking. The amount of inputs bought by manufacturers for use in production showed the largest rise for over two-and-a-half years.

Policymakers will be encouraged by signs of both stronger economic growth and rising price pressures.

Not only does the survey point to average prices charged for goods and services increasing at the steepest rate for just over five years, but October also saw the extent of manufacturing supply chain delays hit one of the highest in five years. 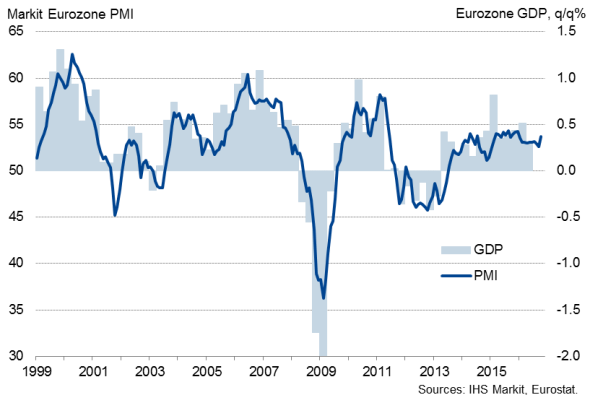 Increasingly widespread delays suggest demand is outstripping supply for many goods, something which is usually soon followed by rising prices and investment in additional capacity.

While much of the rise in prices in October could be traced to higher oil and energy prices during the month, the increased incidence of supply chain delays (and rising backlogs of work) suggest that pricing power is being re-established. If this continues, the shift from a buyers' to a sellers' market should in theory push core inflation higher - a welcome development for which scant signs have been evident in recent years.

The October survey saw an especially encouraging recovery in German growth, with the PMI pointing to a 0.5% pace of expansion and the rate of employment growth climbing to a five-year peak.

Modest growth of 0.2-0.3% is being signalled for France, but there are various indicators which suggest that France will enjoy stronger growth in coming months, including a marked build-up of uncompleted work and a resurgent export growth, both of which rose at the fastest rates for over five years.