Golf investors stuck in the rough

With an ageing customer base and slimming margins, companies with large exposure to the golfing sector have seen their stocks come under pressure in recent weeks. Short sellers have been keen to play this trend, with many companies seeing increased demand to borrow.

Golf has long been touted as a great social experience, and four hours of face to face contact has helped cement business deals for decades. But today's digital age where social interaction is measured by Retweets and Facebook "likes" has driving golfers off the course in their droves, according to the Sports & Fitness Industry Association. Golf participation rate for 18-34 year olds has fallen by 13% in the last five years. Combined with an ageing core golfer population, the outlook for the sector is looking bleak.

The number of golf rounds played in the US fell by 5% last year according to industry monitor Golf Datatech. This has impacted industry sentiment, with German firms Puma and Adidas recently citing weak golf sales as a contributing factor to their recent disappointing earnings releases. Accordingly, we've seen short sellers circle in firms with large golf exposures.

By far the biggest disappointment of the recent spate of results has been German sportswear conglomerate Adidas which recently issued a profits warning, sending its shares down sharply. Contributing to the profits warning was an 18% fall in its Taylor Made division, which the company attributed to the current weak demand for golf equipment and lacklustre product launches. Short interest in Adidas has surged by over a third in the wake of that news, with 4.2% of the conglomerate's shares now out on loan. 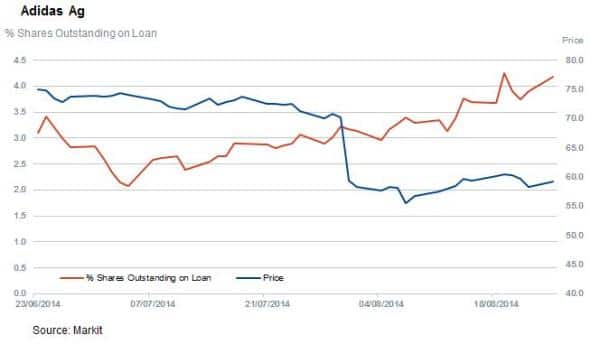 Puma also citied weak golf demand in its last earnings results which sent its shares to a new three year low. Shorts have been very active in this very tightly held name with 16% of the company's freely traded shares out on loan, twice the number seen a year ago.

While both Puma and Adidas have a fair amount of skin in the golf game, no company is as tied to the golfing sector as Callaway, which draws the entirety of its revenue from golf. The weak golf market has seen shorts circle in the firm, with nearly twice as many ELY shares out on loan as seen at the start of the year. This short interest looks to have been well timed as the firm's shares are down by 9.5% year to date. 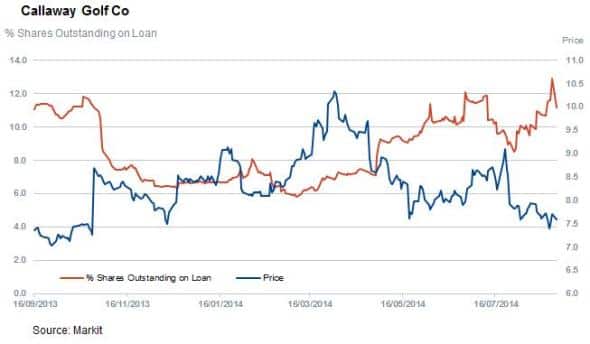 Dick in the clear

One has only to look at Dicks Sporting Goods' recent decision to axe its golf business to highlight negative investor sentiment towards the sector. The firm, which recently announced it was paring back its golf business, suffered a nearly 10% fall in sales. Investors seem to take CEO Joseph Schmidt's comments that: "Golf, from a participation standpoint and how it translates to retail, is in a structural decline," to heart. This in turn has seen Dick's shares trade sharply higher, while short sellers have closed nearly all their positions with demand to borrow shares in DKS falling to a three year low. 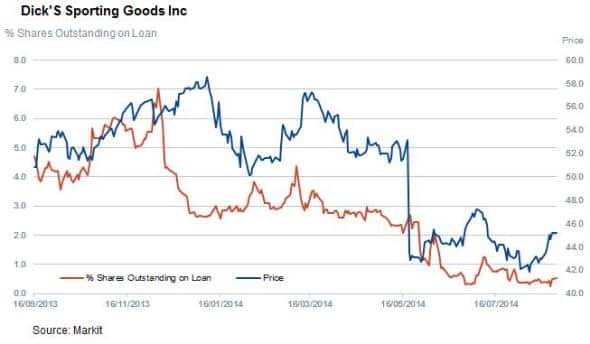