Retailers, which have been the hot short trade of the year, are coming under increased pressure from short sellers heading into earnings

S&P 500 short sellers, already disproportionally active in retailers, are gearing up for more disappointment from the sector this earnings season.

The sector's very evident struggle against online rivals has already caused its shares to trail the wider S&P by 20% year to date. Efforts to head off this competition by aggressively closing down stores and investing heavily in omnichannel distribution has so far left shorts unconvinced; demand to borrow the sector's shares continues to climb ever higher. This relentless buildup of shorting activity means that the average short demand for the sector now stands at 5.2% of shares outstanding, the highest level in over two years.

Constituents of the S&P 500 index have been seeing a slight pickup in average shorting activity since the start of the last earnings season; however, shorting among retailers has far outpaced anything seen in the wider market. This means that S&P retailers are now twice as shorted as the overall index - an increase of 1.5 times since the last earnings announcements in April.

With 23% of its shares out on loan, Signet Jewelers is by far and away the top retail short target among S&P retailers. Signet is reeling from two disappointing sets of quarterly earnings, which have wiped out more than a third of its share price value year to date. Short sellers circled the firm due to its reliance on extending credit to customers to drive sales growth. The company now sits on over $1.8bn of customer driven receivables, and this makes it highly susceptible to a material decline in customer credit. Signet has taken steps to address these worries by selling off some of its receivables book. It is also trying to outsource its credit program, but short sellers remain unconvinced, and the demand to borrow its shares has continued to climb. 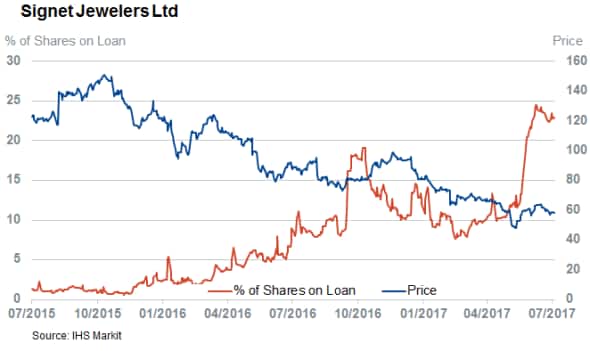 The other two steps on the S&P retail short podium are filled by department store operators Kohl's and Nordstrom, which have 17% of their shares out on loan. After posting worse than expected earnings, both firms have seen a material increase in short interest over the last six months..

While fellow department store operator Macy's fails to feature among the top short targets, the firm has also been coming under increasing short seller scrutiny. Short sellers have doubled their bets since the start of January, and this indicates they may not be content with the 36% slump in Macy's shares year to date. 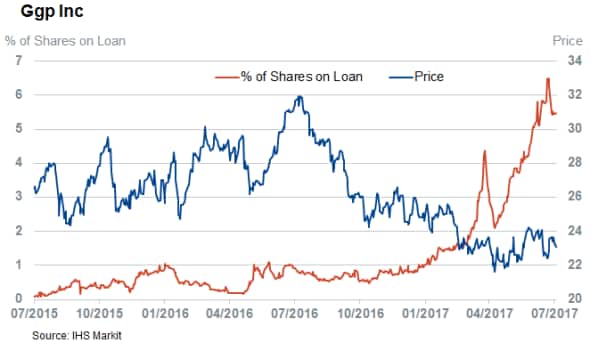 Short sellers are also betting against Retail REITs as more leaseholders hand their keys back to their landlords. This trickledown impact has seen Simon Property Group and GGP experience a fourfold increase in shorting activity since the start of the year.

While both firms are still not at the short interest levels of physical retailers, this recent rise is still notable, as it means that both are now at their highest levels of shorting activity in over 3 years.

The negative sentiment expressed by short sellers is mirrored by ETF investors, who have continued to cash out of retail focused funds over the last four months. These investors were initially willing to give the retail sector the benefit of the doubt, because retail ETFs experienced their first quarterly inflow in two years over the first quarter. 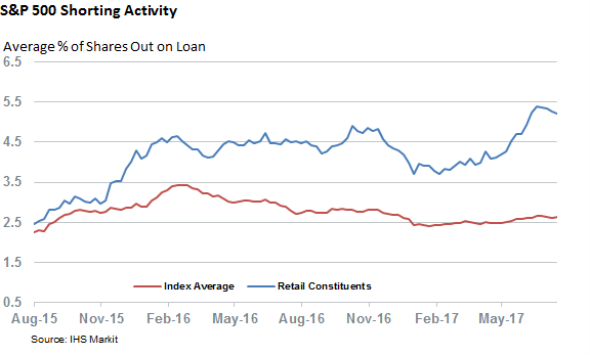 However, this change of heart proved to be short lived as investors have since withdrawn over $100m from the top four US Retail tracking ETFs, according to IHS Markit ETF Analytics.