Investors rush back to emerging markets

Developed market equity investors are clamouring for a piece of the emerging markets (EM) as the asset class surpasses that of developed markets.

Emerging market equities have been the surprise story of the year to date which has seen investors in developed markets clamour for a piece of the action as ETFs that invest in the asset class experienced their largest monthly inflow in over three years. In March investors piled over $9bn of new assets in these funds. This appetite for emerging markets has continued into the second quarter as $2.7bn of new assets has flowed into emerging market ETFs in April so far. 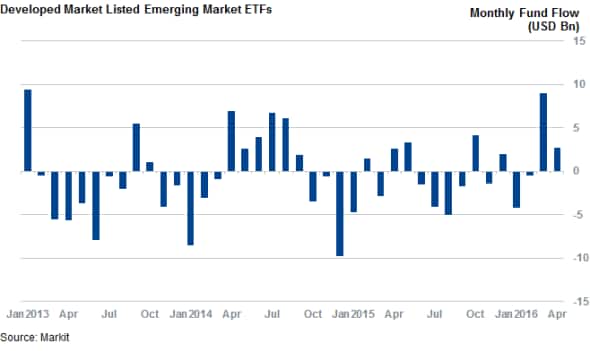 The asset class looked forlorn at the beginning of the year as the market fretted about more interest rate hikes from the US fed, a cooling China and sliding commodity prices. These fears were evidenced by the outflows seen in the opening two months of the year when the same group of funds saw $4.5bn of redemptions as emerging markets slipped to new multi-year lows.

While these factors still linger, a rebound in commodities prices and hopes that the Fed will take a more dovish path in the medium term have seen the largest emerging market ETF regain all the ground lost in the opening weeks of the year.. In fact the largest emerging market ETF, the Vanguard FTSE Emerging Markets ETF has delivered twice the returns seen in large cap US equities as tracked by the S&P 500. 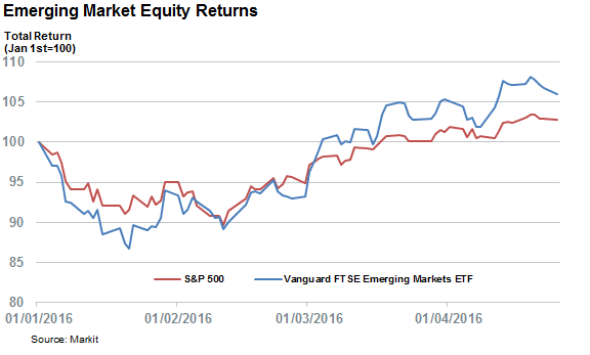 Economic reality is starting to catch up with the recent market rebound as the March release of the Markit Emerging Markets PMI index indicated that output in emerging market economies grew at the strongest pace in ten months. 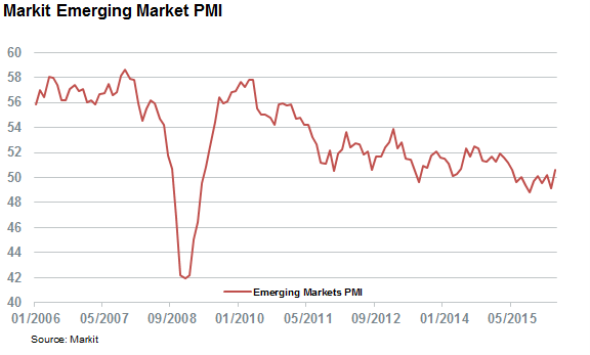 The strong inflows year to date, over $7bn have been largely driven by investors piling into funds which invest across more than one emerging market country such as the previously mentioned Vanguard FTSE Emerging Markets ETF and its peer the iShares MSCI Emerging Markets ETF. With global volatility and political instability still an issue on a country level, it appears that investors have been choosing the broad brush approach when tackling the asset class.

Country focused funds have seen less than $1bn of net inflows which severely under reports the asset flow in the asset class. The absolute fund flows across the 282 emerging market country focused equity funds and has seen over $6bn of gross fund flows in the opening four months of the year.

Brazil has been the most popular country so far this year as investors bought $629m of exposure to the country. Indonesian, Mexican and Malaysian funds have also proved popular among investors seeking single country exposure.

China has been the largest loser out of the trend as developed market investors cashed out over $521m of exposure from the country. If anything, the exodus out of China has been down played given that inflows into listed Hong Honk funds with exposure to mainland China have balanced out large outflows seen by US and European listed funds which track the Chinese market.