The first survey data of business activity in 2016 indicate an inauspicious start to the year for the US economy.

A struggling manufacturing economy is being accompanied by a services sector where growth showed further signs of losing momentum in January even before the bad weather hit.

The seasonally adjusted Markit Flash U.S. Composite PMI Output Index registered 53.7 in January, down slightly from 54.0 in December. Although the index still pointed to a solid increase in private sector output, the rate of expansion was the lowest since December 2014.

Markit US PMIs and economic growth 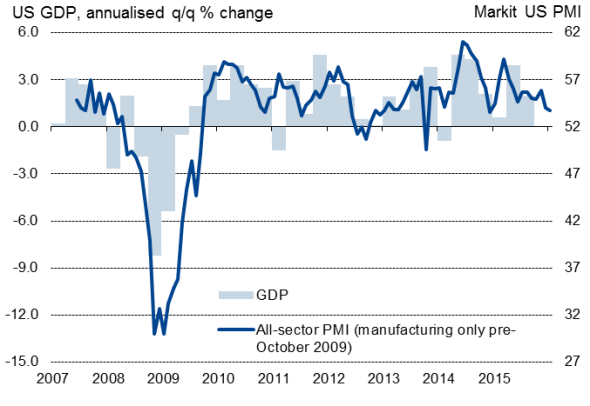 Although a stronger rise in manufacturing output was seen during January as the 'flash' manufacturing output index rose to 54.0, up from 52.5 in December, the rate of growth remained below that seen throughout much of last year as producers continued to face headwinds that include weak overseas demand and the strong dollar. At the same time, the equivalent flash index of business activity in the far-larger services sector slipped to 53.7 in January from 54.3 in December, its lowest since December 2014. 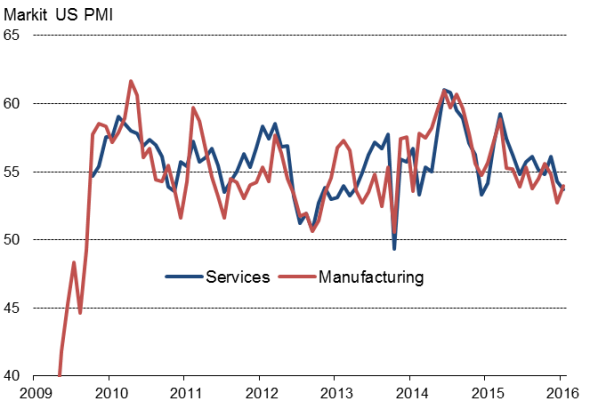 The data are by no means disastrous, signalling a 1.5% annualised rate of economic growth at the start of the year. They survey measures of new order inflows and employment meanwhile improved; off last year's highs but signalling fairly robust expansions. The employment indices from the two surveys are consistent with non-farm payrolls rising by 205k in January.

However, a drop in the survey's gauge of business confidence about the outlook to one of its lowest for five years suggests that firms are bracing themselves for worse to come. Worries about financial market volatility, the impact of slower growth overseas, a downturn in the energy sector and uncertainty about higher interest rates all took their toll and set the scene for further weakness in coming months.