Although gold has lost its luster with investors in the wake of US election, the appeal of precious miner ETFs has continued to grow.

The unanimous risk-on mood in global markets in the wake of the US election has seen investors flee gold and other precious metal ETFs at the fastest rate in over three years, according to Markit ETF analytics.

While gold, which trailed the S&P 500 by over 18% during the worst of the post-election selloff, has regained some of its appeal in the New Year as it clawed back some of the ground lost to equities, the $9.1bn of outflows pulled from precious metal ETFs since November 8th represent a significant 9% of the assets managed on the eve of the election.

As holding physical gold has gone out of fashion since the election, the appetite to invest in precious metal producers has continued undeterred as ETFs that invest in the sector have experienced over $2.2bn of inflows since the first week of November. Perhaps most surprisingly, these inflows have occurred every week since the election save one, despite the fact that the largest of these products, the VanEck Vectors Gold Miners ETF (GDX) was down by over 20% from its pre-election close in the middle of December. 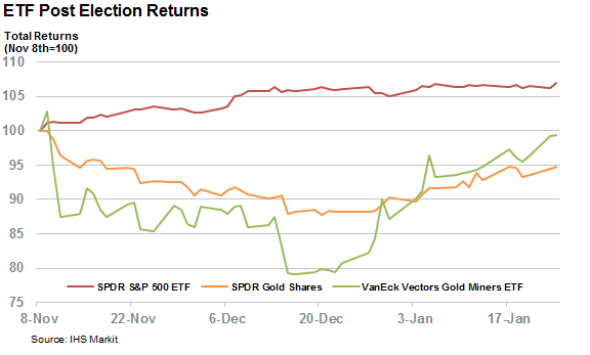 The continuing investor faith in gold miners has been rewarded however as the GDX has since gone on to recoup all the ground lost since the election. Demand for the GDX and its peers indicates that investors are expecting the rally to continue. This may be proven right should physical gold continue to climb as investors regain their appetite for the commodity's inflation/volatility hedge - as mining shares are essentially leveraged plays in the physical commodities they mine.

While ETF investors have unanimously embraced precious metal producers, short sellers have started to become increasingly skeptical of the sector's smaller, more volatile, firms in light of the recent turn of events. In fact, the average short interest among constituents of the VanEck Vectors Junior Gold Miners ETF, which invests in the smaller precious metal miners, now hovers near a two year high. 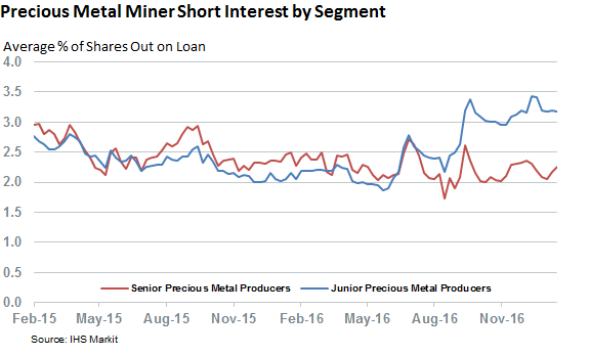 The favorite short targets over recent months include Canadian firm Premier Gold Mines whose short interest now stands just shy of 10% of shares outstanding after a doubling of its demand to borrow and McEwen Mining which has over 17% of its shares out on loan. 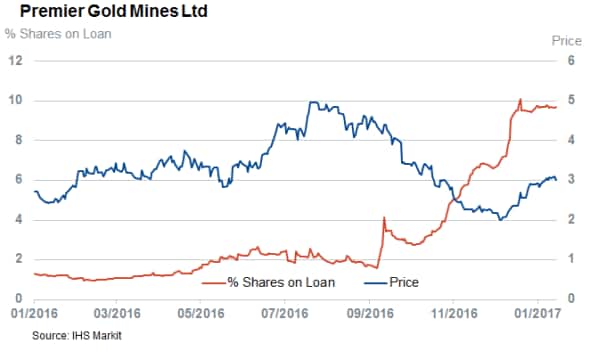 The largest surge in shorting activity in the last three months was seen in Perseus Mining which has seen demand to borrow its shares jump by 270% to 8.3% of shares outstanding.

Bearish sentiment towards precious metal producers has been largely constrained to the smaller end of spectrum however as the constituents of the GDX haven't attracted any material jump in short interest despite the recent volatility.