Will copper continue to shine?

The cost per pound of copper just crossed over $3 for the first time in three years, and its year-to-date rally has advanced the commodity's price by more than 20%.

John Mothersole, director of research for the pricing and purchasing at IHS Markit attributes copper's recent ascendance to a variety of factors.

"The most potent short term forces have been the weakening dollar and speculations about a possible Chinese ban on scrap copper imports which would boost demand for raw copper," says Mothersole.

"Copper's price has also reacted to the rebound in economic growth, helped in part by China's ongoing economic stimulus. The market is also getting increasingly excited about electrification of both industrial and transport applications which use up a significant amount of copper in motor windings."

Investors are eager to grab a piece of this rally - the 33 global copper ETFs amassed more than $100m of inflows since the start of the year. These inflows put copper ETFs on track to post their best year since copper's last bull run in 2012. 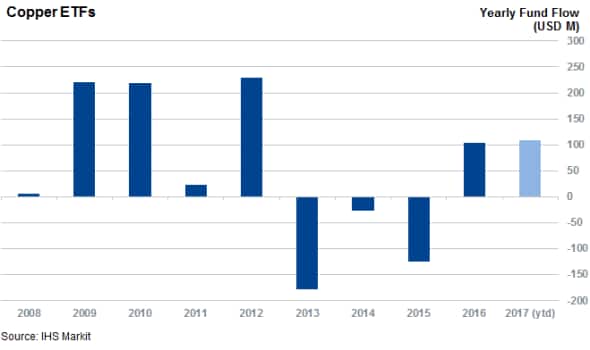 While it would be easy to dismiss this as insignificant - copper ETF inflows represent a minuscule portion of the $380bn in total 2017 ETF inflows - copper ETFs have grown their AUM base by more than three times the pace of other ETFs.

Copper's strong run has led the market to warm up to global copper producers. Global X Copper Miner ETF (COPX), the only fund which invests solely in copper producers, has returned a solid 23% year-to-date on a total return basis. This caps a rebound in copper shares, which drove COPX's share price to more than double from the lows set in Q1 2016.

Strikingly, this performance hasn't been enough to attract large inflows COPX - in fact, COPX has only managed to grow its AUM base by 1% this year. The most likely cause of this is: COPX is small and its annual fee (65bps) is rather expensive for an ETF.

Investors are not betting against this rally, and shorting activity across the constituents of COPX are near multi-year lows. The average short interest in COPX constituents is now more than 70% lower than it was during the peak of last year's volatility, when 5.2% of copper shares were shorted on average. This covering means that copper producers now have half the average short interest of other global stocks. 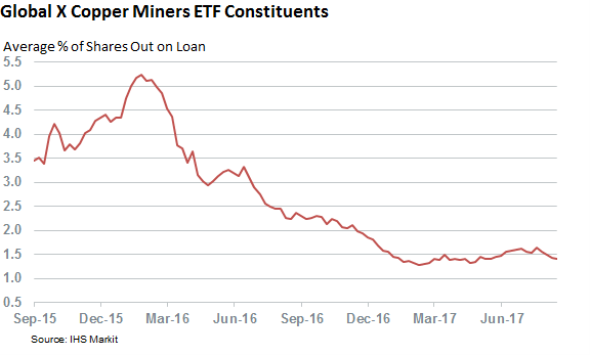 A few copper producers still have residual shoring activity, such UK producer Antofagasta. But covering has been universal across the sector in the last 12 months.

Nearly every constituent of COPX reduced or suspended dividend payments during the crisis. Nonetheless, firms are loosening their purse strings again. IHS Markit Dividend Forecasting expects these firms to pay more than three times higher in FY2017 aggregate dividends compared to the previous year. Glencore, Vedanta and Antofagasta will contribute the vast majority of the uplift in dividends. 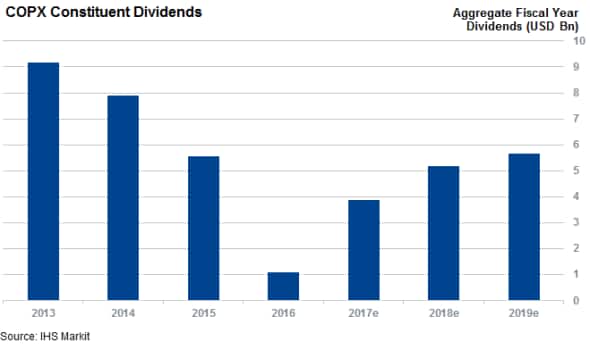 Copper dividends are expected to be further boosted in FY2018 - this will drive the sector's aggregate dividends back over the $5bn mark. 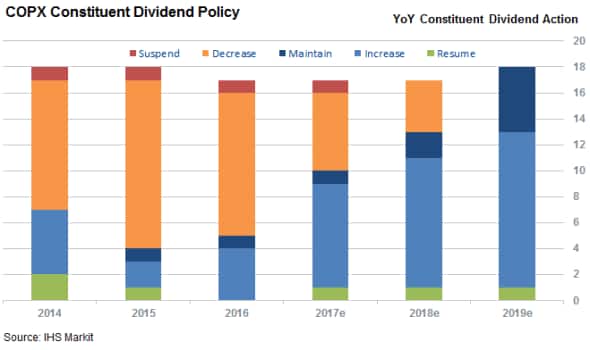 Granted, this is still much lower than the $9.2bn of total dividends paid by these firms back in FY2013, but it does reflect the sector's growing profitability. And it also reflects the growing confidence that volatility is over.

Oil had its best single day on record and the global markets remained relatively calm today, with US and European e… https://t.co/GAKKee5MtN

After rolling out the Next Generation iLEVEL, a major UX enhancement to our portfolio monitoring solution for priva… https://t.co/vsKH11eKaj

Today marks the launch of the first semi-transparent #ETF in the U.S. In collaboration with @CBOE @AmericanCentury… https://t.co/08rFqGgWJZ

As COVID 19 continues to make an impact on the market at large, the new issuance market continued to suffer, pricin… https://t.co/2B1NP8wR6D