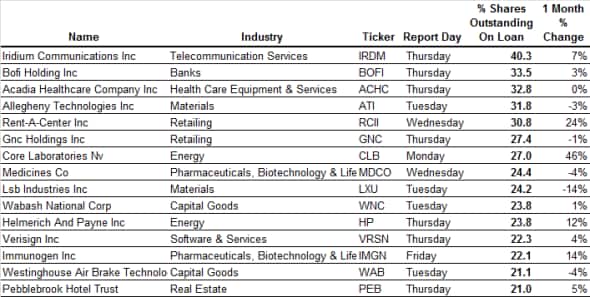 Satellite communication provider Iridium is this week's runaway high conviction short as over 40% of its shares are out on loan to short sellers. The firm is no stranger to short sellers as its shares have been in constant demand over the last three years. While there is no doubt that the persistently high short interest is driven by doubts about the firm's long term prospects as the barriers to satellite communication are rapidly coming down, it is worth noting that Iridium has relied on convertible bonds to fund itself. The latter of the two means that a portion of the borrow demand is likely to be driven by non-directional arbitrageurs which are looking to take advantage of pricing discrepancies between the value of Iridium shares and those of its convertible bonds. Short sellers are also increasingly targeting Rent-A-Center as demand to borrow its shares increased by a quarter in the last month to 30% of shares outstanding. Short sellers were initially scared off by news that Florida based private equity firm Vintage Capital was willing to offer $15 a share for the company. Rent-A-Center's board has since turned down the offer however and short sellers have gone on to target the firm with renewed vigor.

Energy services firm Core Laboratories has seen an even larger rise in short interest in the last month. Short sellers have increased their positions by a massive 46% over this period to 27% of all shares outstanding. The reservoir categorization firm was singled out as a short play by activist investor David Einhorn back in May when he stated that the firm's earnings were bound to disappoint investors in the coming years. Although Einhorn's thesis was initially proven wrong by Core's last earnings update, the firm's skeptics aren't going anywhere as demand to borrow its shares has continued to climb to the current all-time high.

The big short target among firms announcing earnings in Europe this week is Spanish supermarket DIA which is the most shorted constituent of the Stoxx 600 index. Short sellers have steadily built their positions to the current all-time high after the firm failed to meet analyst revenue over each of its last nine earnings updates. The company has still managed to grow its sales, yet this hasn't placated short sellers which have taken positions worth 22% of the retailer's total outstanding shares. 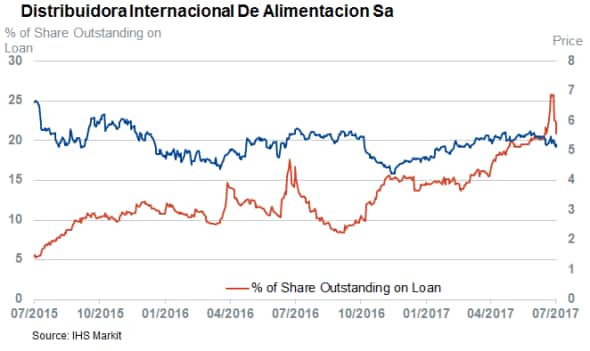 Short sellers continue to target energy firms over this earnings season as five of the sectors' firms feature among this week's list of heavily shorted firms ahead of earnings.

The most shorted of this week's energy lot is UK exploration firm Tullow Oil which has just under a fifth of its shares out on loan as of latest count. Tullow, which went through a rights issue back in April in order to reset its capital base, has seen a resurgence in short interest as demand to borrow its shares has increase by a third from the levels seen immediately after the rights issue completed. This persistently strong demand to borrow Tullow shares indicates that short sellers may be thinking that the company's debt restructuring hasn't done enough to shore up its capital base.

The final short play we'll highlight in Europe this week is chemical firm Clariant which has seen its short interest climb by over 80% in the last month to 12% of shares outstanding. The large increase in Clariant short interest indicates that a growing number of investors are getting behind the firm's proposed all share merger with US competitor Huntsman. This may be a dangerous gambit for short sellers however as several US activist investors have voiced their opposition to the deal on the premise that it significantly undervalues Clariant's shares.

Social media app developer Enish is this week's high conviction Asian short as it has just under 15% of its shares out on loan. In a pattern that has been a feature of this earnings season, we've seen Enish shares jump by over five folds year to date while short sellers have steadily increased their positions to the current all-time high. 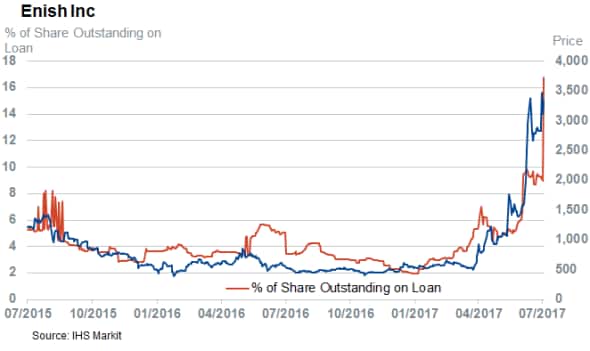 Printer manufacture Seiko Epson has also experienced a large rise in short interest over the last month. This rise is likely to be tied to the firm's imminent ascension to the Nikkei 225 however.

Some private equity firms are responding to increased data complexity with technology – and saving as much as three… https://t.co/xpA76Z12Qa

We are pleased to share that @bancosantander has selected our Global Regulatory Reporting Solution for multi-jurisd… https://t.co/c7htNJ94xI

It's not too late to join our webinar tomorrow on digital transformation in private debt hosted by @AltAssets Priva… https://t.co/eYfA4tZKb9

Listen to our latest podcast interview with Tyson Smith and Leslie Skolnekovich from @TecumCapital where they discu… https://t.co/5F84jOEER4