The US manufacturing sector reported the sharpest improvement in business conditions for over a year in November, boding well for a good performance of the economy in the fourth quarter.

The flash Markit Manufacturing PMI survey results provide one of the first snapshots of economic trends in the immediate aftermath of the presidential election, and found producers reporting the largest monthly gain in production since March 2015.

New export orders rose only modestly due in part to the strong dollar, leaving the domestic market as the main source of demand growth. However, the strength of home demand meant total new order inflows rose at the highest rate since October of last year.

Although only covering around 10% of the economy, the manufacturing PMI acts as a good barometer of GDP. This is in part due to the sector influencing business trends in other related sectors, notably transportation.

Since mid-2007, the correlation between Markit's PMI and official GDP growth has been 82%, rising to 91% if official data are smoothed using a moving average to remove volatility in the GDP series. These correlations are marginally higher than equivalent ISM comparisons of 81% and 87% respectively.

With the average Markit Manufacturing PMI reading for the first two months of the fourth quarter running at 53.6, it is broadly indicative of 0.5% (2% annualised) GDP growth in the closing quarter of 2016.

Markit PMI v ISM as indicators of US GDP

US GDP v Markit Manufacturing PMI (up to November) 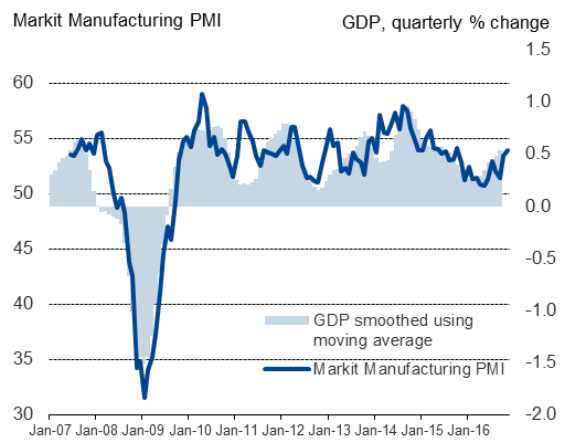 US GDP v ISM Manufacturing PMI (up to October) 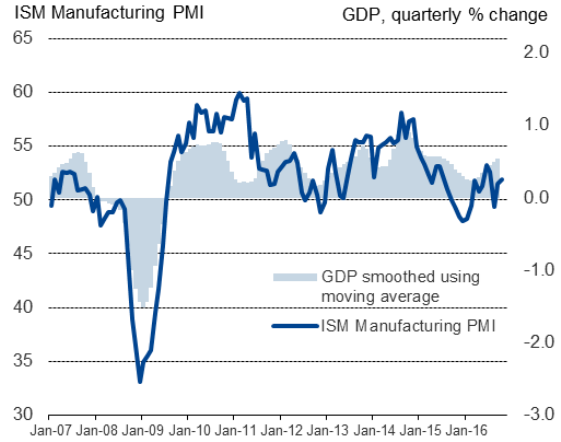