Japan's manufacturing economy contracted for the sixth successive month in August. Although showing signs of stabilising as the rate of decline moderated, the ongoing decline, falling employment and signs of intensifying deflation remain key areas of concern.

The Nikkei Flash Manufacturing PMI, compiled by Markit, rose for a third successive month, up from 49.3 in July to 49.6, its highest since February.

The PMI is a composite index, and digging deeper into the constituent sub-indices provides further encouraging signs.

Factory output rose, albeit only marginally, for the first time since February. The series exhibits an 81% correlation with the official measure of manufacturing output, acting with a lead of one month, so indicates that the underlying trend in production has continued to improve. 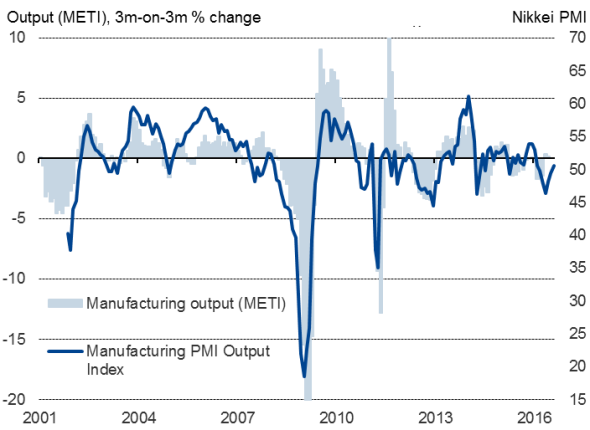 Besides earthquake-related disruptions to production and supply chains earlier in the year, one of the main hindrances on the manufacturing economy has been a drop in exports, linked in turn to weak global demand and the appreciation of the yen. However, while the August PMI survey showed exports continuing to fall for a seventh straight month, the decline was the smallest since February, suggesting the trade drag has eased. 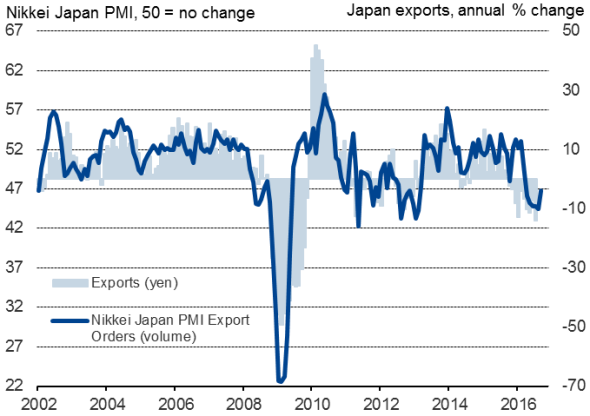 A period of inventory adjustment also appears to be coming to an end. Having fallen considerably in the prior five months, manufacturers' purchases of raw materials showed only a marginal decline in August, resulting in a much-reduced rate of inventory depletion.

It was not all good news, however. Despite the slower rate of decline of exports, order books continued to decline, causing producers to cut their workforce numbers for the first time since September of last year. The drop in employment was the largest seen for over three years, albeit by a small margin. 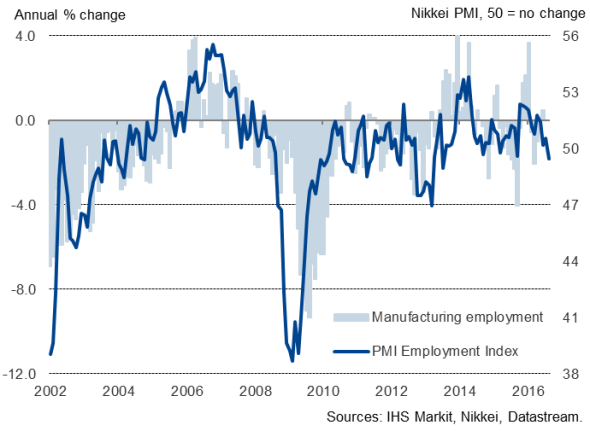 There was also disappointing news on inflation. Average prices charged fell at the fastest rate since October 2012, reflecting a combination of lower input prices and a need to offer discounts to support sales.

The August PMI results follow news of official data showing the economy to have drifted into stagnation in the second quarter. A new monetary and fiscal stimulus package announced at the start of August should help lift growth higher. However, the ongoing contraction of manufacturing and lack of inflationary pressures signalled by the latest survey suggest that expectations will build that more needs to be done to generate a robust economic upturn and beat deflation. 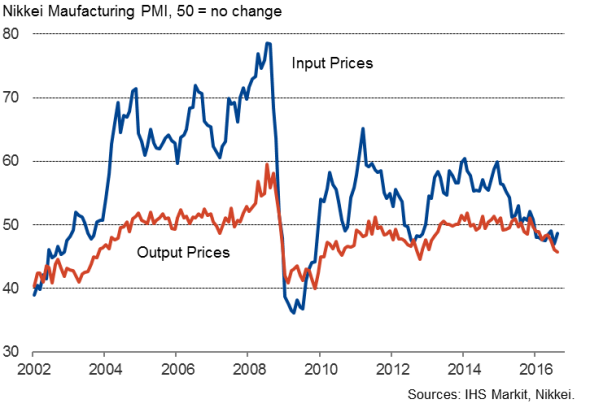