A short trade to sleep on

An explosion in online bed firms in the US such as Casper has seen short sellers target 'traditional' bed retailers over the past six months, all of which see record high short interest.

From Casper to Yogabed, the rise of "bed-in-a-box" companies is starting to haunt traditional mattress retailers and manufacturers in the US, which have attracted record levels of short interest.

Capitalising on consumer purchasing angst, traditional bed makers had been able to maximise margins in mattresses as consumer spend in the segment grew. This growth had driven proliferation and subsequent consolidation of retail store footprint across the US.

However these comfortable margins have also spurred the rise of online direct-to-consumer mattress brands. The traditional retailers are now attracting short sellers and economists who are questioning whether a 'mattress bubble' perhaps exists.

Mattress Firm, the largest US mattress retailer with 3500 physical stores has posted some impressive revenue growth figures with five year compound annual growth of close to 40%. The firm recently posted first quarter revenue growth of 49% in 2016 and has guided for 51% for the full year.

However Mattress Firm's growth has come on the back of a highly aggressive (and perhaps costly) acquisition strategy. Adding over a 1000 stores to its portfolio in the last year alone through the takeover of Sleepy's, underlying organic sales in the business declined in the first quarter of 2016 with the company posting a loss for the period. This has seen short sellers target Mattress Firm with short interest surging by more than a third in the past three months. The cost to borrow shares has increased ten-fold over the past year as short sellers' convictions increase. 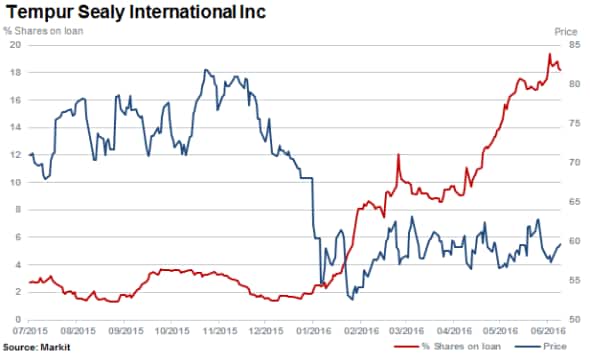 The largest listed bed maker, Tempur Sealy, has seen a significant increase in short interest across the past six months. Breaching 18%, shares outstanding on loan are currently at the highest level seen since late 2008.

Shares in Tempur Sealy fell by more than a fifth in late 2015, while according to consensus forecasts the firm's impressive sales growth posted over the last several years looks set to moderate. 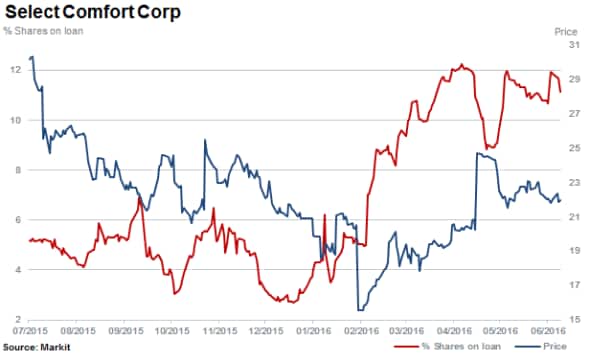 Smaller in market size than Tempur Sealy and Mattress Firm, but seeing the same trends in shorting activity, Select Comfort currently has 11.1% of shares outstanding on loan, rising six fold in the past six months.

Shorts have held onto positions in the stock despite shares staging an 18% rally in the past three months.

Short sellers are clearly targeting traditional bed makers as revenue growth slows amid an explosion in copycat bed-in-box online firms. These companies have the potential to both capture market share and compact margins.

Meanwhile Casper has announced plans to launch in Europe, where others seem to have already found some success.