PMI data point to Japan's all-important manufacturing economy suffering its steepest downturn since late 2012. The Nikkei Flash Japan Manufacturing PMI fell from 48.2 in April to 47.6 in May, its lowest since December 2012.

The PMI now been below the 50.0 no change level for three successive months, and the second quarter average is the lowest since the fourth quarter of 2012.

The headline manufacturing PMI is a composite indicator derived from survey questions on output, new orders, employment, inventories and suppliers' delivery times. As such, the PMI gives a broad indication of the health of the manufacturing economy each month.

However, the survey's sub-indices tell a more detailed story, in which exports are slumping at the fastest rate since early-2013 as yen strength hits competitiveness. The strong currency is also keeping inflationary pressures down, with input costs continuing to fall at one of the steepest rates seen since the height of the global financial crisis. Further falls in survey indices of new orders, backlogs of work and purchases of inputs all point to the downturn persisting, and possibly accelerating further, in June.

The survey data therefore raise worries that the surprise upturn in Japan's economy in the first quarter, when GDP rose 0.4%, may prove frustratingly short-lived. Not only does manufacturing look likely to act as a significant drag on the economy in the second quarter, April's Nikkei services PMI data also point to the tertiary sector slipping back into decline. 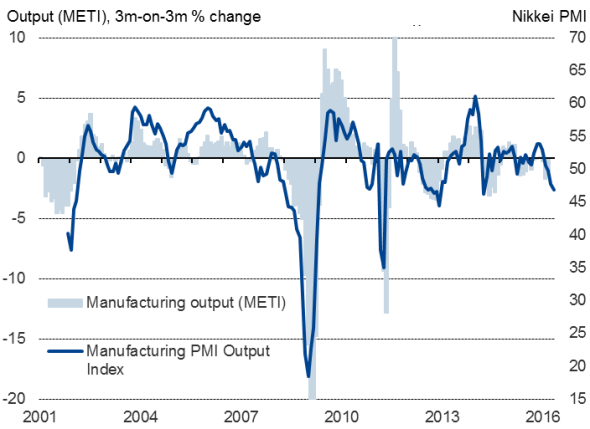 The Output Index (shown above, tracked against comparable official data) fell to its lowest since April 2014. The latest reading adds to signs that manufacturing will have acted as a substantial drag on the economy in the second quarter, with production falling by approximately 2%. 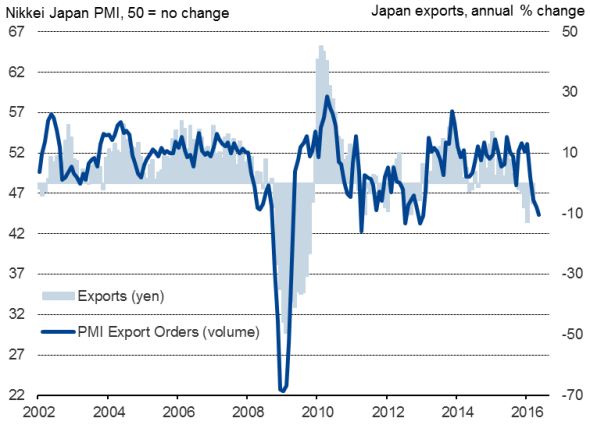 A major cause of the drop in production was a further decline in manufacturing exports. The PMI, which tracks volumes of new orders for goods to be exported, showed the rate of decline of overseas sales accelerating for a third successive month, resulting in the steepest monthly decline since January 2013. The survey found weak overseas demand to have once again been exacerbated by the recent appreciation of the yen, up by over 10% against the US dollar so far this year. 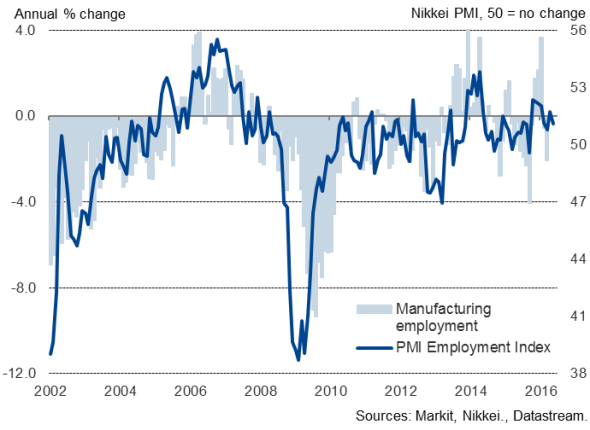 Factory headcounts showed one of the smallest increases seen over the past eight months, the index dipping to a level which is historically consistent with a marginal decline in the official measure of manufacturing employment. A reluctance to hire was largely driven by worries about order book pipelines. Backlogs of work (orders taken but not yet completed) fell at the fastest rate since January 2013. 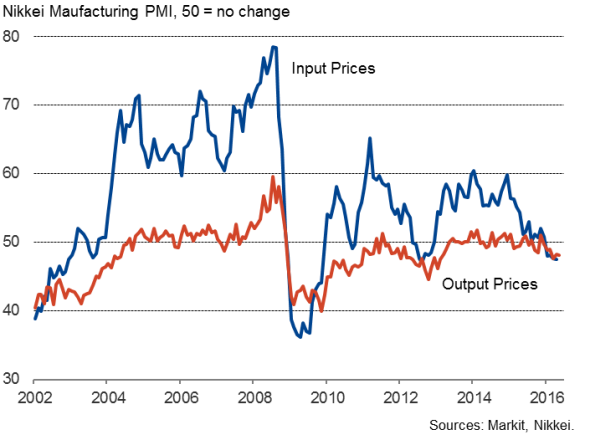 Manufacturers' average input prices continued to fall at one of the sharpest rates seen since the global financial crisis, in part due to the strong yen driving down the cost of imported inputs, notably energy.

Lower costs fed through to yet another decline in average prices charged by manufacturers for their goods. The latest fall was the eighth in the past nine months, and the second-quickest seen for over three years. 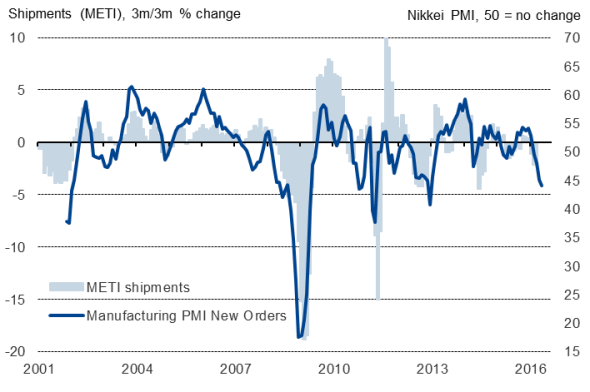 In a sign that output is likely to continue to fall in June, total new orders - including domestic and export orders - fell at the fastest rate since December 2012, down for a fourth consecutive month. A decline in the amount of goods that manufacturers bought for use in production, which showed the largest monthly fall since the sales tax hike of April 2014, added to the sense that firms are expecting weak demand to persist.