The flood of central bank liquidity has seen spreads between euro and dollar denominated debt surge to new highs; a trend seized upon by European ETF investors.

The EUR 60bn flowing every month into the European monetary system has served its purpose as both government and corporate interest rates have hit all-time lows.

On the other side of the Atlantic, the continuing economic recovery has seen the US Fed announce it may raise interest rates at any time. Investors have been eagerly looking to get ahead of possible rate rises. Yields on the 10 year US sovereign bonds have seen risen above the 2% mark, the highest level since the end of January.

Government interest rates have felt the brunt of the recent trend as evidenced by the fact that German 10 year government bonds now offer 175bps more yield than US treasuries of the same maturity. 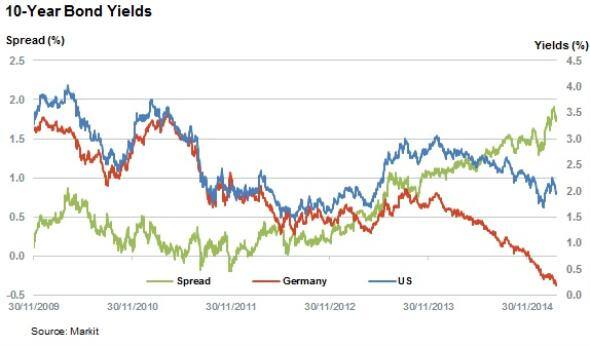 The spread differential was roughly flat at the start of 2012. The end of QE in the US has seen the nation's 10 year bonds trade over the 2% mark over the last three years while continued weakness in the Europe, and the loser monetary policy aimed to spur on growth has prompted a collapse in German 10 year yields.

Corporate rates have also exhibited the same trend. The iBoxx $ Overall index now offers the highest yield premium over the iBoxx &#8364; Overall index in over 15 years at 108bps. This spread is over four times higher than the 15 year average of 40bps. 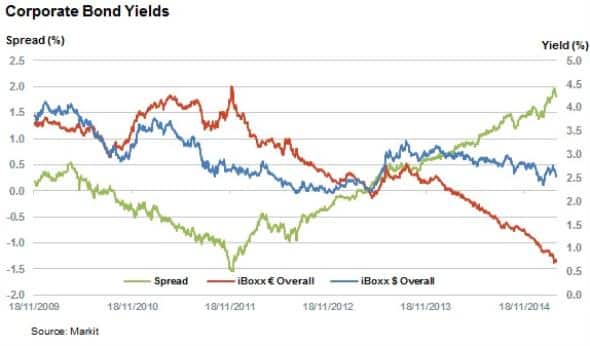 Investors head to US bonds

The growing appeal of yields offered by US debt over European issuances has not escaped European ETF investors. The 69 European listed ETFs which offer exposure to the US debt market have recorded over $2.5bn of inflows this year. This represents a record quarterly amount and has helped to raise AUM to its highest ever level of $16.4bn. 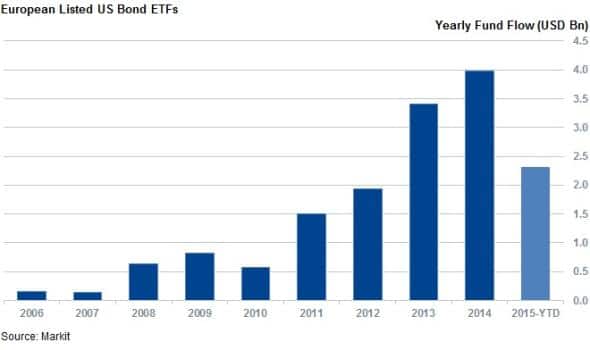 Investors have historically been indifferent to gaining corporate and government exposure through ETFs as the two bonds categories now account for $7bn of AUM. This appears to be changing, however as US corporate bond products have largely outperformed their government bond peers this year, having attracted over three quarters of the inflows.

So far this year, two iShares corporate bond products, the iShares $ Corporate Bond UCITS ETF and iShares $ High Yield Corporate Bond ETF have proved the most popular with investors with both funds having seen over $500m of inflows.