Stock markets around the world are ending 2016 on a high; however the year will be remembered for the many market swings which saw many of the worst performers rebound from the brink. One such example is commodities trading house Glencore, which saw its shares lose 20% in the opening two weeks of the year before they went on to triple in price; recouping nearly all the ground lost during the commodities slump.

These violent reversals of fortunes made for a challenging year for short sellers as simply blindly following the pack was no guarantee of returns. But despite the tough operating conditions, we still witnessed 99 stocks globally which returned at least 50% for short sellers after these shares experienced saw a fresh 52 week high annual high in shorting activity. 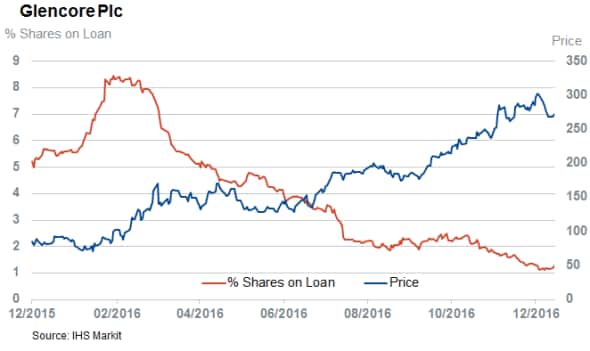 The most profitable North American short positions shifted from the oil patch, which provided the majority of 2015's best performing contrarian positions, to healthcare stocks. Overall, the pharmaceutical and healthcare equipment sector was responsible for a phenomenal 36 of the 58 highly successful short plays across North America in 2016.

The majority of these positions were in relatively small speculative names as the average market cap across these firms was less than $1bn at the time of being heavily shorted; however short sellers also have had some success catching some of Valeant's collapse. Shorts were relatively late in committing to the Valeant trade as despite Valeant's borrow demand only crossing the 3% of shares outstanding threshold in late March, short sellers still managed to catch more than half of the company's year to date collapse. 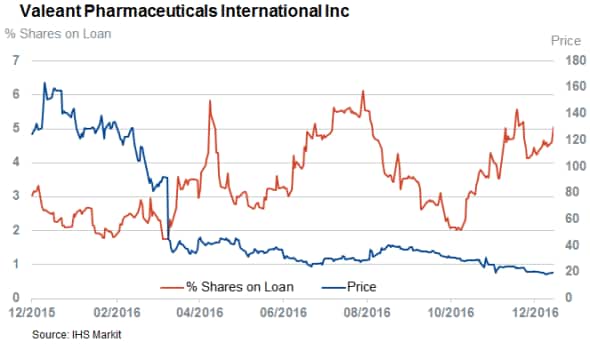 Overall the best performing healthcare short of the last year was another Canadian pharma name, Concordia International, whose shares have slipped by 91% since short sellers piled into the company back in April.

While healthcare was the most fertile ground for short sellers, the sector failed to produce the top performing overall position which goes to airline Republic Airways after filing for bankruptcy protection back in April. The company's shares have lost over 97% since experiencing a fresh 52 weeks high in shorting activity in the opening week of the year. 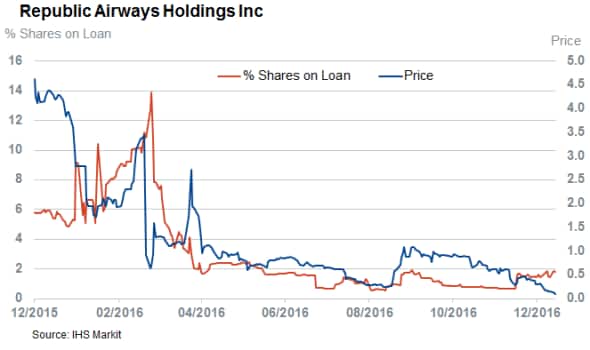 While healthcare stocks proved to the most profitable for North American short sellers, banks - specifically periphery institutions - were the best bets for shorts in Europe. Overall four periphery banks find themselves among the 12 European short plays whose shares have gone on to lose more than half their value since being targeted. 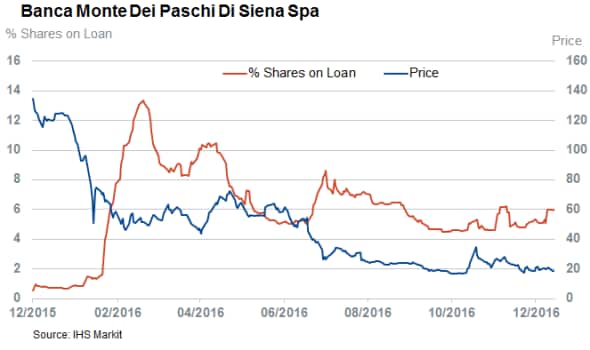 The UK provided plenty of successful short targets including the top performing European short play of the year, Avanti Communications. Avanti's shares are now trading 88% than in early January when it saw its first of many new highs in shorting activity.

Asia also saw its fair share of profitable bear raids as 22 stocks have gone on to lose more than half their value since setting a fresh annual high in shorting activity.

These successful shorts plays are led by Australian recruitment firm 1-Page which has lost over 90% of its value since coming into short sellers' crosshairs back in January. Bankrupt shipping firm Hanjin also proved lucrative for short sellers as they started to target the firm back in January and went on to record an 89% profit as the firm's troubles worsened.

While many of the successful Asian short trades of last year fell in the month after coming under scrutiny of short sellers, none more so than Hong Kong traded Universal Healthcare which lost 58% in the month since setting a fresh high in shorting activity.