Markit's security lending data indicates that the 'best' toy maker of 2014, Hasbro, is also the most sold short in the market.

Short interest levels in toy makers and other entertainment providers highlight investor sentiment amid what is traditionally the biggest sales period of the year.

The largest publicly listed toy counters are Hasbro and Mattel, which have had very different years in terms of share price performance and sales growth. Both companies have seen analysts cut forecasts for sales and earnings as the reorientation of the industry continues as demographics and technology changes impact purchasing patterns.

In the digital age of apps and iPhones, traditional toys and books face strong competition for sales. More choice for parents has meant more competition for toy makers as games, movies and apps vie for childrens' attention.

Toy makers are attempting to implement strategies to bolster their product offering; increasing their appeal to young children who have, or have access to tablets and smartphones. A newly introduced example from Hasbro introduced a video camera-enabled Nerf foam gun that children aged eight can use, film action shots and share and upload.

Some technology 'mash-ups' look more like the traditional media and toy maker relationships of the past as Hasbro partnered with Angry Bird game developer Rovio. 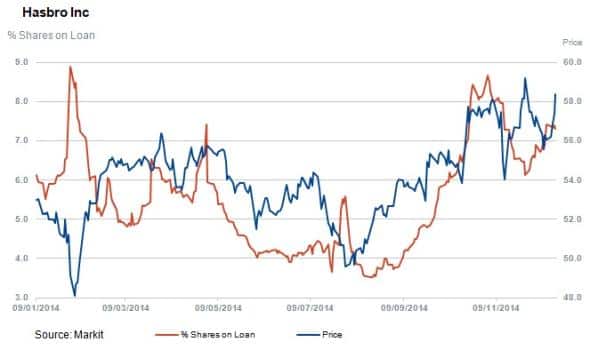 Hasbro's stock is up 12.6% compared to Mattel's 31.7% decline. In September Hasbro won the license (from Mattel) to produce the much coveted Frozen line of dolls and princess brands for Walt Disney. Production is set to start in 2016. Hasbro's share price rallied post the licence announcement despite consensus forecasts for sales and revenue being revised lower.

Short sellers have followed the rally however, with shares outstanding on loan increasing from 4.8% to 7.3%; a 52% increase.

Compared to Hasbro, sales growth at Mattel has stagnated since 2011 at the Barbie maker. Consensus forecasts have been revised down with full year earnings expected to come in 24% lower for the 2014 trading period. 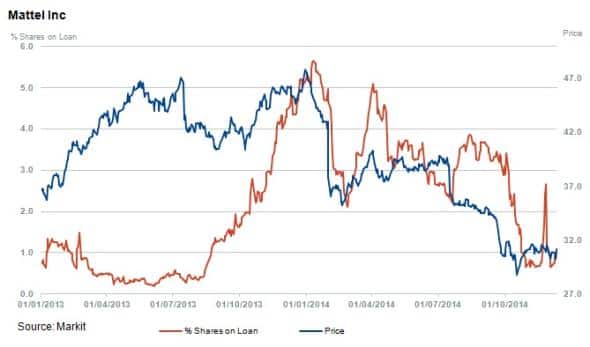 Short sellers of Mattel have covered positions over the course of the year as the stock declined from all-time highs reached in January 2014. Current shares outstanding have decreased to 1.1%.

Mobile game developer King Digital, most famous for the Candy crush app, recently went public. The company has not faired well as the share price is down 12.7% since the March IPO, attracting increasing amounts of short interest during the year, shares outstanding on loan peaked at 2.5% in September. 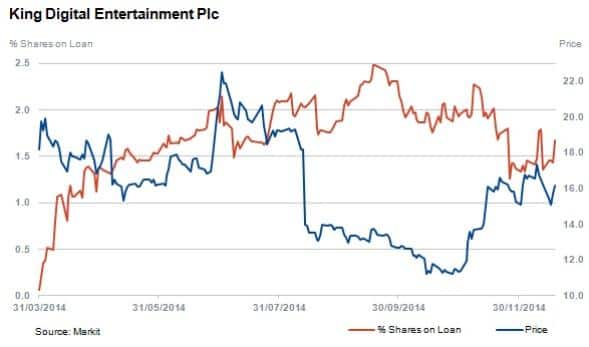 Most famous for Farmville, game and app developer Zynga, has not had the best of times since filing its IPO. The stock is down 40% since March of this year and 74% down since listing in December 2011.