British households have become significantly more pessimistic about how the country's long-term economic prospects have changed as a result of the June vote to leave the EU, but some have become less downbeat about the shorter-term impact.

The findings are based on a representative cross-section of the British population that participate in the regular monthly Markit Household Finance Index" (HFI"), which is compiled by Markit using data collected by Ipsos MORI.

The proportion of people expected the economy to fare better over the next six months as a result of the referendum result has edged higher from 11.8% in August to 12.4% in November, while the proportion seeing economic prospects to have worsened has dipped from 54.4% to 53.1%. The difference, a net balance of -40.7%, is slightly improved on the negative net balances seen back in both the July and August surveys, though the number of pessimists clearly still outnumber optimists to a significant extent.

Pessimism has meanwhile intensified when people are asked to consider the longer-term outlook. While 31.0% of survey respondents saw the Brexit vote to have led to an improvement in the UK's economic prospects over the next 10 years, some 49.3% considered the outlook over the next decade to have worsened due to the vote. 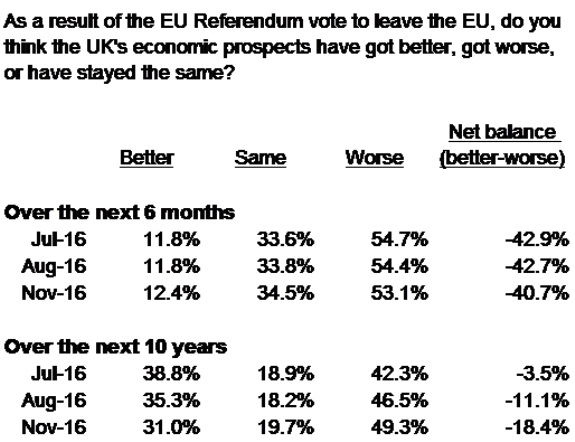 By region, the greatest pessimism regarding the longer-term impact of Brexit was seen in Scotland, followed by the South East and then London. Only the East of England saw the number of optimists outnumber pessimists to any material extent.

All 11 regions saw people pessimistic on balance about the short-term (six-month) impact. Scotland saw the greatest pessimism followed by London, while the East Midlands and East of England were the least negative. 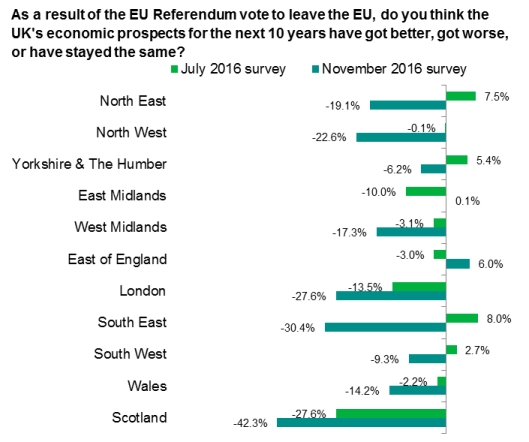 The youngest remained the most negative about the economic impact of Brexit, both in the long- and short-terms. However, even the older generation has become markedly less positive about the longer-run impact since July. 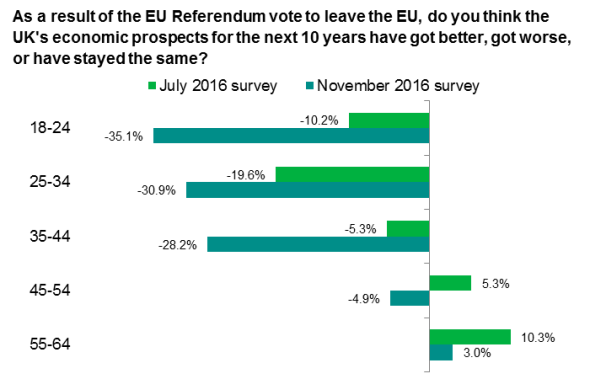 Only manufacturing has seen optimism improve

By sector, only those working in manufacturing, construction and utilities are positive on balance about the long-term impact of Brexit, and even in these industries the number of optimisms only narrowly exceeded pessimists. 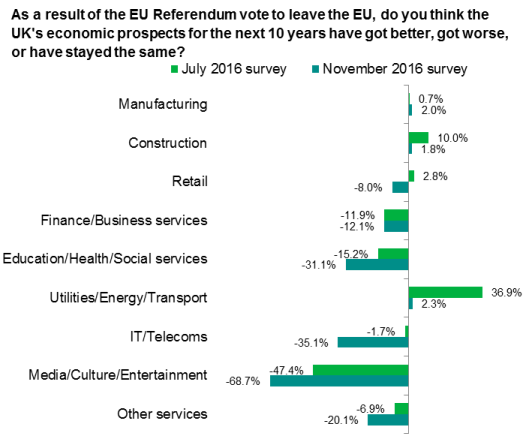 The greatest degree of pessimism was seen in media, culture and entertainment, followed by IT & Telecoms and education, health & social services.

Compared to July, every sector except manufacturing has grown more downbeat about the long-run prospects of the economy resulting from the EU referendum.

Pessimism grows among all income groups 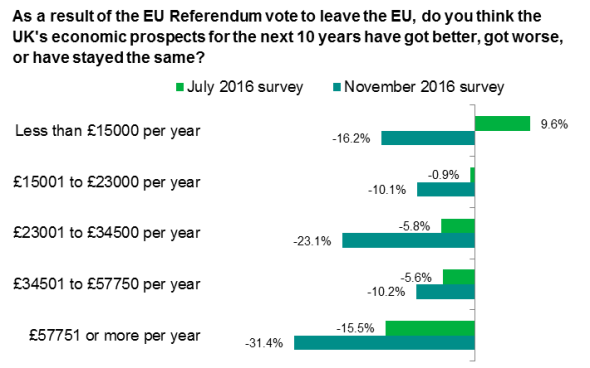 "To many voters, the EU referendum was about other issues than the economy, but the latest survey highlights how Brexit is expected to carry a higher than previously-thought cost in economic terms.

"On average, people have become considerably more pessimistic about the impact of the decision to leave the EU on the economy over the next decade.

"Only those working in manufacturing have become more upbeat about the economy's prospects, presumably seeing some benefit of the weaker pound in relation to boosting export performance. However, even here the number of people seeing Brexit to have boosted the economy's prospects over the next ten years only narrowly exceeds those expecting to see a negative impact.

"Views on the economy's post-Brexit prospects are directly correlated with age, though only the over-55's see Brexit as having a net positive effect, and even these older survey respondents have become noticeably less positive than back in July.

"Similarly, back in July, the only income bracket to perceive Brexit as having a positive effect on the economy's long-term prospects was the lowest earners (under "15,000 per annum). However, by November the positive mood had turned sour for even this segment of the population."