The UK economy opened the third quarter on a weak footing. Output and new orders both fell for the first time since the end of 2012, while service providers' optimism about the coming 12 months slumped to a seven-and-a-half year low. 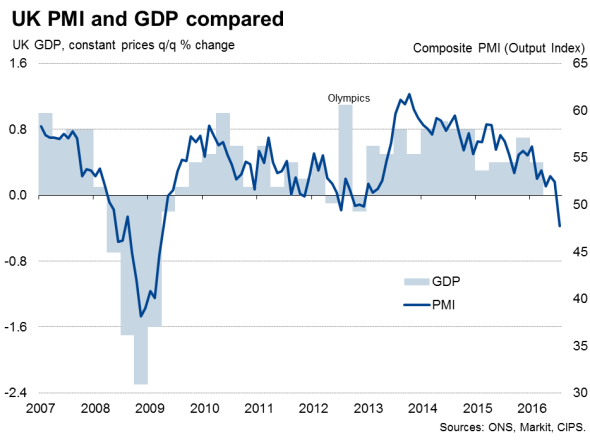 The headline Markit Flash UK Composite Output Index - which is compiled using the same methodology as Flash PMI data published for the euro area, the United States and Japan - fell to 47.7 in July, its lowest reading since April 2009. Data were collected between July 12-21.

The weaker performance of the UK economy during July was especially striking when looking at the month-on-month movements in the index levels. The Composite Output and the Composite New Orders indices fell by 4.7 and 6.8 points respectively since June, the steepest drops registered in the series histories. The 10.4 point decline in the Services Business Expectations Index was also the largest on record.

Output and new orders fell in both the manufacturing and service sectors during July. A number of firms linked this to ongoing uncertainty pre- and post-EU referendum, with reports especially prevalent among service providers.

The downturn in services was also more marked than that seen in manufacturing. Services activity and new orders both fell at the quickest rates in over seven years, with series-record month-on-month drops in the respective index levels.

Manufacturing output and new orders both fell for the first times since the opening quarter of 2013. However, new export business rose for the second straight month and to the greatest extent for almost two years. This was mainly linked to the sharp drop in the sterling exchange rate.

The downside of the exchange rate was a steep rise in manufacturers' input prices, mainly due to higher import costs. The rate of purchase price inflation hit a five-year record, with the extent of the acceleration among the steepest in the survey history.

A similar uptick in service sector costs was not evident. The effects of rising fuel and other input prices at service providers were partially offset by subdued wage inflation, as employment in the sector fell slightly for the first time since December 2012. Manufacturers also reported job cuts, the seventh reduction in as many months.

Cost caution at manufacturers was not only reflected in hiring decisions, but also in the steepest reduction in purchasing activity since March 2013 and a further depletion of stock holdings. Meanwhile, weaker demand and depletion of backlogs of work in both sectors suggest further job losses may occur in coming months. The rate of decrease in overall outstanding business was a four-year record.

UK output prices rose during July, although the pace of increase was only mild and weaker than in the prior month. Service sector charges increased at the slowest rate since February. Factory gate price inflation reached a 23-month high as companies passed on part of the surge in purchasing costs.

Chris Williamson, Chief Economist at Markit, which compiles the survey:

"July saw a dramatic deterioration in the economy, with business activity slumping at the fastest rate since the height of the global financial crisis in early-2009.

"The downturn, whether manifesting itself in order book cancellations, a lack of new orders or the postponement or halting of projects, was most commonly attributed in one way or another to 'Brexit'.

"The one ray of light was an improvement in manufacturing export growth to the best for two years as the weak pound helped drive overseas sales, though producers also suffered the flip-side of a weak currency as import prices spiked higher.

"At this level, the survey is signalling a 0.4% contraction of the economy in the third quarter, though much of course depends on whether we see a further deterioration in August or if July represents a shock-induced nadir. Given the record slump in service sector business expectations, the suggestion is that there is further pain to come in the short-term at least.

"With policymakers waiting to see hard data on the state of the economy before considering more stimulus, the slump in the PMI will provide a powerful argument for swift action."

"The UK economy has suffered sharp falls in output and new orders following the EU referendum as uncertainty has taken hold. The overall pace of decline was the strongest since early-2009.

"Weaker sterling has driven a steep rise in input prices for manufacturers but there is a glimmer of positivity with the new exchange rate encouraging a rise in export orders. However, with a subdued global economy, it is not yet clear whether these opportunities will materialise in the long term.

"Supply chain managers must use this uncertainty to demonstrate what they do best - being agile, adaptive, sourcing the best goods and prices to steer their organisations successfully in the months and years ahead.

"The true extent of the impact of this uncertainty still remains to be seen next month. But with optimism in the UK's service sector at a seven-and-a-half year low, policymakers must take swift action to stop further decline amid political upheaval." 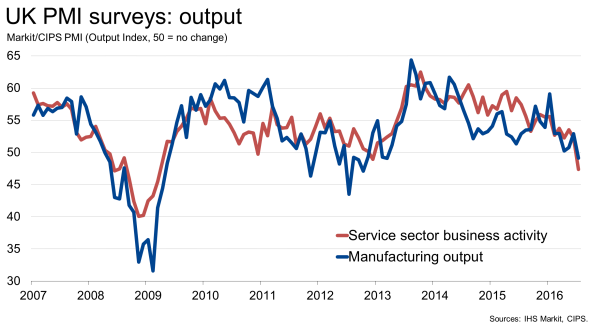