US factories reported their worst month for just over six-and-a-half years in April, dashing hopes that first quarter weakness will prove temporary.

At 50.8 in April, down from 51.5 in March, the Markit 'flash' US Manufacturing PMI" signalled the weakest upturn in overall business conditions since September 2009.

Survey measures of output and order book backlogs are down to their lowest since the height of the global financial crisis, prompting employers to cut back on their hiring.

The survey data are broadly consistent with manufacturing output falling at an annualized rate of over 2% at the start of the second quarter, and factory employment dropping at a rate of 10,000 jobs per month (the survey's output and employment indices exhibit a 90% and 95% correlation respectively against comparable official data, as shown in the charts). 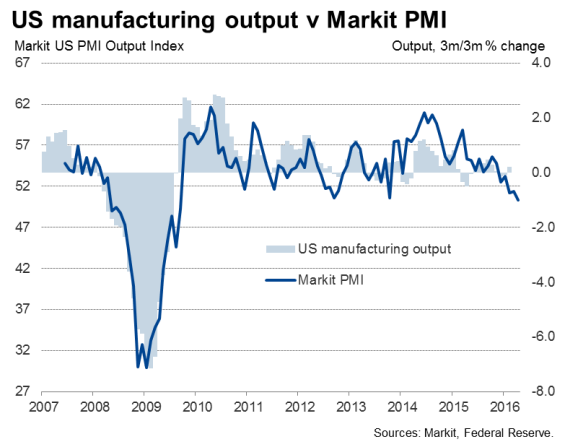 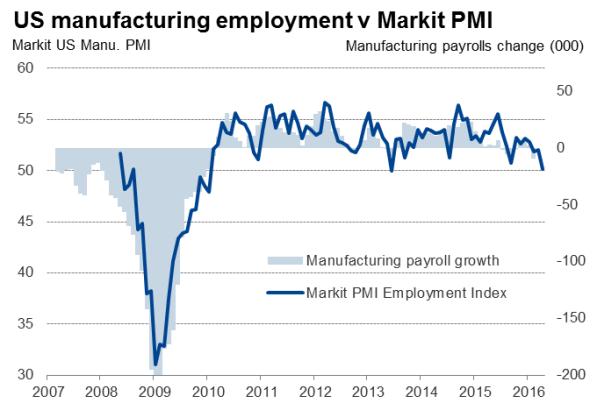 With prior months' survey data pointing to annualized GDP growth of just 0.7% in the first quarter, the deteriorating performance of manufacturing suggests that growth could weaken closer towards stagnation in the second quarter.

The survey responses reveal an increase in business uncertainty in relation to both the economic and political outlook during the month, which is weighing on spending and investment decisions and exacerbating already-weak demand both at home and abroad. April saw the sharpest drop in new export orders since November 2014. Manufacturers also cited ongoing weakness within the energy sector as a further cause of concern.

Manufacturers indicated that tighter inventory management strategies persisted in April, led by the sharpest drop in stocks of purchases since the start of 2014. At the same time, post-production inventories decreased at a moderate pace and manufacturers recorded a renewed fall in purchasing activity.

Factory gate prices meanwhile fell for a third month running in April, albeit at only a marginal pace as some upturn in costs was reported, which was often passed on to customers. The overall picture from the survey is, however, one of a lack of only a very modest uptick in inflationary pressures in the manufacturing sector.