ADT and the smart home debate

Despite arguably having one of most established smart home propositions in the market, recently spun off ADT sees significant negative investor sentiment as tech heavyweights circle in on the "internet of things".

One of the standout product categories featured at this year's Consumer Electronics Show (CES) in Las Vegas was smart/connected home products which promise consumers the ability to remotely monitor and control their home through web enabled tools. While this concept is nothing new, recent innovations in web connectivity have taken the category from a once fringe offering into one of the potential cornerstones in the "internet of things".

The emergence of the product category has not gone unnoticed by the growth hungry tech giants which look to establish themselves in the space, much in the same fashion as they did in mobile space.

Chief among the titans looking to enter the space are Google, whose Nest product lets users control and monitor their home's thermostat and smoke alarm and Samsung, which launched its Smart Home platform at CES with initial functionality similar to Nest. While both firms currently have a fairly narrow product offering, their willingness to open their platform has seen third parties embrace these new architectures with gusto as evident by the plethora of Nest-compatible products on show.

This renewed attention on the connected home also looks set to stir up the competitive space for industry leader and newly listed ADT.

Threat to the frontrunner

ADT, which recently spun off from tech conglomerate Tyco, is arguably the leader in the connected home space with a 25% market share of the $11bn market for security and home automation, according to a recent investor presentation. The big debate raging around ADT is whether the firm will hold on to its over six million customer base as new web based automation and security services enter the market; a trend that looks set to accelerate given the recent architecture announcements.

ADT has already launched its Pulse system which offers some third party integration, and was recently rumoured to be in talks with Nest about a potential partnership. Whether or not Nest users, who can monitor their homes' temperature through smartphones, will pay for ADT's service remains to be seen. One trend that has mirrored the rise of Nest has been an increased appetite to sell ADT shares short in recent months. The percent of ADT shares now out on loan stands at a very high 21% of shares outstanding. This makes ADT the 5th most shorted firm in the S&P 500.

The current level of short interest represents to an all-time high for ADT after climbing in the wake of the CES product launches. Short sellers have a good track record in ADT and the previous surge in short interest was followed by a 25% drop in ADT's share price, owing to a disappointing earnings announcement

Not much love from the street

Despite touting its potential for growth in the space, analysts have not been enthusiastic about ADT in recent months, as the company has seen its sink rank in Markit Research Signals' 3-M Revision in FY1 EPS Forecasts factor. This factor, which gauges analyst sentiment for the coming year, used to see ADT rank among the top 10% of US shares, but a recent slate of estimate downgrades in the last few months now sees ADT ranked among the worst third of stocks. 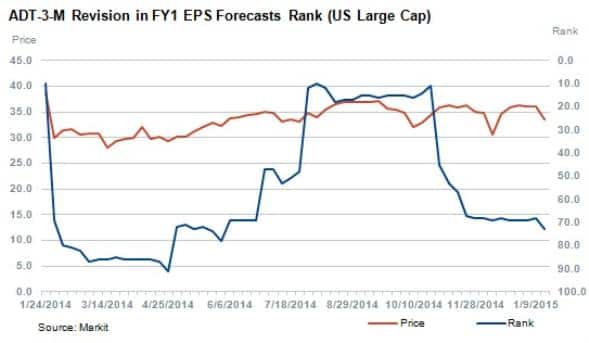