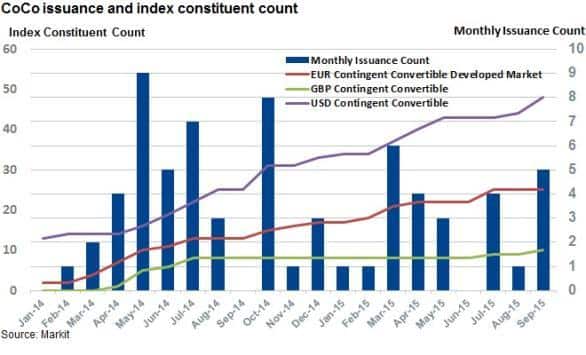 Financials debt has proven to be one of the areas of relative strength in the current market with the Markit iBoxx $ Banks index and broader iBoxx $ Financials index both delivering positive total returns in the year to the end of August. This relative performance also hold true on the other side of the Atlantic with the iBoxx &#8364; Financials and iBoxx &#8364; Bank indices outperforming the wider universe of Euro denominated investment grade bonds by 40bps and 50bps, respectively, over the same time period.

The outperformance was largely driven by falling risk perceptions as the index option adjusted spread of both the Euro and USD bank indices have performed better than the wider bond market. Falling risk perceptions have been most felt on the subordinated segments of bank balance sheets with the Markit iBoxx &#8364; Banks Subordinated and iBoxx $ Eurodollar Banks Subordinated indices outperforming their more senior peers since the start of the year.

This trend has also held for the most subordinated portions of bank balance sheets, the relatively new contingent convertible bonds (coco) issued by banks to meet capital requirements in the wake of the financial crisis.

The coco bonds issued in both euro and dollars by developed market issuers have largely outperformed all segments of the already high flying bank debt in the last few months. Both the Markit iBoxx USD Contingent Convertible Developed Market and iBoxx EUR Contingent Convertible Developed Market indices have returned more than 5% since the start of the year. 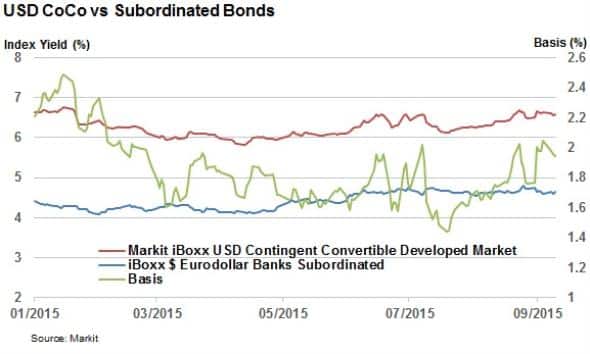 These returns are partly attributed to falling risk perceptions seen by bank debt in general as well as the relatively generous yield which contingent convertible bonds offer. The latest yield on the USD and EUR denominated developed market indices stood at 6.6% and 5.6%, respectively, despite the falling yields. 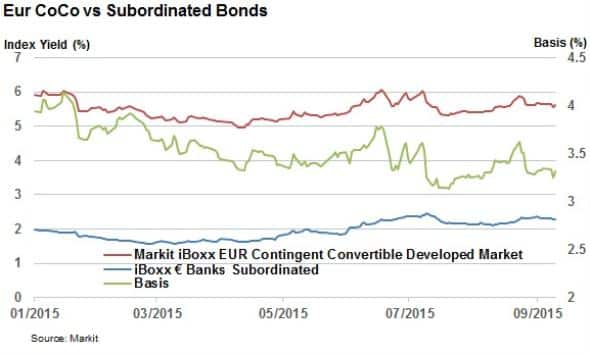 The coco premium over subordinated debt has also been coming down over the course of the year as the yield differential between the Markit iBoxx EUR Contingent Convertible Developed Market and iBoxx $ Eurodollar Banks Subordinated indices has tightened by 60bps from the start of the year. Dollar denominated issuance has also seen the same trend with the coco spread falling by 26bps in the last nine months.

Coco bonds have also moved on from "bulge bracket" issuers which were early adopters, as seen by the recently announced 1bn AT1 issue from ABN Amro. Investor demand for the asset class also looks to be healthy as the Dutch bank's offering was over three times covered, according to Reuters.

What does the increasing adoption of ESG metrics mean for data management functions? In an interview with A-Team Gr… https://t.co/SUVGFyQa6W