The minutes from the latest Bank of England Monetary Policy Committee meeting reveal that the likelihood of interest rates rising this year has fallen. It looks like hikes are now not likely until 2016, and there's even a growing chance that the next move could perhaps be more stimulus.

Government borrowing costs fell on the prospect of base rates remaining low for longer. Two-year government bonds yields tightened soon after the minutes were released, having already dropped closer to 0.4% on the low inflation outlook in recent sessions, a level not seen since late-2013, prior to the economic upturn.

Two of the nine Committee members, Martin Weale and Ian McCafferty, dropped their previous calls to raise interest rates, resulting in the first unanimous decision to keep policy on hold since last July.

The concern among policymakers is that inflation expectations could become entrenched at a worryingly low level, especially if interest rates were raised. Inflation has already slumped to a 14"-year low of 0.5%, and the recent decline in oil prices suggests it could fall even further below the Bank's 2.0% target in coming months. 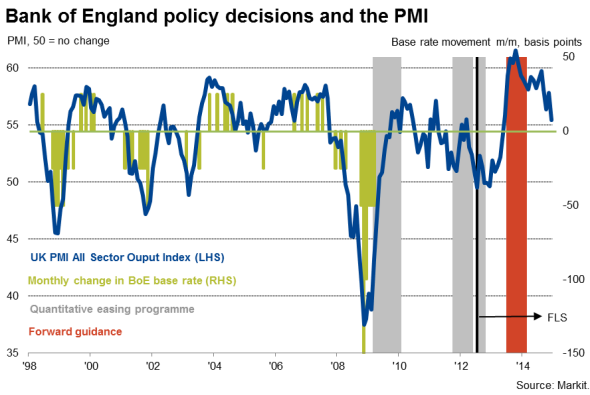 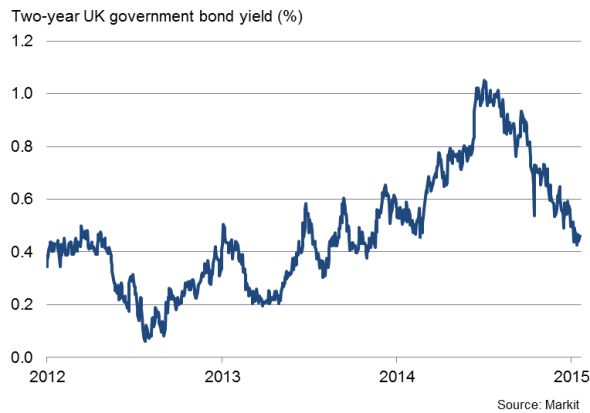 The minutes also showed policymakers sounding relaxed about the economy maintaining the strong pace of growth seen in the third quarter of last year, when GDP rose 0.7%. Falling oil prices, the minutes note, could also act as a significant stimulus via higher consumer spending.

But a gloomier view is perhaps justified, which could feed through to even lower interest rate expectations in coming months. Recent PMI surveys signalled a broad-based slowing in the economy late last year, hitting a one-and-a-half-year low.

The PMI surveys suggest GDP growth slipped to 0.5% in the fourth quarter, down from 0.7% in the three months to September. The all-sector PMI is in fact moving closer toward territory which has in the past caused the Bank of England to loosen policy.

The global economic backdrop has likewise deteriorated, notably in the eurozone and across many emerging markets, leaving the global economy overly dependent on the US, which is itself now showing signs of slowing.

There's still an outside chance for rates to rise later this year, but it would require wage growth to continue to revive and for policymakers to see clear evidence that falling oil prices are driving a substantial upturn in consumer spending, as well as a significant improvement in the eurozone economy.

The catalyst for the latter may come tomorrow, in the form of more aggressive stimulus by the ECB as it looks set to announce full-scale quantitative easing. However, even if QE works, it will take time for the euro area economy to show signs of healing.

Meanwhile, domestic wage pressures are picking up, but with total average weekly earnings rising at an annual rate of just 1.7% in November, there's clearly a long way to go before policymakers get rattled by the potential for a wage-price spiral to develop.

UK rate rises before 2016 therefore look to be only a remote possibility, though the data flow in the next two months - both domestic and global - will provide an important steer, most notably giving an insight into whether the economy has maintained the strong growth seen in the latest GDP data, or whether growth is waning, as the PMI suggests. 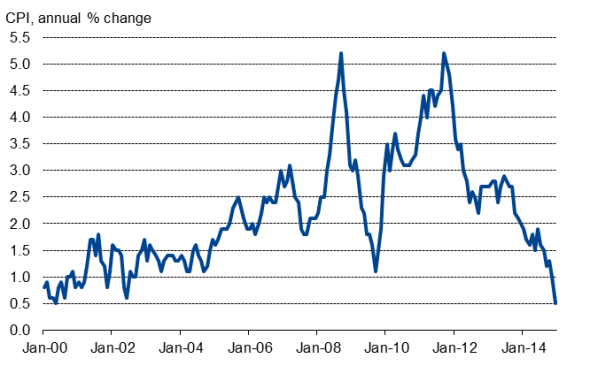 Global Sector #PMI data shows broad falls in output across all sectors in May led by Tourism & Recreation, while He… https://t.co/0Qqado2wGJ

Europe Sectors #PMI data saw most output indices improve in May, but remain firmly in negative territory, with Tour… https://t.co/obFDlDCYjN