Even with the industry challenges, 2021 still delivered from a resource perspective. When we look at newly discovered conventional resources we can see from Figure 2 that 2021 delivered just over 13.8 Bboe (billion barrels of oil equivalent) from a total of 197 new greenfield discoveries. Approximately 30 of these discoveries have volumes of more than 100 MMboe (million barrels of oil equivalent) yielding a cumulative 11.2 Bboe.

As time passes, history indicates that resources increase as fields are appraised, estimates are refined, and further discoveries come to light. For example at the end of 2019 our discovered volumes for the year were 13.5 Bboe, but have subsequently increased to 19.4 Bboe through the aforementioned factors. The same applies to 2020 where volumes rose from 11.9 Bboe (year-end figure) to 15.1 Bboe a year later. 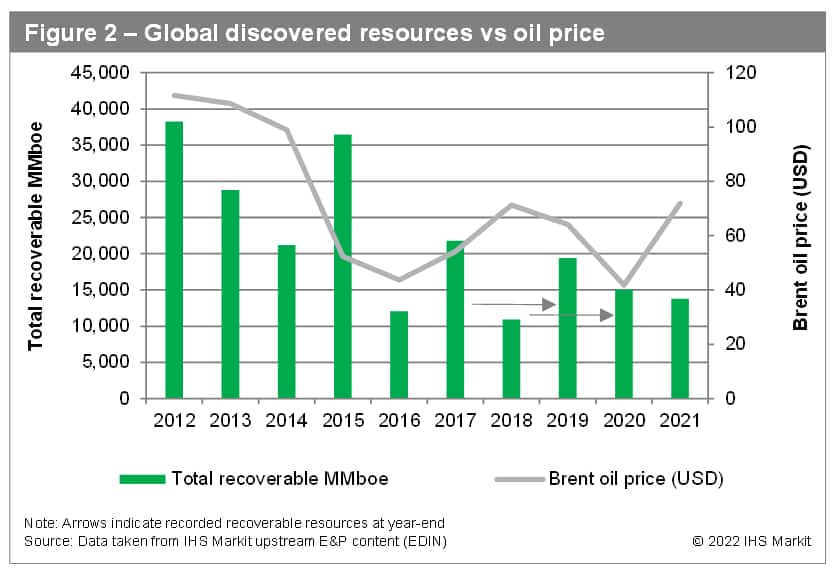 Over the last decade more often than not we have witnessed more gas being discovered than liquids but, at the same time we have also seen annual discovered gas volumes dropping, whereas the annual discovered liquids resource has remained fairly consistent. Notably, the discovered volume of liquids (oil and condensate) at 53% exceeded gas, which comprised 47% of total discovered volumes during 2021. In terms of discovered hydrocarbon type regionally (Figure 3), Latin America discovered over 4.6 Bbbl (billion barrels) of oil and condensate and 3.1 Bboe of gas, delivering vastly more amounts of new resource than any other region. Brazil was a large contributor to this, hosting four of the biggest discoveries in 2021. It should be noted that little information is available for these discoveries at the time of writing. In addition to these four Brazilian discoveries there were also two in Guyana and one in Mexico (Figure 4) which feature in the top 10 list. In other regions, Frontier North America (FNA), Europe, and Africa discovered more oil and condensate than gas, whereas the C.I.S, Middle East, and Far East regions discovered more gas. In Australasia no oil discoveries were made at all which is unusual, but it has been confirmed that oil targets are planned for drilling in the region in 2022. 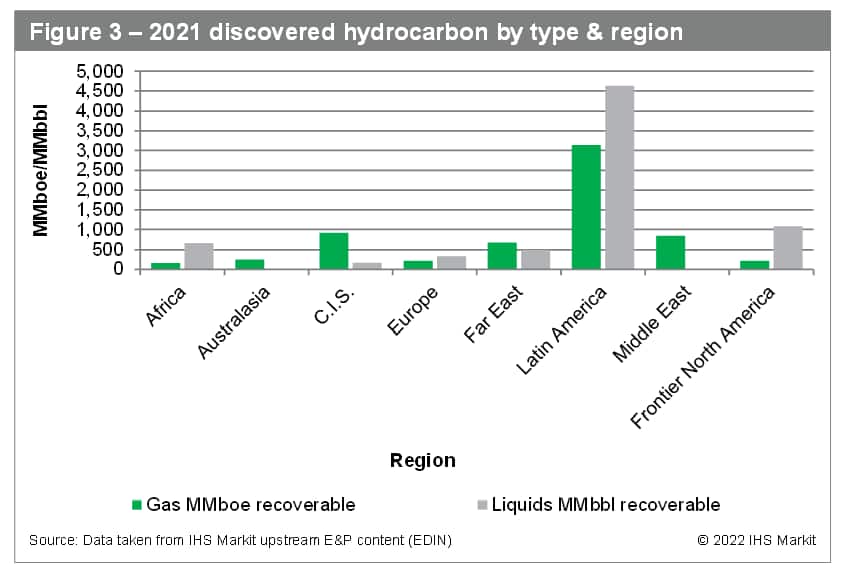 The year 2021 was a success for HIW drilling. It was a year in which the top 30 global discoveries, many of which were drilled with HIWs, yielded 82% of the discovered volumes. A total of 32 HIWs were spudded in 2021 with approximately two-thirds making discoveries of varying sizes and a handful of wells continuing into 2022. A number of these discoveries were large and HIWs in total contributed to nearly half of the newly discovered greenfield resources for the year. Latin America saw the most HIWs in any one region (17 in total) with eight HIWs in Brazil, five in Mexico, and the rest drilled in Guyana, Suriname, Peru, and Bolivia. While there were a number of succeses in the region as outlined in Figure 4, there were some notable disappointments such as Marissa in Brazil and Bacalar (previously known as Sayulita) in Mexico. Africa hosted the drilling of the Ondjaba and Jove Marine wells, along with the Graff, Venus, and Mlima wells which continued operations into 2022. The region bore witness to the success of the Baleine discovery which contributed more than two thirds of the total 2021 discovered resources in Africa. In FNA there were a number of successful wells including one big discovery in the Gulf of Mexico and two discoveries in the North Slope Basin in Alaska. There were two HIW discoveries in Russia during 2021, one of which yeilded significant resources as one of the top 10 biggest discoveries of the year and there was another HIW discovery in Azerbaijan. In Europe there were two small HIW discoveries in Norway and the Netherlands which did not contribute the significant volumes anticipated. Turkey provided one of the largest discoveries of the year in the Black Sea, which is proving a hot area for exploration in the region and in Australia there were two HIW discoveries with one yielding resources over 150 MMboe while the other was minimal. 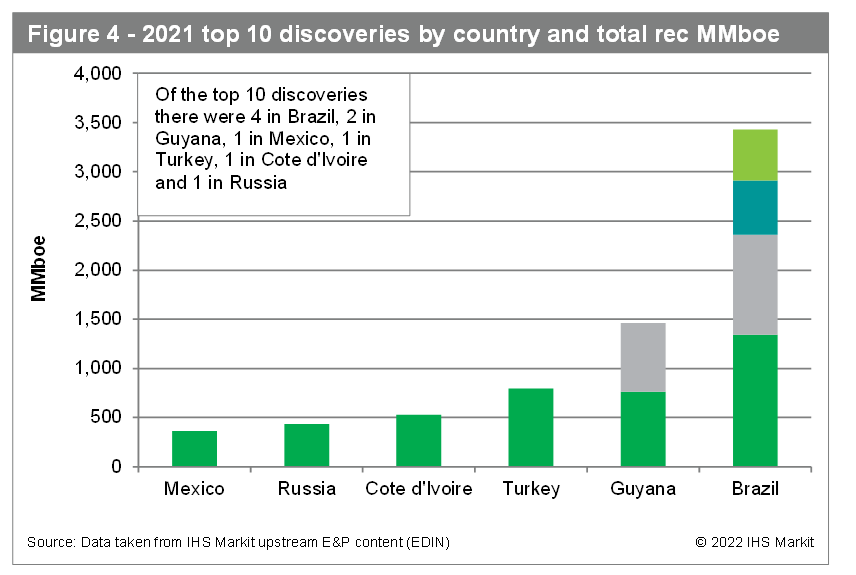 In recent years the energy transition has affected global exploration, diverting or even replacing what had previously been an explorers focal role; whether it be by constraining the geographical area of attention, targeting a specific hydrocarbon type, or pursuing value rather than volume through infrastructure led exploration. However, HIWs remain a fundamental aspect of exploration as proven by 2021 discoveries alone. HIW drilling for 2022 will continue to have a global bearing on exploration and there are some interesting wells planned for the forthcoming year.

IHS Markit estimates that around 20 HIWs are planned to be drilled in 2022, with an additional 6 wells which spudded in late 2021/ early 2022 and are due to complete in 2022. In addition, there are approximately another 15 HIWs that could also spud in 2022 which are classed as 'tentative' where uncertainty remains over their planned drilling status.

In Latin America, TotalEnergies' Marolo well in Brazil is already underway having been spudded in December 2021. Two other HIWs are also already operating in the country, Petrobras's Temisto well in the Santos Basin and its Alto de Cabo Frio Central well in the Campos Basin. Petrobras is potentially going to drill its Tutoia target too during 2022. ExxonMobil is planning to drill its Cutthroat well and the company may also drill two other targets, Atlas and Espinela. There are also a number of tentative wells in the region in Guyana, Mexico, and Suriname. In Europe there are planned HIWs in the UK (Edinburgh), Norway (Copernicus), and in Cyprus where a multi-well drilling campaign is planned, targeting a number of prospects including Cronos, Alphee, Eratosthenes, and Soupia. There is also potential for a well in Italy during the year. In Africa, the Venus and Graff wells in Namibia are already underway along with the Mlima well in Kenya. There are plans for two wells in Gabon (Seal and Tigre) along with HIWs in Republic of the Congo (Niamou) and Sao Tome and Principe (Jaca). There potentially could also be HIWs in Guinea Bissau (Gainde), Mozambique (Raia), South Africa (Gazania), and Zimbabwe (Mzarabani). Two wells are planned in the Middle East, one in Kuwait and one in Lebanon and there is also a planned HIW in Kazakhstan (Zhenis). Lastly, in Asia Pacific (APAC) two wells are scheduled to be drilled Australia (Erregulla South and Sansanof), with two additional wells which are tentative (Butler and Beehive). Two wells are planned in Indonesia (Rencong and Timpan) and one well is planned in Malaysia (Mersing). There are also tentative plans for drilling in Vietnam (Dan Day) and Papua New Guinea (Mailu). 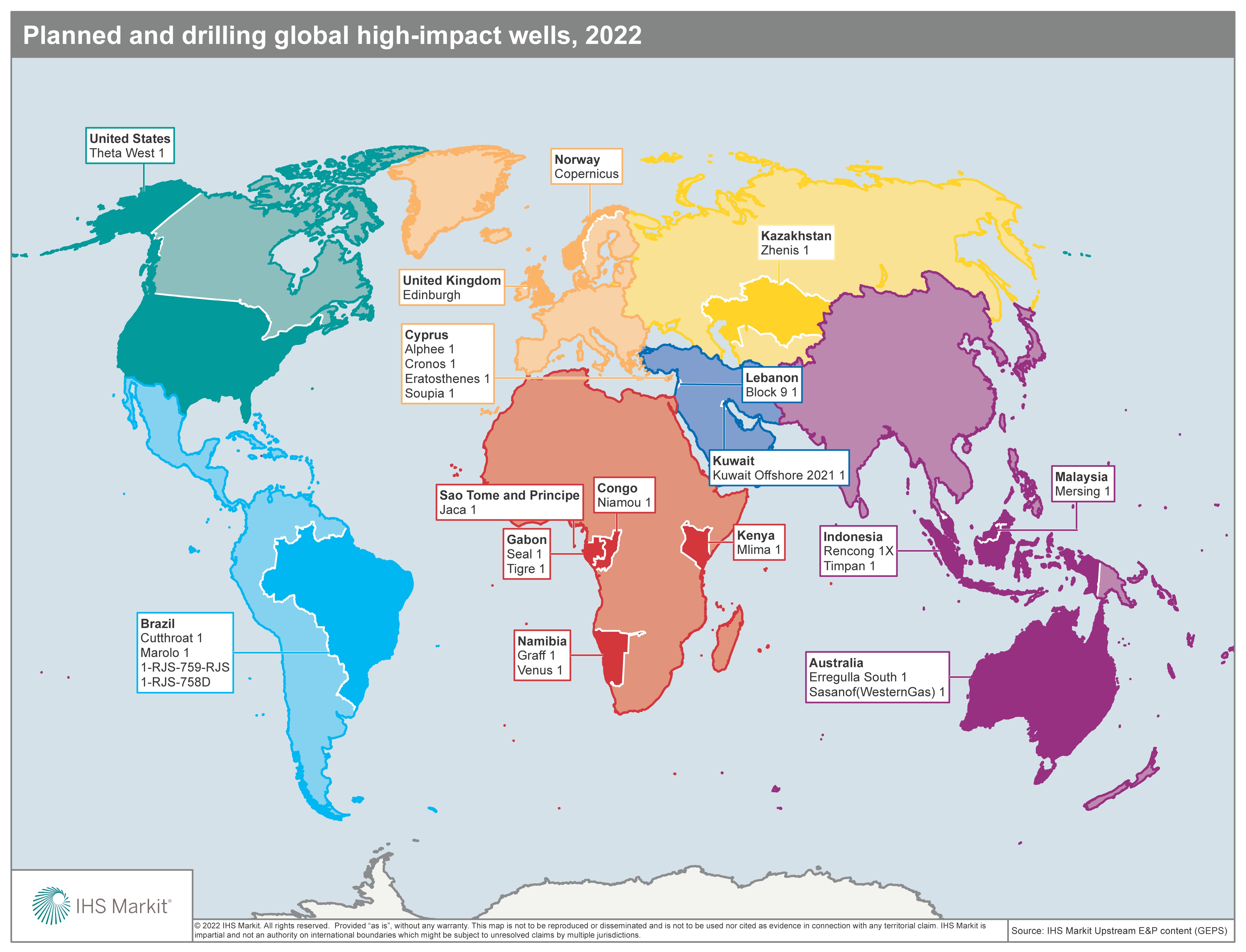