There has been a resurgence in exploration and appraisal drilling since the beginning of 2021. The number of wells drilled over the last six months (Figure 1) are comparable to levels last witnessed when oil was closer to USD 100. Contributory factors include a stable, reasonably high oil price and the fulfilment of well commitments delayed by the onset of the coronavirus disease 2019 (COVID-19) pandemic during 2020. 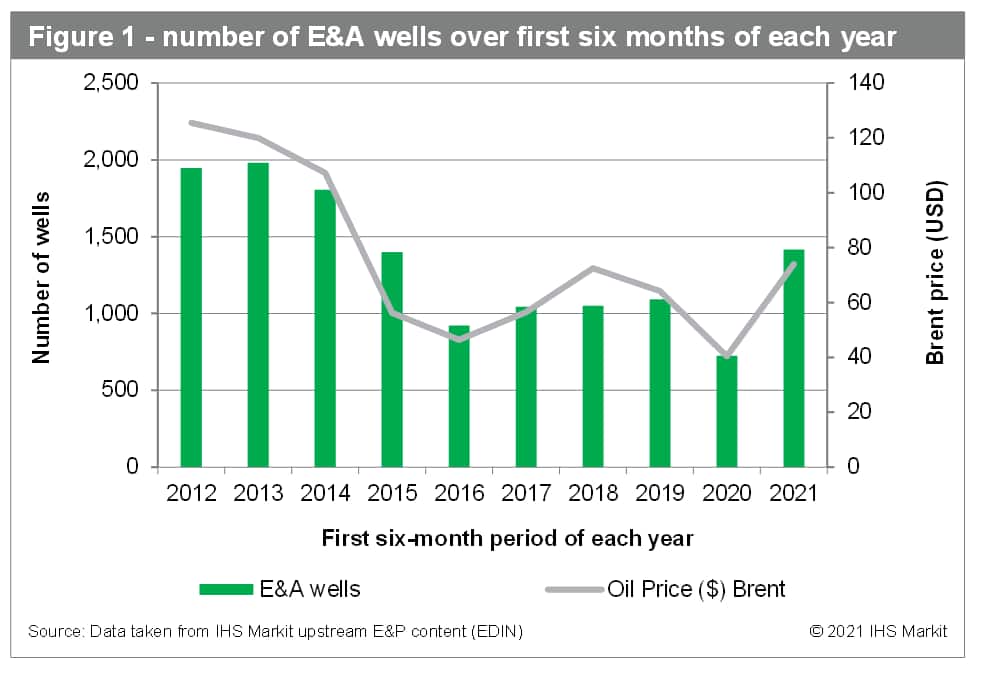 Figure 1: Number of E&A wells over first six months of each year

Focusing in on the drilling successes for the year; as of 1 July 2021 there had been a total of 82 new discoveries from pure exploration drilling. The Far East region, thus far, has seen the most discoveries with a total of 25, yet it contributes only 14% of recoverable resources discovered globally (Figure 2). In contrast Latin America has yielded significantly fewer discoveries, but the region has contributed 30% of discovered volumes in 2021. 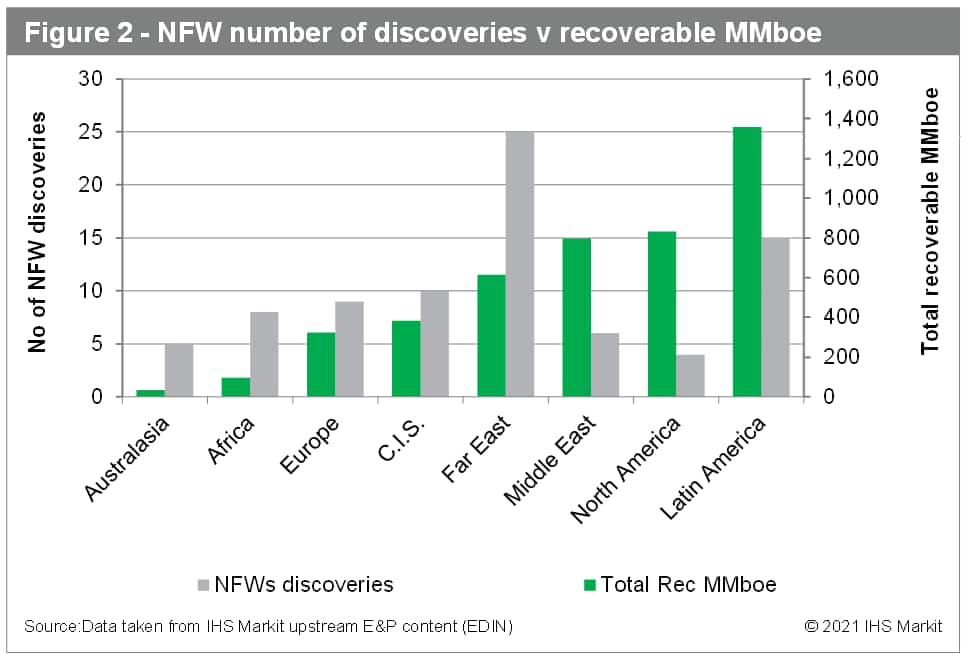 Of the 38 High Impact Wells (HIWs) we identified at the start of the year*, there have been a total of 17 HIWs spudded over the first six months of 2021. Of the 17 wells spudded so far; 5 are in Frontier North America, 4 in Brazil, 3 in Mexico along with 1 in Bolivia and 1 in Suriname to round off Latin America, 2 of the wells are in Norway and 1 is in Turkey. Of the top 10 discoveries so far in 2021 4 have been discovered with HIWs; the Sakarya North discovery in Turkey, Urissane in Brazil (2020 spud), Talitha in the United States and the Shafag and Asiman discovery in Azerbaijan (2020 spud).

The biggest discovery in 2020 was TPAO's Sakarya gas field in the Black Sea. So far over the first six months of 2021 the biggest discovery globally is TPAO's Sakarya North gas field. Both of these gas discoveries were made with HIWs - Tuna-1 and Amasra-1 respectively. Prior to the drilling and success of Tuna-1 a total of 18 exploratory wells had been drilled in the deepwater Black Sea, offshore Turkey, all registering oil and gas shows or dry holes. These two major discoveries were drilled in the frontier, western part of deepwater Black Sea, discovering a new play and plans are now underway to develop the fields. Tuna-1, located at 2,117 m water depth (WD), was reported to have discovered 14.3 trillion cubic feet (Tcf) of gas reserves in Pliocene-Miocene sediments, whereas Amasra-1, at 1,938 m WD, discovered a further 4.8 Tcf of gas. Sakarya is expected to be developed in three phases, the first of which includes the installation of a subsea gas production facility with further associated subsea tie-backs from both the Sakarya and Sakarya North fields. The second phase consists of the laying of a 155-km subsea pipeline which is to be installed at 2.2 km below sea level. This will export the produced gas to an onshore processing facility which will be built as part of the third phase of the development project. The initial drilling phase will include between 6 and 10 deep offshore production wells aiming to produce up to 0.35 billion cubic feet of gas per day (bcfg/d). During the second drilling phase, between 30 and 40 further development wells are expected once first gas is achieved. The project is expected to produce up to 1.4 bcf/d during peak production. The preliminary development costs are expected to be around USD 3.2 billion. Gas from the Sakarya field is expected to be consumed within the domestic Turkish gas market. This would provide Turkey with increased energy security, reducing any risk associated with relying on imports from Russia, Azerbaijan, and Iran as well as LNG imports from Qatar, the United States, Nigeria, and Algeria. In addition, this project is expected to supply competitively priced gas to drive down end-user prices. TPAO aims to achieve first gas in 2023 given the significance of the discoveries. However, due to the complexities of the deepwater gas field, the onstream date could be pushed to 2025 and it is deemed important that TPAO will partner with an IOC to develop the field which in turn could delay reaching that 2023 goal. Recent reports suggest a potential partnership with ExxonMobil and/or Chevron. ExxonMobil has prior experience within the Black Sea with its Neptun Deep project in Romania.

The second biggest discovery of 2020 was in Brazil with Petrobras's Aracuaria discovery in the Santos Basin. So far in 2021 the second biggest discovery globally is also in Brazil with Petrobras's Urissane discovery. Urissane is a discovery in the external frontier of the Campos Basin, outside of the "geographical" limit of the pre-salt, although it shares the same elements of the pre-salt petroleum system. The discovery of gas as the main hydrocarbon type over oil was slightly disappointing, but it does confirm the existence of an active petroleum system in the area. A second HIW, targeting the Mairare prospect, is drilling (as of early July 2021), targeting an analogue of Urissane in the same area. If the reservoir conditions are suitable and commercial oil is confirmed in the outer portion of the Campos Basin, then this would open a new frontier for development comparable to the Santos pre-salt. Although less desirable, if gas is discovered rather than oil, then new development projects are entirely feasible. Block BM-C-33 partners led by Equinor approved a gas and condensate development concept during March 2021 that could emerge as a model for future projects. It requires the installation of a FPSO on the main Pao de Acucar field, with the capacity of processing 126,000 barrels of condensate a day (bc/d) and up to 565 million cubic feet of gas (MMcfg/d), with tie-backs to the Seat and Gavea fields. The produced condensate will be exported via shuttle tanker, while gas will be exported through a new subsea pipeline to a dedicated receiving facility at the Petrobras operated Cabiunas terminal in Macae, Rio de Janeiro. The average gas export volume is expected to be in the region of 495 MMcf/d (14 MMm3/d) and it is anticipated that additional new discoveries in the area will prove economically viable to develop.

As can be seen for 2020 and the first half of 2021 the top two biggest discoveries globally have resulted from the drilling of HIWs in deepwater and relatively underexplored areas targeting new plays. The success of such wells suggests that frontier exploration is alive and well despite the more conservative attractions of infrastructure led exploration. The full report details the remaining planned HIWs slated for the second half of 2021. 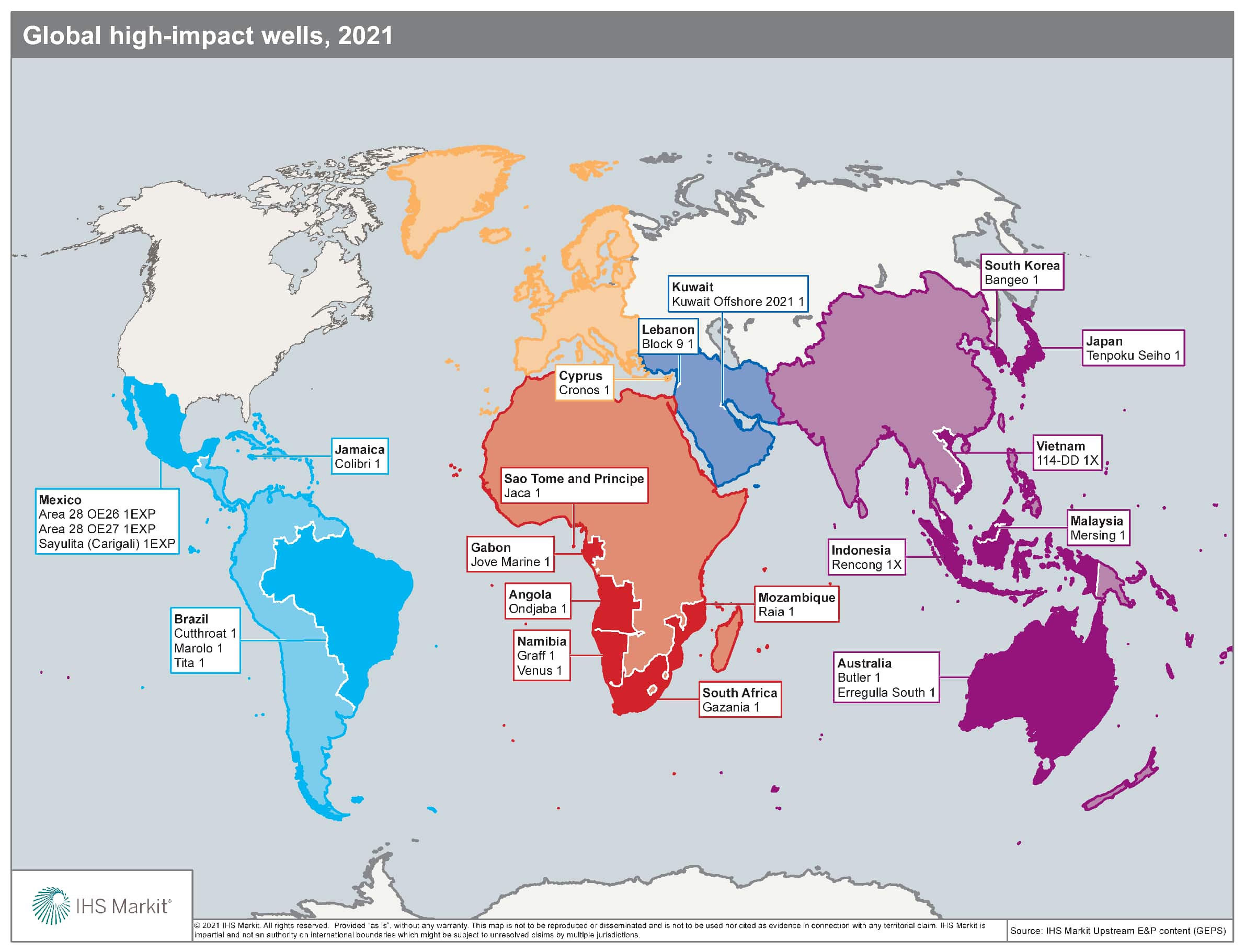 This is a snapshot of our more comprehensive High Impact Well Report, available to customers of our Global Exploration & Production Service (GEPS). Learn more about our upstream intelligence offerings.

Jack Rivers is Director of Global Content on the upstream energy team at IHS Markit.

*Clients can read the full January report. You can also read key highlights on our summary blog from January.