The 2020 Tokyo Olympic and Paralympic Games in Japan

The 2020 Olympic and Paralympic Games began officially in Tokyo on 23 July after being delayed from last year due to the COVID-19 pandemic. The event will be held without international or domestic spectators, and with Tokyo under a state of emergency restrictions for the duration of the Olympics. Commercial, dining and entertainment facilities in Tokyo are operating under reduced operating hours, alcohol sales are restricted, and attendance at large events are capped.

The Tokyo Olympic and Paralympic Games are taking place despite low levels of public support and rising COVID-19 cases in Tokyo.

Public support for the Games to go ahead has been consistently low, reflecting concerns about holding the event while the pandemic is ongoing. COVID-19 cases in Tokyo have been increasing from around 20 new cases of infection per 100,000 people in the week ending 23 June to 30 new infections in the week ending 7 July, according to Japan's National Institute of Infectious Diseases (NIID). NIID experts also estimated on 7 July that the Delta variant accounted for 34% of all infections in Tokyo and its surrounding prefectures. According to an Asahi news poll published on 19 July, 55% of respondents were opposed to the Tokyo Games going ahead compared to 33% in favour, and 68% were doubtful Games could be held safely. A number of athletes have also announced they would not attend the Games due to COVID-19. Anti-Olympic protests have occurred frequently in central Tokyo, and while most have consisted of several dozens of participants, over 100 people gathered in Shinjuku Ward on 23 June to call for the Games to be cancelled. Asked on 21 July if the Games might still be cancelled, the head of the Tokyo 2020 organising committee, Toshiro Muto, did not rule it out, unlike International Olympic Committee (IOC) president Thomas Bach, who on the same day said the cancellation was "never an option". While the government is unlikely to support a cancellation at this late stage, some sporting events might still be cancelled or delayed due to participants having to self-isolate after becoming infected with COVID-19 or coming into close contact with a confirmed case.

The Tokyo Games are closely tied to lower house and party leadership elections due later this year.

Despite public opposition, Prime Minister Yoshihide Suga has consistently maintained that the Tokyo Games would take place. Suga and the wider Liberal Democratic Party (LDP) appear to have taken the view that hosting the Olympic and Paralympic Games - branded the "Recovery and Reconstruction Games" after the Fukushima nuclear disaster in 2011 and now the COVID-19 pandemic - as central to the party's continued dominance in the lower house. The Games and decision-making over whether or not they should go ahead are therefore closely tied to upcoming elections in Japan: a lower house election is due by 22 October and LDP leadership elections are also due in September. While prospects for the LDP and its coalition partner Komeito (KP) to win a majority in the lower house vote are still strong, it is much less certain whether Suga will continue as LDP President and for how long. Suga's prospects depend on the LDP's performance in the lower house vote. Should the LDP perform well in the lower house election - through a strong majority or supermajority victory with KP - then Suga is unlikely to face a significant challenge from his party. Conversely, should the LDP perform poorly, then this would increase the likelihood of Suga resigning.

The decision to hold the Tokyo Games is a high-risk gamble for Japan's prime minister and the LDP given vaccine supply issues.

The vaccine rollout in Japan took off to a very slow start compared with other OECD countries. 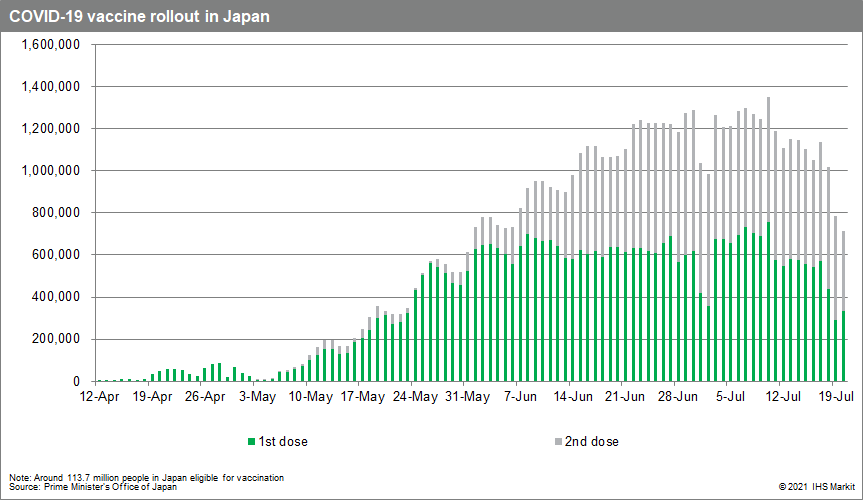 After accelerating in May and June following vaccine shipments and increased involvement from the national government in distribution, the rollout began to slow in July due to supply shortages. While the Japanese government and Tokyo Games organisers have implemented strict regulations for the event, including regular COVID-19 testing and isolation, COVID-19 infections are increasing within the Olympic bubble. As of 21 July, more than 70 people associated with the event had tested positive for COVID-19. With just 23% of the population fully vaccinated as of 19 July, failure to contain a COVID-19 outbreak in the Olympic bubble would damage public support for the governing party, particularly if the Games are directly linked to surges of the virus in the general population.