2020 was a year that is forever etched in all our minds. The COVID-19 pandemic forced the Indian government's hand to put the country in a nationwide lockdown for several months spelling doom for the economy's growth. India's GDP contracted 8.2% in 2020 as industries struggled to make ends meet amidst the ever-changing lockdown norms, unavailability of workers, restriction on movement of personnel and material. The Medium and Heavy Commercial Vehicle (MHCV) industry was one of the worst affected industries in the country as April 2020 saw the industry's sales volume at zero for the first time in its reported history. The industry did start recovering in the second half of the year with the third quarter more than quintupling the volume as compared to the second quarter. The fourth quarter yet again doubled the volume from third quarter but even with all these momentous growth figures, the Indian MHCV market ended 2020 at less than half of its 2019 volume, which itself was 26% below the 2018 peak. The Indian MHCV industry sales stood 152,000 units in 2020 as opposed to 333,000 units in 2019.

2020 is now in the past, economic activity has started to pick up pace and so has India's MHCV market. As per the latest Society of Indian Automobile Manufacturers (SIAM) data, the first quarter of 2021 saw 57% higher MHCV sales in India as compared to the previous quarter, but all is not as rosy as it seems. Recently, since mid-April 2021, India has seen a rapid resurgence in COVID-19 cases. The second wave of COVID-19 has already seen daily cases soar to over four times the peak of the first wave but is now starting to show signs of a slowdown as of 11th May 2021. The second wave has forced several state governments to announce lockdown measures for up to 4 weeks and this has also resulted in plant shutdowns at various OEMs. These lockdowns will bog down the economic growth in the immediate future and we estimate the economy to contract this quarter but overall a healthy year-over-year growth of 9.6% will help the economy regain its 2019 size. Industrial activity in the country fell more than 11% in 2020 but is estimated to regain its 2019 levels in 2021. The above-mentioned second wave is sure to delay the recovery of the sector and we estimate some pent-up demand to spill into 2022 as well.

Apart from economic factors, there are several market forces defining the future of India's MHCV market, the most noteworthy of them are as follows:

IHS Markit estimates India's MHCV sales to grow over 35% in 2021 exceeding 210,000 units. Heavy-duty trucks which account for over 55% of the sales in India are estimated to continue their dominance while buses, the worst-affected segment in 2020, are estimated to be the fastest growing due to low base effect. Tata and Ashok Leyland will continue to dominate the market, but Bharat Benz and Eicher are making strong strides and will pose a serious challenge to the stalwarts in the years to come. 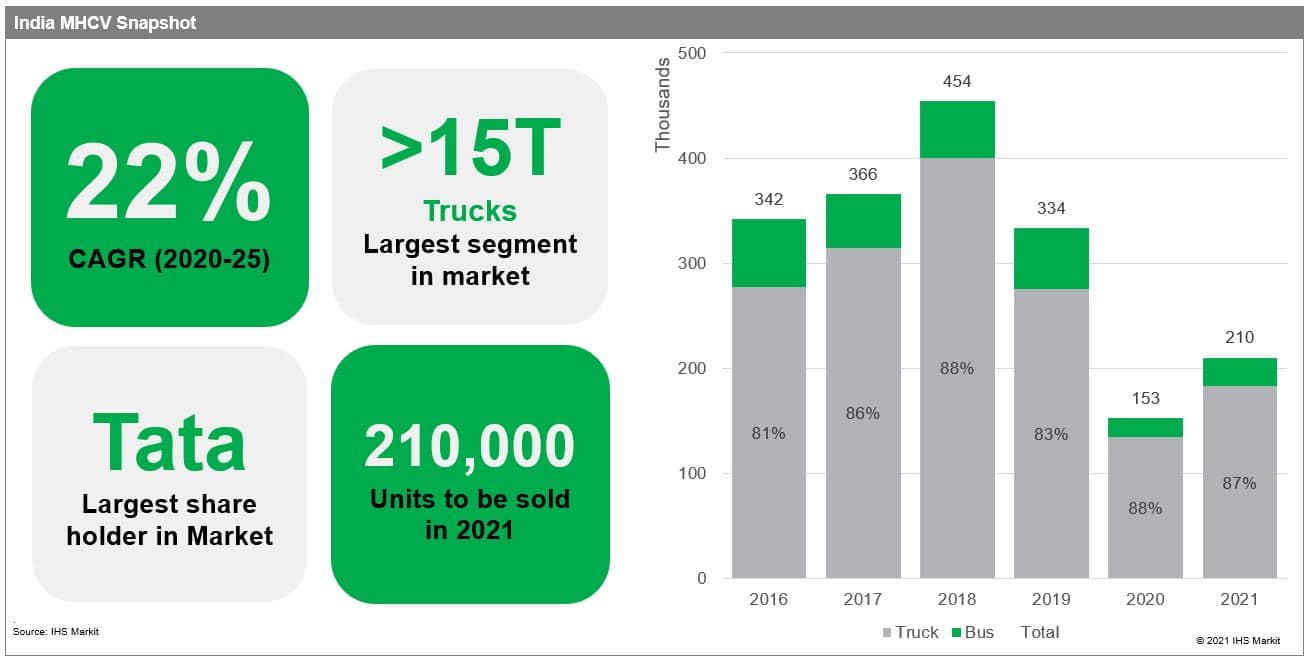