Bigger call sizes put more pressure on terminal quayside and yard operations and require an ongoing response from operators in order to optimise equipment and labour resources. Together with the additional investment required to handle bigger vessels, the increase in the volume of boxes handled during single calls may require more capital outlay, making it another causal factor in the ongoing squeeze on the traditionally strong margins of terminal operators.

Ports in northern Europe registered a 20% increase in call size over the comparison period, the largest globally, as mega-ship newbuildings were delivered and deployed on the key Asia–Europe trade route.

Average call sizes at ports in Southeast Asia rose by 15.6%, while growth in Africa was stagnant and a slight decline was registered in Oceania (see table).

North America is home to six of the top 10 ports with the highest average call sizes, topped by the US West Coast ports of Los Angeles and Long Beach, where average call sizes in 1H17 were 4,678 and 4,167 respectively. The data show one-fifth of all container moves globally now come in call-size batches of more than 3,000 moves.

The regions with a majority of throughput coming in moderate batch sizes of between 500 and 1,000 moves are Africa, Latin America, the Mediterranean, and Southeast Asia.

The average size of vessels calling at global container ports continued to increase over 1H17 and, given the make-up of the current orderbook, this trend is expected to continue in 2018.

Northern Europe saw a year-on-year (y/y) jump of 12% in the average capacity per vessel call and there was a 7% increase in the Middle East and India.

The average vessel size calling at ports in the Middle East and India is now 6,352 teu and 6,279 teu at ports in Southeast Asia, where almost half of all volumes are handled to and from vessels in the 4,000–10,000 teu range. This range continues to be the stock vessel size in the Middle East and India and in Southeast Asia as well, accounting for respectively 60% and 40% of handled volumes.

At the individual port level, Yangshan in Shanghai handled on average the largest ships in the world, at 10,475 teu per call, up 6% from 2016, followed by the English ports of Southampton (9,919 teu) and Felixstowe (9,105 teu). The trend of rising vessel sizes generally is seen as a challenge to port productivity. Terminal operators consistently complain that working on very large vessels is not efficient for them and that there is little benefit to doing so when the corresponding increase in call size is low.

Analysis of performance data at 12 of the world’s largest container ports over 1H17 seems to support this claim by indicating ports perform best on vessels in the 4,000–14,000 teu range, with a drop in productivity for both smaller and larger vessels.

“Smaller vessels, especially feeders, tend to list and trim; the cell-guides are less than optimal, and the ship is very far below the operator’s cabin,” said terminal operations expert Andy Lane of Singapore-based CTI Consultancy.

Performance of vessels larger than 14,000 teu most likely drops because of the need for higher spreader hoists and longer trolley distances as crane cycles take longer on ships that have 19–22 containers across instead of 13–19. Vessels of 4,000–14,000 teu are optimal for quayside performance as they are more stable and better equipped, but with fewer rows of containers.

Wait times – defined as the amount of time elapsed between the arrival of vessels at port limits and berthing – at ports around the world showed a 7% y/y improvement in 1H17.

Some regions showed a strong improvement in wait times, including northern Europe, which saw vessels berth in 4.3 hours on average, a saving of 1.4 hours per call y/y.

The best individual port improvers in this period were New York/New Jersey, where vessels got in to berth almost one-and-a-half hours faster than 2016; Melbourne, which saw a reduction in average wait times of one hour; and Qingdao in north China, which also saw a one-hour drop.

Despite the overall global trend towards improved wait times, some regions and individual ports showed a significant deterioration. In the Middle East and India region, vessels had to wait for an average of half-an-hour longer before getting in to berth, a rise of nearly 20% on total average wait time of 2.8 hours in 2016.

Colombo in Sri Lanka was one of the worst individual performers in the region, with an average of 5.8 hours elapsing before vessels got in to berth in 1H17, an increase of almost two hours compared with 1H16.

Berth occupancy is regularly high at Colombo, where the government so far has failed to agree on how to develop the planned Colombo East Container Terminal, which is being built to support an expected doubling in the port’s throughput to more than 10 million teu by 2025.

Elsewhere in the region, wait times at the ports of Karachi in Pakistan and Dammam in Saudi Arabia increased by an average of 0.5 and 0.8 hours respectively, while average wait times for vessels at Mumbai’s JNPT and Dubai’s Jebel Ali increased slightly to an average of about three hours.

Several Middle Eastern ports, including Djibouti, Jeddah, Khalifa, Khorfakken, and Salalah, showed a decrease in wait times for vessels in the first half of the year.

Vessels calling at Khorfakken got into berth in an average of 2.1 hours in 1H17, about 10% faster than the same period in 2016.

The deterioration in average wait time at the port of Manila in the Philippines was among the worst globally. In 1H17 it took an average of 2.8 hours longer for vessels to berth at terminals in Manila compared with 1H16, making a total average wait time of 6.2 hours.

Other ports where there was a deterioration in the wait time were Shekou in China (+1.9 hours), Port Said in Egypt (+4.5 hours), Bremerhaven in Germany (+2 hours), and Long Beach in California (+1.1 hours). The analysis showed that ports in key global production regions and destinations, such as China and the United States, deal with significant swings in volume of business depending on the day of the week.

Yantian at Shenzhen in south China handles 40% of its weekly business on Saturdays and Sundays, while Shanghai handles 36% of its business on Sundays and Mondays. In North America, heavily unionised labour means 37% of weekly business at Long Beach arrives on a Tuesday and just 7% on a Wednesday.

Counter-intuitively, the data show it is on these peak days when performance at terminals is at its highest. This is most likely because larger vessels call during peak days, creating the peaks, and terminals tend to work those vessels with the maximum number of cranes possible. 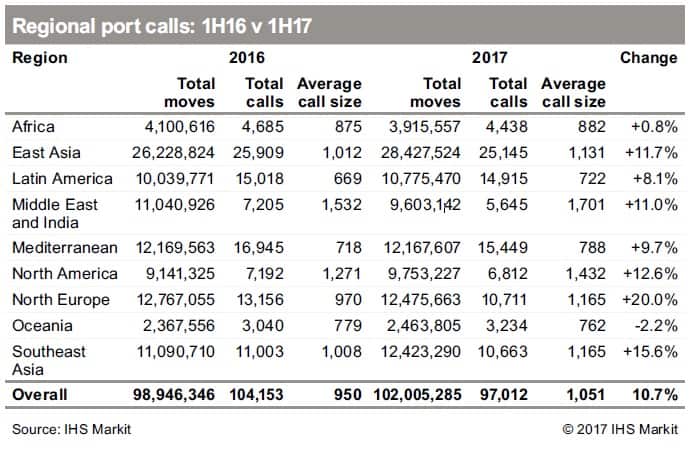