Holiday retail sales are expected to rise 4.1% above last year, which would be the strongest growth rate since 2014. Sales during the holiday season are the preeminent revenue generator for most retailers. Holiday sales in recent years have seen varying levels of strength. While 2017 is expected to surpass it, last year's 3.6% growth rate was decent. 2016 also represented an improvement from the 3.2% growth of the year before - but even this relatively weak showing was not as poor as it first appears. Holiday retail sales growth in 2015 suffered from the handicap of following on the heels of a red-hot 5.0% growth rate in 2014 - the best since 2010. The strength of retail sales growth in 2014, in turn, was a function of depressed 2012 and 2013 holiday retail sales - each of which were subpar for their own reasons, such as the payroll tax cut expiry in January of 2013, a government shutdown in October of 2013, and the impact of Hurricane Sandy in the last few days of October 2012. 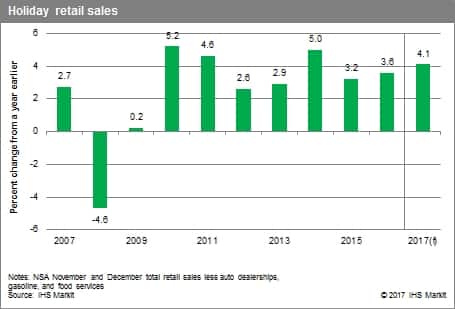 Consumer spending continues to be supported by elevated levels of confidence and solid gains in employment, real disposable income, and household net worth. The strong gains in equity markets will assist in boosting luxury and discretionary spending this holiday season. However, the recent hurricanes that plagued Texas and Florida are likely to divert spending towards rebuilding and replacement of necessary durable and nondurable goods for many American households.

Holiday retail sales this year will continue to cannibalize the traditional back-to-school retail sales season. Sales during the traditional back-to-school shopping season have been eroding at both ends. 2017 saw the third annual instance of Amazon's Prime Day in early July, which produced a bonanza of online sales thanks to heavy discounts during the one-day sales event. At the other end, retailers are pushing heavy price discounts typically associated with the holiday shopping season earlier and earlier. As bargains creep closer to Halloween, consumers are increasingly opting to wait to make purchases in early November - after the back to school shopping season.

Holiday clicks continue to outpace holiday bricks. While retailers as a whole are likely to have a good season, online-based merchants will continue to outperform their brick-and-mortar counterparts. Over the past several years, online retail sales have accelerated and are making a sizable dent in brick-and-mortar sales. Online holiday retail sales growth this year is likely to outpace last year's growth, going from 12.8% in 2016 to 13.1% this year. As a share of holiday spending, online holiday retail sales will reach a new high: last year, online sales represented 16.8% of holiday retail sales, and this year that share is likely to be 18.3%. Online holiday sales will only continue to gain market share, and many traditional retailers are being forced to adapt in order to survive. Online sales were considered chump change about 15 years ago - now they are a major game changer. 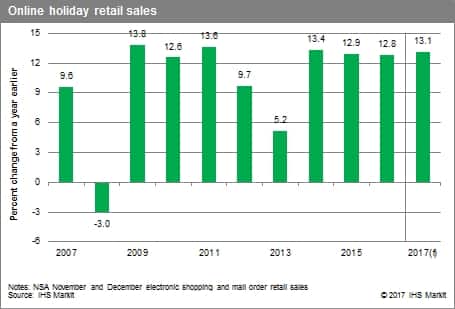 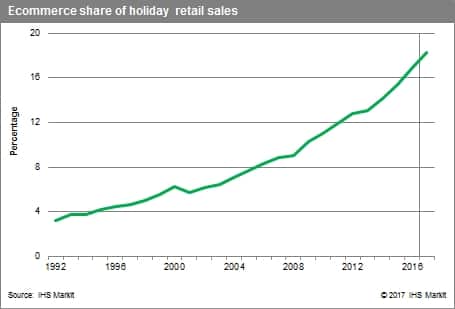 Bottom Line:This holiday retail sales season is looking rather bright, and the holiday clicks will far outpace the holiday bricks.