After a lackluster 2015, global defence spending rose in 2016 to $1.57 trillion, kicking off what is forecast to be a decade of stronger global defence expenditure, according to the annual Jane's Defence Budgets Report.

"Defence spending returned to a healthy rate of growth in 2016, kicking off what we expect to be a decade of stronger global defence spending," said Fenella McGerty, principal analyst, Jane's. "Defence spending should recover to pre-financial crisis levels by 2018." 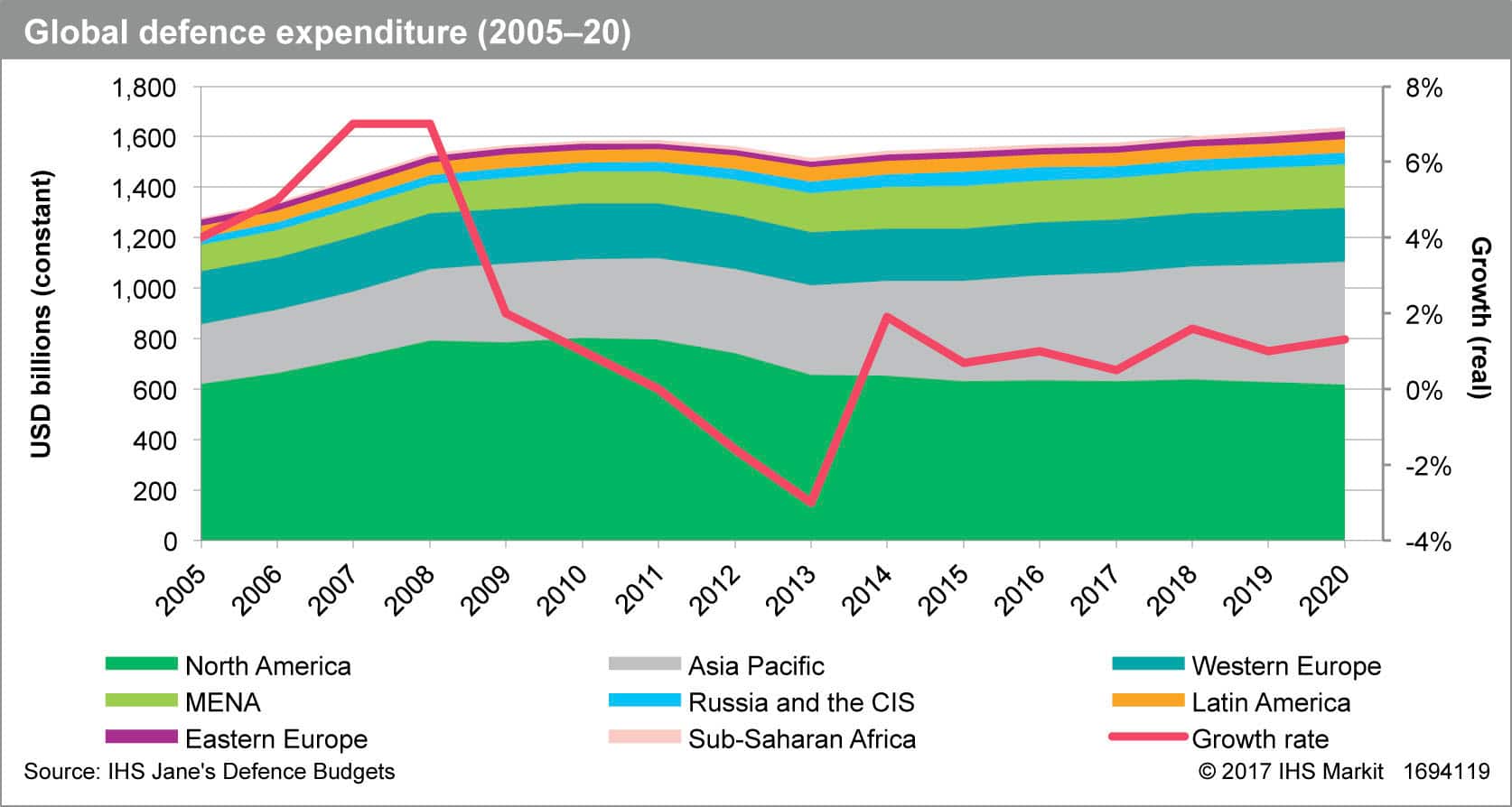 NATO defence expenditure increased in 2016 for the first time since 2010 as a result of an end to cuts in the United States and stronger growth in Europe.

"Fuelled by an increasingly uncertain security environment and growing international pressure, Western European defence spending increased for the first time since 2009 and we expect growth to continue to strengthen over the next decade," McGerty said. "However, growth could be set back if the region's economic recovery is derailed by the ongoing difficulties in Southern Europe as well as uncertainty surrounding the United Kingdom's negotiations to leave the European Union."

If a weaker pound persists, India will have spent more on defence than the United Kingdom by 2018, pushing it out of the top three. In 2015 the United Kingdom's defence budget was USD53.5 billion. It slightly increased to USD53.8 billion in 2016 and is projected to rise to USD55.1 billion by 2020. 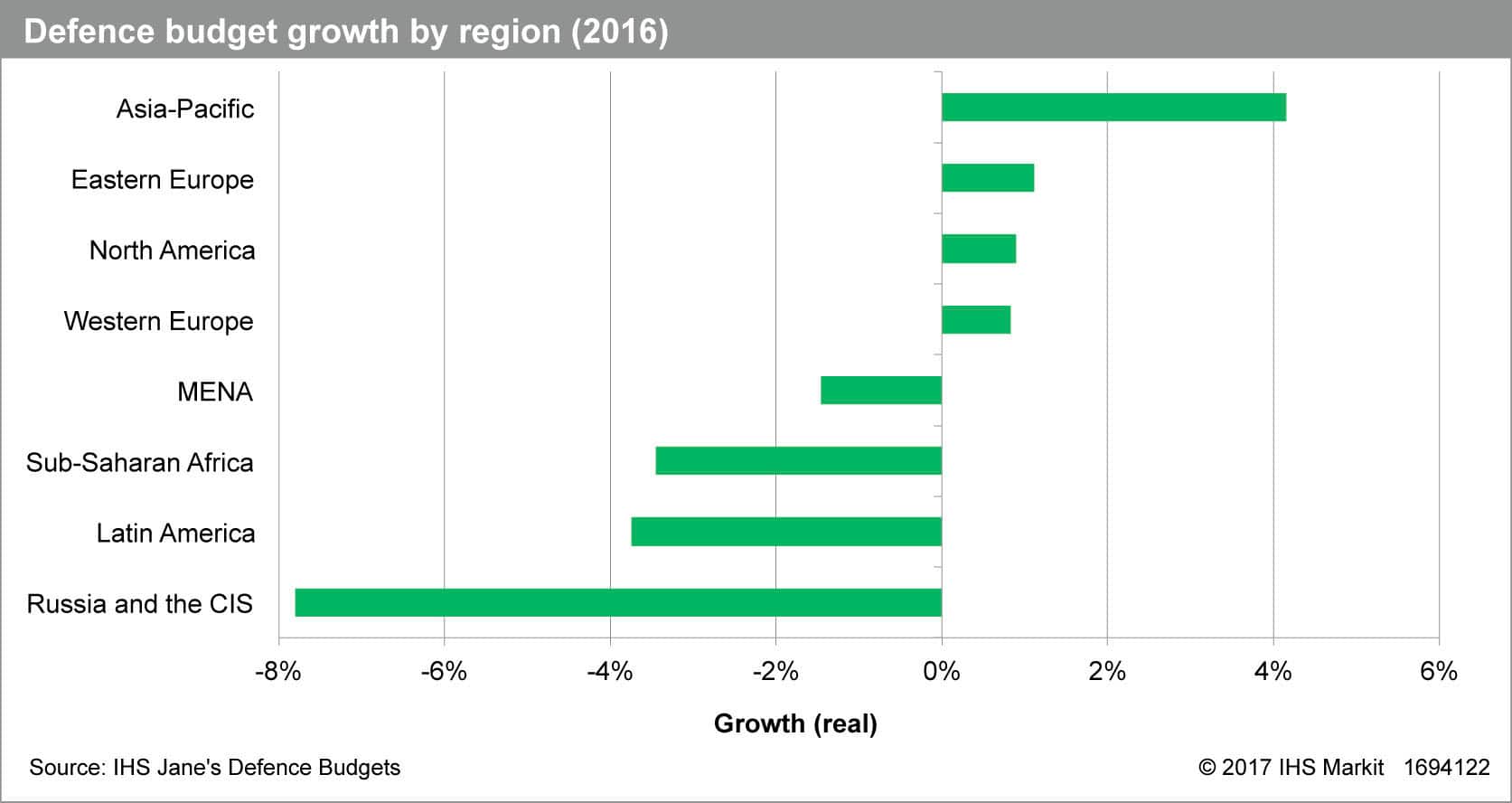 Defence spending in the APAC region has boomed in recent years, driven by economic expansion in the region. Rising tensions around the South China Sea could drive further growth.

Between 2011 and 2015 the key states surrounding the South China Sea spent USD166 billion on the procurement of defence equipment. Between 2016 and 2020 that number is expected to increase to USD250 billion, with priorities shifting towards air and naval capabilities.

"A key trend in APAC is the shift from a traditional focus on territorial defence towards power projection," said Craig Caffrey, principal analyst, Jane's. "This is new for the region and is likely to increase military-to-military contact between states. Rising defence spending could therefore be indirectly responsible for increased tension within the region which in turn could spur faster budget growth."

Japan's defence budget will hover around the USD41 billion mark between now and 2020. "Although the Abe administration has started to increase defence spending after a decade of cuts, there are still severe budgetary constraints in place in Japan," said Paul Burton, director, Jane's. "Japan cannot realistically match the kind of budget growth we continue to see in China, so the government is focusing upon spending its defence budget more efficiently and trying to provide more capability for the same amount of money."

"Procurement spending has been constrained in India over the last three years as personnel costs have increased," Caffrey said. "However, what we expect to see from 2017 onwards is a military focused on modernisation. India needs new equipment to fulfil its modernisation drive. Over the next three years, India will re-emerge as a key growth market for defence suppliers."

Middle East: Down, but not out

Despite fiscal concerns and a lower oil price, defence budgets in the Middle East are forecast to recover to the spending highs of 2014 by 2019 at the latest.

The Middle East was the fastest growing region in terms of defence spending between 2012 and 2014, although spending has since dipped due to the dramatic drop in oil prices. However, even at the 'low point', regional defence spending in 2015 and 2016 will still be higher than 2013 figures.

"We've seen a pause in growth in the Gulf States as a result of the collapse in oil prices," Caffrey said. "However, generally speaking, defence has been protected from cuts due to regional instability. In the cases of Kuwait and Qatar, we've actually seen significant increases in defence spending."

Since the onset of the Ukraine crisis, defence investment in the Baltics has doubled and is expected to double again in the next two years.

"The profile of defence spending in the Baltics has changed dramatically in the past two years," McGerty said. In 2005 the region's total defence spending came to USD930 million in real terms. By 2014 this had grown marginally to USD981 million, but by 2016 it had soared to USD1.45 billion.

"Their defence budgets will all be over 2% of GDP by 2018, and each country will have doubled or tripled their budgets from 10 years ago. Annual growth in the region reached 27% in 2016 and by 2020 the region's defence spending will reach USD2.1 billion. This growth is faster than any other region globally," McGerty said.

Russia: Out of the top five

2015 is expected to represent the zenith of Russian defence expenditures for the foreseeable future. The 2016 budget included the first reduction in Russian defence expenditures since the late 1990s, as well as Russia dropping to the number six position - the first time it has been out of the top five in years. "The surge in Indian defence spending pushed Russia below Saudi Arabia and down into the number six slot," Caffrey said. "We expect the Russian defence budget to fall again next year and it will sit below France in the number seven positon by 2020, based on current plans, with a total defence budget of USD41.4 billion."

US: Still the world leader

"Since 9/11, over USD9.35 trillion has been allocated to the US defence budget, with the Overseas Contingency Operations (OCO) accounting for USD1.62 trillion or 17.3% of the total US Department of Defense budget," said Guy Eastman, senior analyst, Jane's. After the 2001 attacks a buildup took place through to 2010 to support operations in the Middle East and elsewhere, followed by decreasing OCO budgets and troop reductions, bringing the US Department of Defense (DoD) budget to the 2016 value of USD622 billion.

"US DoD investment levels going forward were to decrease by 1.1% in real terms, but with the election of Donald Trump, the expectation is that both investment and readiness will receive injections of much needed funds," Eastman said.

About 45% of investment funding will go toward procurement and modification of aircraft, ship, submarine, and military ground vehicle platforms. When the new administration took office in January 2017, actions toward the proposed goals to increase ground forces, and increased ship and tactical aircraft numbers and readiness levels commenced along with RDT&E investment in innovation, according to the Jane's Defence Budgets Report.