Last week's Frankfurt auto show was all about electric cars and speculations about when this technology will start to phase out established internal combustion engines. Although piston heads have nothing to fear in the near term, the momentum towards growing electrification has the market salivating about the prospects of which firms will benefit from the potential gold rush. One such sector is lithium producers, who mine a key component of the batteries powering the recent revolution.

This rush into the sector made lithium stocks some of the best performers in the current bull market. The Global X Lithium ETF (LIT), which invests in the sector, mirrored this buoyant mood as it returned more than 50% so far this year. Most of these phenomenal returns occurred over the last month, as automaker executives set out their vision for all electric lineups. Investors are taking notice of these returns and have poured more than $327m into LIT since the start of the year. This surge in new money pouring into LIT " which represents roughly three times the assets managed by the fund in January 1st " shows no signs of slowing down, as the fund has seen inflows of $116m in the first two weeks of September alone.

Shorts stick out the rally

Short sellers have been on the wrong side of this recent rally. They increased their bets across LIT constituents by a third between January and the middle of August.

Bears are now facing large paper losses from their bets in lithium related stock, and have shown little appetite to shy away. Average shorting activity across LIT constituents increased in the last four weeks to 4.7% of shares outstanding - the highest in more than two years. 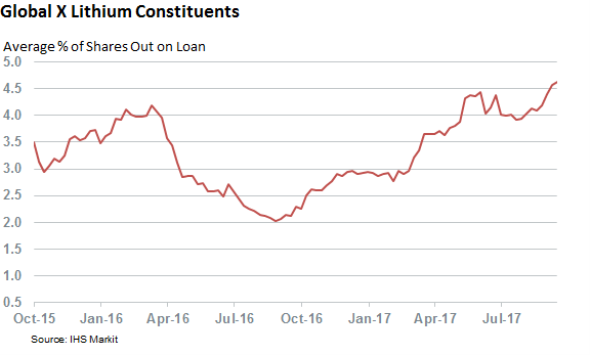 The high conviction plays are two relatively small Australian players: Orocobre and Galaxy Resources, which have seen demand to borrow their shares more than double since the start of the year.

Short sellers haven't been content playing in smaller lithium producers. Albemarle, the world's largest Lithium producer, has also seen a large jump in demand to borrow its shares in the last few months. Vindication seemed to be in order for their bearish views on Albemarle, given the company announced disappointing earnings back in early August. However, the ensuing slump in the Albemarle's shares was only temporary, and they have since rallied to a new all-time high. 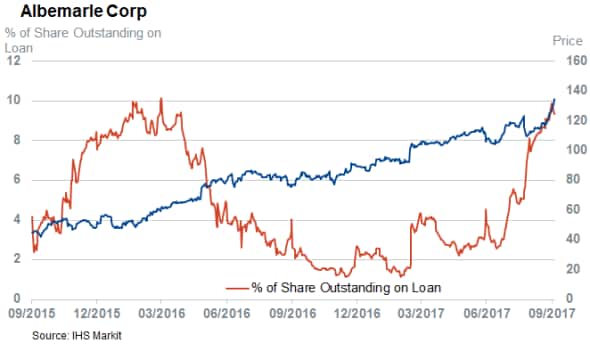 Two names which are noticeably absent from the list of short targets are FCM and SCM. Both firms join Albemarle at the top of the list of the world's largest lithium producers.

FCM and SCM have less than one percent of their shares out on loan, which is about a fifth of the sector average. The recent lack of SCM shorting activity is noteworthy, as the firm had sustained short interest 18 months ago with about 8% of shares on loan. 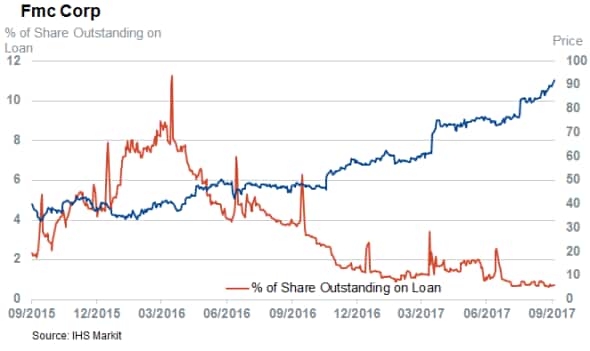