The European Central Bank left interest rates and its quantitative easing programme unchanged at its July meeting, and also made no change to its forward guidance.

The lack of policy action was fully expected. However, given Draghi's recent Sintra speech in which reflationary forces were cited as replacing deflation, expectations had risen that the ECB may at least announce that it was starting to think about when might be the right time to taper its asset purchases. However, such hopes proved ill-founded.

As previous bouts of policy tightening in 2008 and 2011 were swiftly reversed, as the timing proved inappropriate, it's no surprise that the ECB is in no rush to make the same mistake again.

With PMI survey gauges of both business activity and inflationary pressures falling in June, albeit still at historically high levels, the dovish stance becomes even more understandable. The softer survey data perhaps also helps explain why the ECB reiterated that it could increase its "60 billion per month asset purchases if the economy worsens.

Draghi repeated that the Governing Council would discuss changes to its quantitative easing in the autumn, which presumably just about keeps the door open for an announcement at its September meeting. Next week's flash PMI data for July will provide further policy guidance, and will help ascertain not only whether the asset purchase programme for 2018 will be tweaked, but also in which direction. 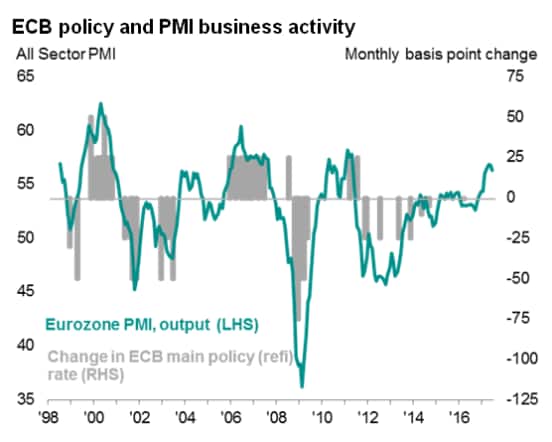 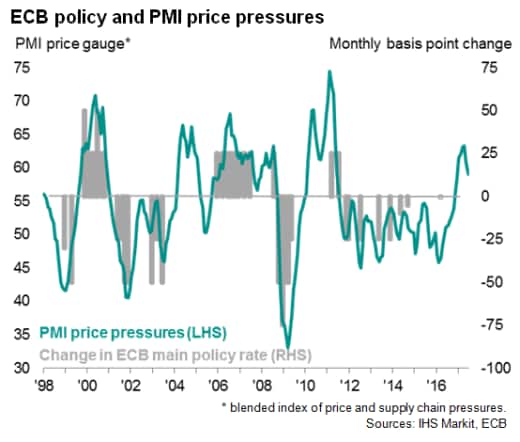