Turkey, one of the largest issuers of emerging market dollar denominated debt, has seen a rise in credit risk in the wake of last week's coup attempt and the resulting crackdown, but investor appetite for the asset class has remained undeterred.

Last week's failed Turkish coup, and the resulting crackdown has spooked holders of Turkey's dollar denominated government bonds. Gauged by turkey's CDS spread, the market's perceptions of the country's credit risk has jumped by more than a quarter from its close on Thursday. Investors are now requiring 283bps of annual premium to ensure Turkish bonds against defaults, the most since February. 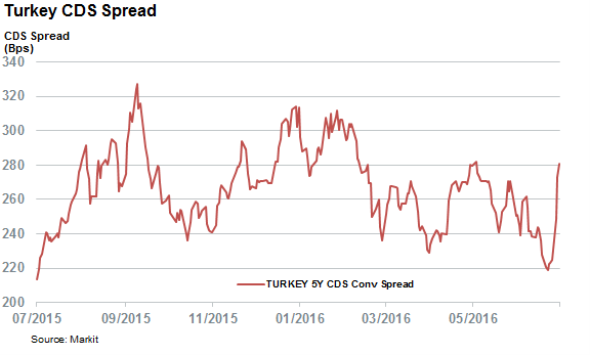 The majority of the recent widening has happened since Monday's close which shows that the market is equally worried about the escalating scale of the crackdown as well as any direct impact from the coup.

Despite the recent surge in spreads, Turkish CDS are still way off the lows seen after last year's inconclusive elections when spreads reached 327bps.

Turkey's surging spreads are not reflective of investor sentiment in the wider emerging market world as only four of the 68 constituent countries of the iBoxx USD Emerging Markets Sovereigns index have seen their average spreads widen in July so far. 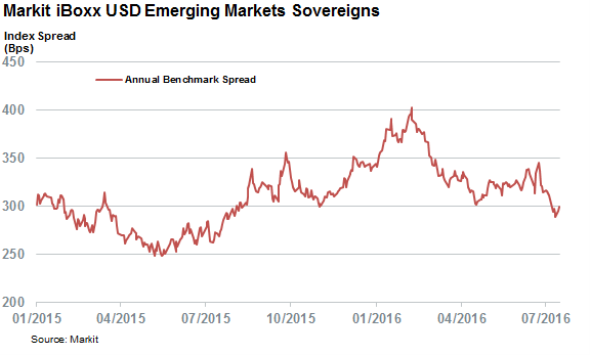 This trend has ensured that the asset class is now trading 21bps tighter to US treasuries with the index now spread below the 300bps mark for the first time since August of last year.

While you could be excused for thinking that Turkey's recent upheaval could be enough to put a pause to the investor's insatiable appetite for emerging market bonds, especially since Turkey is the largest constituent of the iBoxx USD Emerging Markets Sovereigns index with a 9.6% weight, the Markit ETF analytics database has seen no signs of this. In fact, investors poured nearly $400m into the 48 emerging market bond ETFs in the two trading days since the coup, extending the asset class's inflow streak to 15 days. 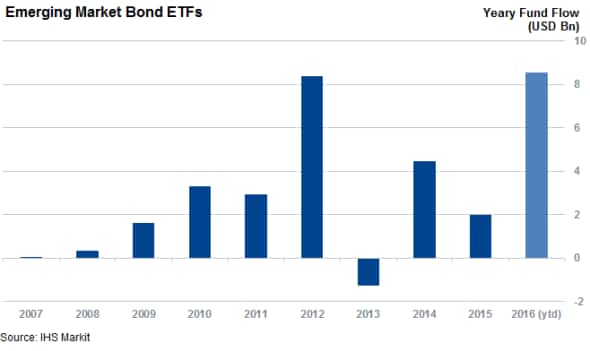 In a recent interview with Finextra, our own Mark Findlay and Abhay Pradhan discuss how migrating capital markets a… https://t.co/cGLx3f9ZX2

Join us for an informative two days of interactive breakout sessions as we highlight next-gen, cutting-edge technol… https://t.co/pbcmkwBdly