US corporate bonds yields are down significantly since the start of the year, which has seen investor sentiment turn among firms most heavily reliant on debt in order to fund themselves.

The bond market was bracing itself for a further wave of fed tightening and equity investors were in turn actively shunning companies which are most reliant on debt in order to fund themselves. This trend saw the 10% of US equities which have the highest net debt ratio* according to Markit Research Signals, underperform the market by over 15% on a sector neutral total return basis. 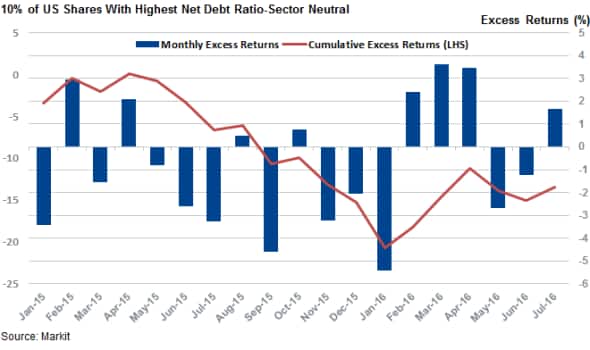 The bond market fears proved unfounded as yields in both high yield and investment grade bonds have fallen by a significant margin year to date. This trend, driven by falls in both underlying treasuries and the extra yield required by investors to hold riskier corporate bonds has seen the yields in both asset classes fall by more than a fifth to their lowest level in over 12 months. 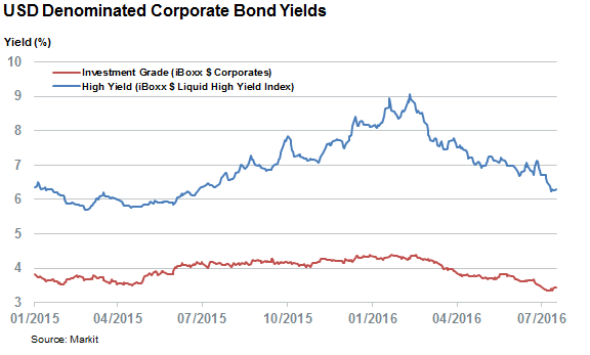 These falling yields have in turn seen the shares of heavily indebted companies regain some of the ground lost over the fed driven bond market headwinds.

While shares of companies with high net debt ratios continued to slide in January, just prior to the high water mark for junk bond yields, these firms have outperformed the market for four of the last six months. The trend proved particularly strong in March and April when their shares outperformed the market by 3.5% for two successive months. The rebound is continuing in July where debt reliant firms have delivered higher than average returns of 1.6%.

Short sellers, which had positioned themselves to profit from further underperformance in debt reliant firms, have been actively covering their positions since the start of the year. 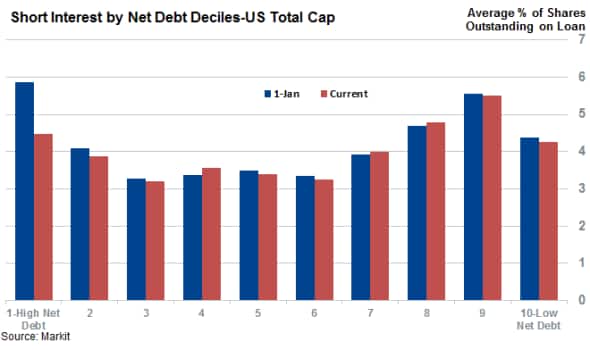 The most heavily indebted 10% of US traded companies at the start of the year had 5.9% of shares shorted on average which made them the most shorted group. The same group of shares now see 4.5% of shares shorted on average, a drop of nearly a quarter since the start of the year which is over five times the average covering seen among the entire US total cap universe over the same period.

The covering has been led in large part by energy and commodities firms which made many of the high conviction shorts heading into the start of the year. The stabilisation seen in oil prices, as well as rebounds in precious and industrial metals has seen shorts rush to cover their short positions as seen by the fact that energy names make up nine of the ten most debt reliant firms which have seen the largest amount of short covering ytd.

While some of the covering has been driven by profit taking, firms such as Sunedison, Westmoreland Coal and Southwestern Energy have seen short sellers capitulate in the wake of large losses. The former has seen its shares nearly double ytd which has prompted short sellers to cover two thirds of their positions.

The Markit Research Signals net debt ratio is the net debt divided by the sum of the net debt, preferred stock and common stock. Net debt equals the long-term debt plus short-term debt minus cash and equivalents. Shares with high net debt ratios are the most reliant on debt in order to fund themselves.

The analysis was run using sector neutral excess returns from the US Total Cap universe of 3,300 companies representing 98% of US equities by market cap.