Unlike the rest of its emerging market peers, Turkey's bonds have continued to widen since the start of the year

Slowing growth and a central bank at odds with its increasingly powerful president has left little to cheer for Turkish bond investors. The country's currency recently hit an all-time low against the dollar; a trend that looks set to continue should the central bank yield to president Erdogan's low interest rate call.

The government had actively borrowed in dollars over the last few years and investors are now increasingly worried about the impact of the falling lira on the country's dollar denominated debt. 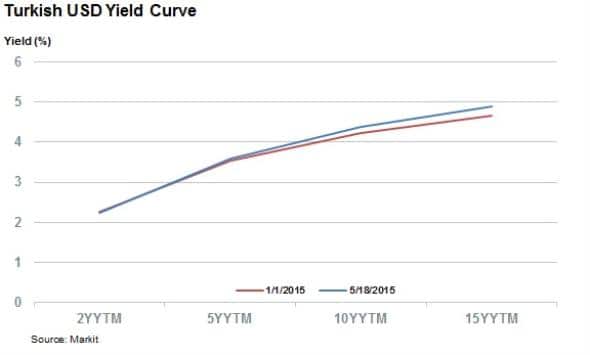 The falling lira has seen dollar denominated Turkish government bonds trade wider compared to the levels seen at the start of the year. All four points in the country's yield curve are higher than at the start of 2015; a trend which contrasts with tightening seen in the wider emerging market world.

The selloff has been widest in the more volatile long end of the curve, with both the 10 year and 15 year yield curve trading 47bps and 53bps wider than in January.

While the country's debt is still trading much more tightly than in 2013 when investors took fright in the wake of the "taper tantrum" and political unrest, the looming election has clearly spooked some investors.

It's also worth noting that Turkey's lira denominated bond curve is also inverted; a sign of potential stress. 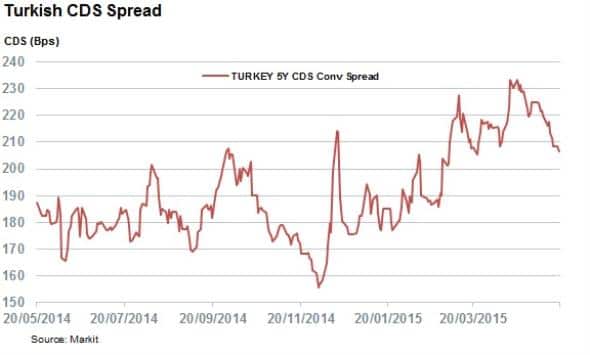 CDS spreads hit a 52 week high in April when they reached 233bps and have since come down slightly to 208bps.

Turkey's corporates are also feeling the strain of the falling lira, demonstrated by the fact that 40 of the 51 Turkish bonds in the Markit iBoxx USD Emerging Market Corporate index are now trading with a higher spread to Treasuries than at the start of the year.

At the beginning of 2015 investors were requiring 3.1% of extra yield to hold Turkish corporate debt. That number has since climbed to 3.3%.

One of the largest jumps in yield was registered by bank Akbank whose 2015 bond maturing in July has seen its spread rise by half to 3.3% in the last five months. The bank's CDS spread has also widened significantly and is now trading at 350bps, up from the 300bps mark at the start of the year.

Turkish banks, which make up 80% of the all the Turkish constituents of the iBoxx USD Emerging Market Corporate index have widened by a larger margin than the rest of the Turkish bond universe, with a 25bps widening.