China’s economy grew at its slowest rate in almost a quarter of a century last year, with growth losing momentum in the final quarter of the year.

A widespread expectation of growth slowing further in 2015 alongside an increasingly downbeat global outlook is likely to drive a further shift in investor sentiment away from China, as signalled by ETF flow data, which showed a record net outflow from funds exposed to the country in the fourth quarter.

Growth slows to weakest for 24 years 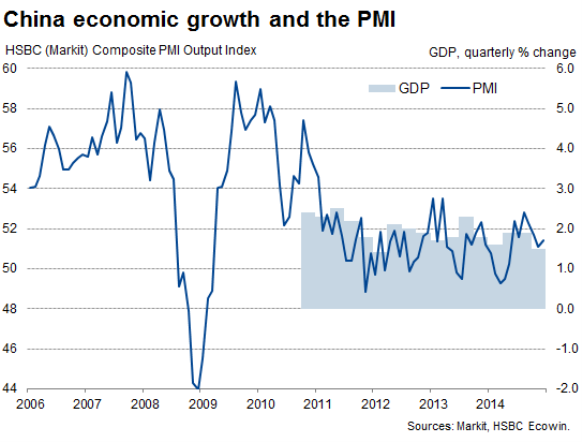 The softening pace of growth last year meant the government is considered to have undershot its growth target of “around 7.5%” for the year, though such a marginal miss seems overly critical.

The government is also keen to point out that 7.0% growth is equivalent to 10% growth prior to the financial crisis in terms of the amount of extra output produced, given the economy is so much larger now in absolute terms.

Moreover, there are also signs that the economy may have picked up pace slightly in December. Retail sales growth accelerated to a four-month high of 11.9%, up from 11.7% in November, though remains close to the ten-year low of 11.5% seen in October. The Markit-produced HSBC services PMI also suggests retail growth could gain some further momentum in coming months. 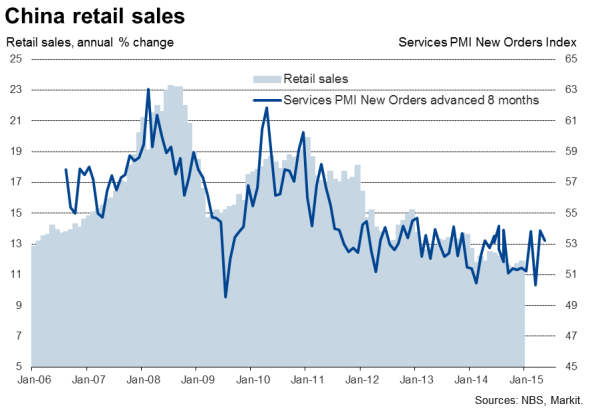 Industrial production growth likewise accelerated, up from a six-year low of 7.2% in November to a three-month high of 7.9%. However, the HSBC/Markit manufacturing PMI survey highlighted an underlying trend of persistent weakness in December, with the headline index dipping below the 50 no-change level for the first time in seven months and new orders falling for the first time since April. 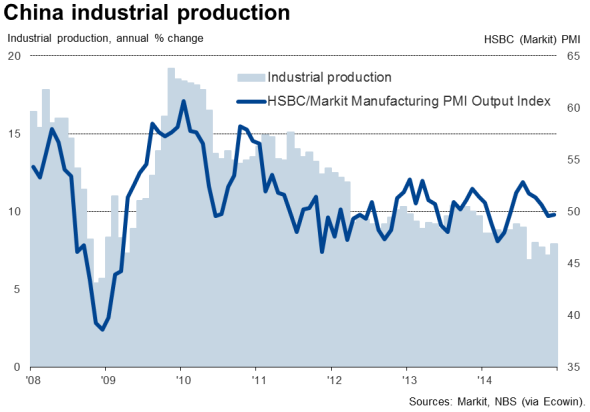 Subdued outlook in light of rebalancing

It’s also important to note that, although the economy slowed last year, growth has become more balanced, a consequence of Beijing prioritising reforms over the pace of growth. Such policies also mean that it is unlikely that growth will accelerate in 2015.

The ongoing process of rebalancing is expected to cause the government to set a lower growth target of 7.0% for 2015.

Soon after the GDP data were published, the IMF announced that it had lowered its 2015 growth forecast for China to 6.8% compared to 7.1% in its prior outlook. Anything lower looks unreasonable pessimistic. The government has already recently implemented more stimulus measures in an attempt to sustain growth around current levels. Interest rates were cut for the first time in two years in November, and infrastructure spending plans were brought forward.

The recent downturn in inflation, and the prospect of falling oil prices keeping inflation low in coming months (and certainly well below the central bank’s 3.5% target) also adds leeway for the authorities to add further stimulus to the economy if deemed necessary.

It’s likely, therefore, that Beijing will implement more modest stimulus measures, designed to keep the economy ticking along at a level which sustains current employment rates while it rebalances further towards domestic consumption and the property market continues to deflate.

Such a view of relatively weak economic expansion in the coming year is consistent with a shifting of investor sentiment away from China. Exchange traded funds exposed to China suffered a net outflow for a second successive year in 2014, contrasting with continuous growth over the prior five years.

The last four months of 2014 saw particularly strong net outflows, with the final quarter seeing a record net outflow. Data for January suggest the negative trend continued into the New Year. January has already seen net outflows of just over $2 billion, compared with just under $2.4 billion in both November and December.

Flash manufacturing PMI data, to be published on 23rd January, will provide the first insight into the economy’s performance at the start of the year. 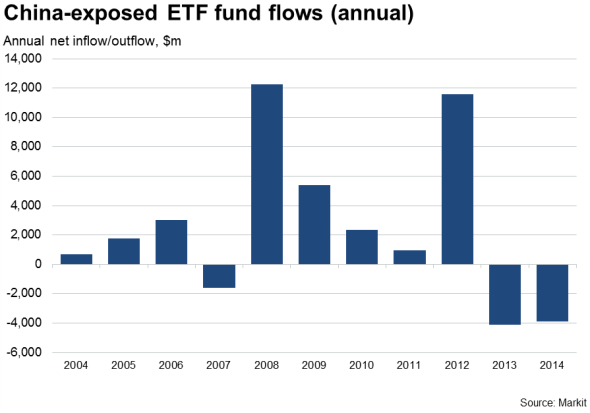 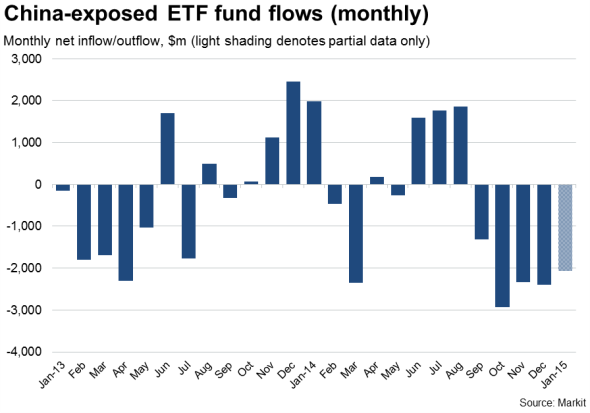