Over 540 ETFs launched during 2014. Trends in the listing regions, asset flows and exposure can now be revealed at the year-end.

2014 has proved another strong year for ETFs. The industry posted its best year in terms of inflows with over $290bn of inflows across the 6000 odd products; $35bn higher than the previous record seen in 2008. These strong inflows, along with asset growth have taken the aggregate AUM of the ETF industry to $2.72trillion, 14.7% more than at the end of last year. 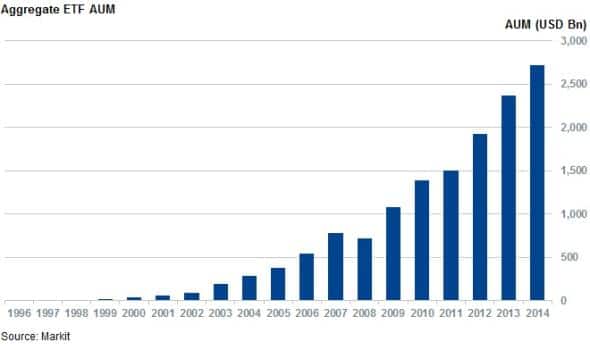 While the lion's share of new assets flowing into the industry went to existing flagship funds such as the SPY, whose AUM crossed the impressive $200bn mark in the closing weeks of the year, the ETF market has continued to expand, with over 540 newly launched funds over the last 12 months.

The 547 products launched over the last 12 months currently manage $23.04bn, which represents 1.1% of the total assets managed by the industry.

In terms of inflows, these funds have seen 8.3% of the $290bn that the industry managed to garner over the last 12 months.

Most of the assets managed by the class of 2014 are in equity funds which have $20.5bn of AUM. This is nearly four times that managed by fixed income funds, the runner up category. 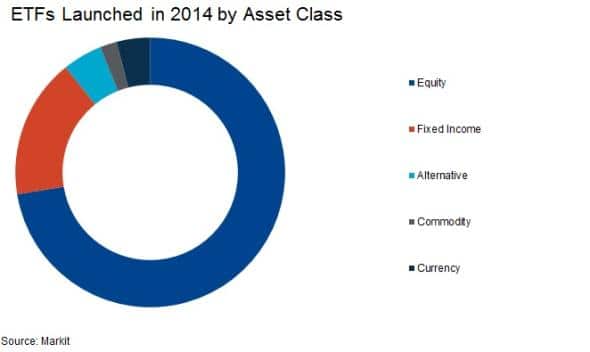 Eight of the ten current largest funds launched in 2014 are equity funds.

In terms of the most successful new product launch this year, the honour goes to the NEXT FUNDS JPX-Nikkei Index 400 ETF which has seen its AUM jump to $1.3bn since its launch in January. 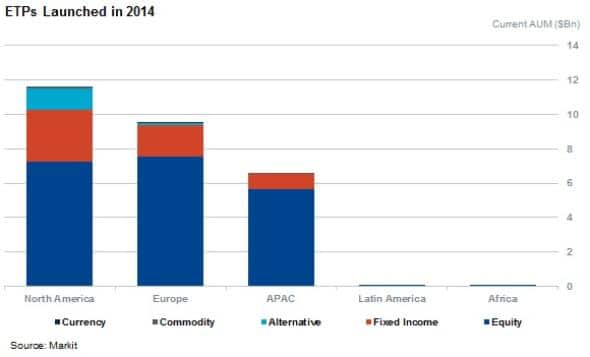 One trend worth noting is that $5.6bn of the newly listed funds in North America track overseas assets, just under half of AUM garnered by funds launched this year. This highlights the growing popularity of ETFs for investors looking to gain international exposure, and the fact that asset managers are actively adjusting their offering to suit this trend.

This also holds true conversely as $2.6bn of the $16bn managed by newly listed ETFs outside of North America target the region.

One area that the 2014 ETF vintage has been able to make the largest impression in has been in the alternative investment category. There have been 26 new launches of alternative products this year, which ended the year with $1.36bn of AUM. This represent 8% of the total assets managed by alternative ETFs; a much larger chunk than that managed by newly launched in the other asset class.

This trend was largely driven by WBI Investments which entered the ETF game this year with ten alternative ETFs which currently manage $1.1bn of AUM.