The economic upturn, and the buoyant labour market in particular, is feeding through to big improvements in government borrowing figures. Better than anticipated tax revenues could perhaps even pave the way for a less aggressive stance on spending cuts, sources of which are becoming increasing hard to identify.

Borrowing in May was the lowest for eight years, according to the Office for National Statistics, down to "10.13bn compared to "12.35bn last year. So far this tax year, borrowing in April and May is some "5.1bn lower than last year at "16.1bn, down almost a quarter. 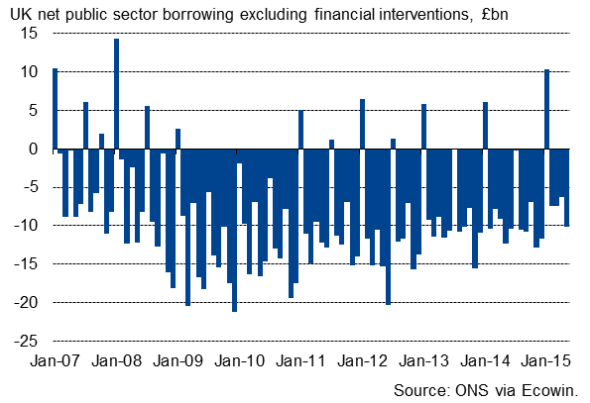 The latest improvement was fuelled by a surge in income tax receipts, revenues from which hit a four-year high for the month, up 5.3% on May of last year. Higher income tax receipts reflect both the rise in the number of people in employment as well as higher pay in recent months. Once national insurance is included, tax from employment hit a record high for May. 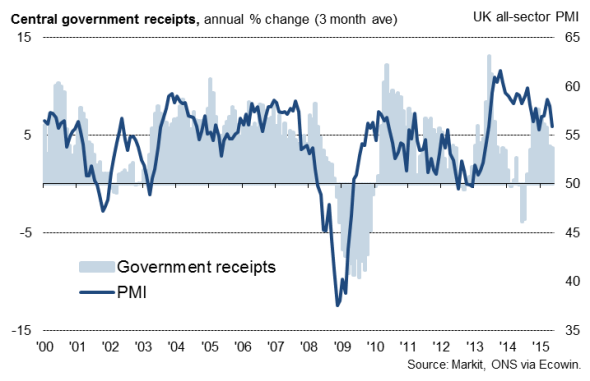 Perhaps we are at last seeing signs of a more 'normal' recovery, as in the past weak growth pay had led to lower than expected income tax receipts and a disappointing pace of deficit reduction. This year, with pay growth already having accelerated to 2.7% in the three months to April, we will hopefully see the economic recovery feeding through to much better income tax receipts alongside a rising corporation and VAT tax-takes. In the prior two tax years, government revenues had fallen far below levels that would normally be expected given the pace of economic growth (see chart).

However, this is not just about stronger economic growth bringing tax revenue gains. The deficit reduction is also being helped by lower government spending. Total tax receipts are 4.5% ("4.2bn) higher than last year in April and May combined, while government spending is 3.1% ("3.5bn) lower. 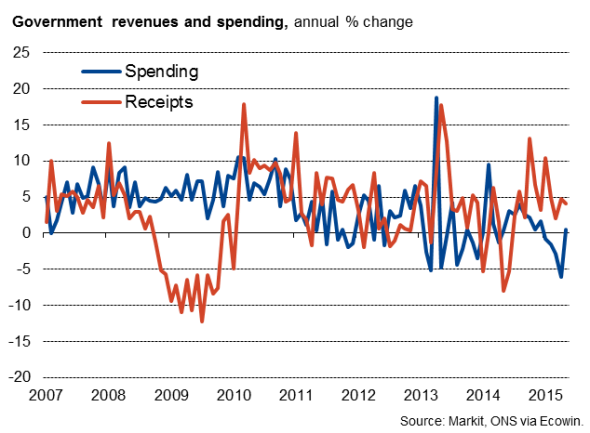 Deficit on course to beat target

Last year's deficit is now estimated to have stood at "89.2bn (4.9% of GDP). Clearly, the huge drop in spending for the first two months of the 2015-16 year puts the country on course to substantially undershoot this in the current year. A target of "75.3bn, as set out in the March Budget, should be achievable given the current state of play.

What will be interesting is to see if the better than anticipated tax revenues so far this year will mean the government can ease back on some of the austerity measures. The further cuts that have been pencilled in for departmental budget are looking increasingly difficult to achieve, given the scale of the reductions that have already taken place.