The past year has been a testing time for the European hybrid corporate bond* market. New issuance has stalled and bond spreads have widened as market volatility has put investors in a risk-off mode. Even as the market outlook has brightened over the past couple of months, hybrids have continued to underperform their senior European corporate counterparts.

Hybrid on the rails 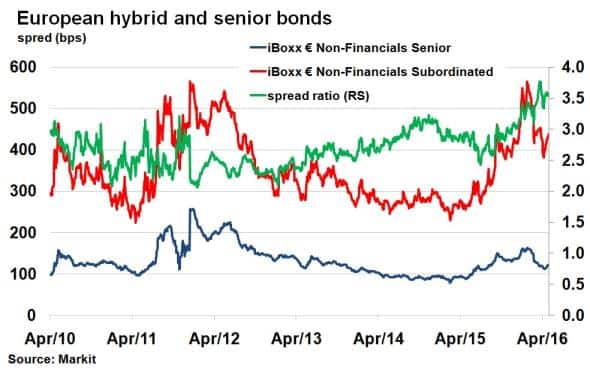 This underperformance marks a contrast to the start of 2015, when hybrids saw a resurgence in issuance as major European corporations exploited low interest rates. Risk in the sector tumbled, with the Markit iBoxx " Non-Financials Subordinated index seeing its spread (interest premium over German bunds) fall to 236bps as of last March. Since then, spreads have widened significantly, hitting 565bps in mid-February; the same level seen during the heights of the European sovereign debt crisis in 2011. Spreads have since come down to 437bps as of May 17th.

The spread ratio of the Markit iBoxx " Non-Financials Subordinated index and the iBoxx " Non-Financials Subordinated index has risen sharply since mid-last year, highlighting the underperformance of the hybrid market on a spread basis in comparison to senior corporate bond counterparts. The spread ratio is currently 3.55, a near six year high, from as low as 2.49 last July. Interestingly, even as market volatility has subdued and issuance in the senior European bond market has picked up over the past two months, the spread ratio has continued to remain at elevated levels.

A closer look at the hybrid issuers presents a clearer picture, with idiosyncratic risks one of the main drivers of underperformance over the past year.

Over 14% of the Markit iBoxx " Non-Financials Subordinated index is composed of hybrid bonds issued by Volkswagen, the largest issuer in the index by weight. The German car maker saw its bond spreads flare up on the back of an emissions scandal last September, as the company faced drawn out litigation charges and reputational damage. French oil group Total, the next largest issuer of hybrids by weight, has struggled to deal with deteriorating oil and gas prices over the past year, forcing the company to restructure parts of its business. Its hybrid bonds currently trade at just under 400bps over German bunds. 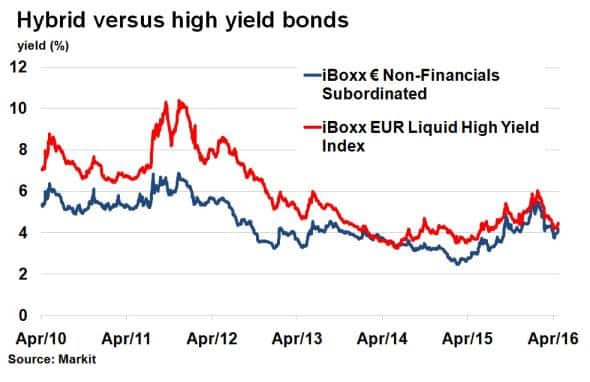 *Hybrid corporate bonds are usually fixed coupon, perpetual in nature, and with pre-determined call dates. They are essentially an equal mix of debt and equity and rank ahead of common equity in the event of a default, but are subordinated to senior debt. From an issuer stand point, they provide extra capital protection due to their half equity structure while still maintaining debt status under tax rules.