Recent PMI data suggest the Greek manufacturing sector may finally be on a path to recovery, with solid expansions evident in output, new orders and employment aiding a wider economic upturn. Meanwhile, the latest outlook data point to a revival in business confidence. Structural issues remain, however, and provide a caveat to the latest upturn.

The Greek manufacturing sector enjoyed a positive second half of 2017. At 53.1, the December headline Manufacturing PMI registered a near-decade high and indicated a seventh successive monthly improvement in operating conditions, which is by far the longest period of growth recorded by the PMI in the post-global financial crisis era.

The improved situation is also slowly being seen in official data, with a third successive round of quarterly GDP growth recorded in Q3 2017 – the first time this has been the case since 2006. Given the solid performance of the PMI, a further encouraging GDP reading looks likely for the fourth quarter. 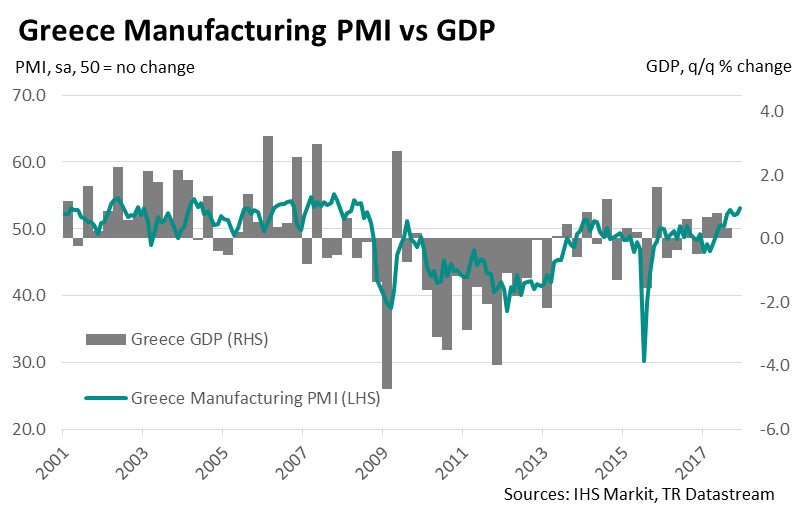 Overall growth has been underpinned by rising client demand, with the PMI survey’s new orders index hitting a near ten-year high of 55.0 in December. A strong tourist footfall has featured among the reasons given by panellists reporting an increase in demand for goods in recent months.

With tourist arrivals hitting record highs in 2017, the Greek economy appears to be benefiting from terrorist-related instability in other popular tourist resorts around the Mediterranean. Maintaining this momentum when stability returns to these competitors will be a key challenge going forward.

Greek manufacturers have also experienced an upswing in new export orders, buoyed by a cyclical upturn in global demand. Indeed, growth of foreign demand for Greek goods was the sharpest recorded by the PMI for almost ten years in December, despite the euro’s recent rally against the US dollar. 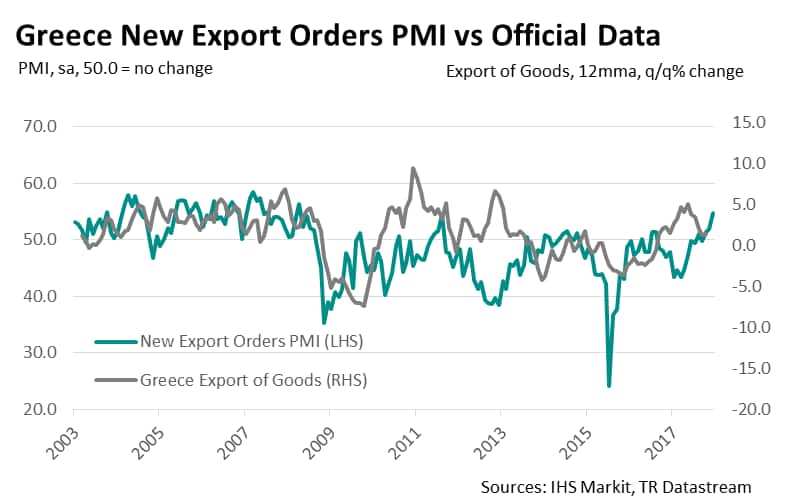 Higher client demand has meanwhile encouraged Greek firms to take on additional workers. Indeed, the rates of manufacturing employment growth signalled by the PMI in the second half of 2017 have been among the sharpest in the survey’s 18-and-a-half year history.

A turnaround in the job market (or more precisely, a slackening in the pace of job losses) signalled by the PMI can be traced back to 2013, which was swiftly followed by a steady fall in the official unemployment rate from 27.9% in July 2013 to 20.7% in October 2017. Job creation has been supported by labour market reforms, including a reduction in the minimum wage and suspension of automatic salary increases over this period. 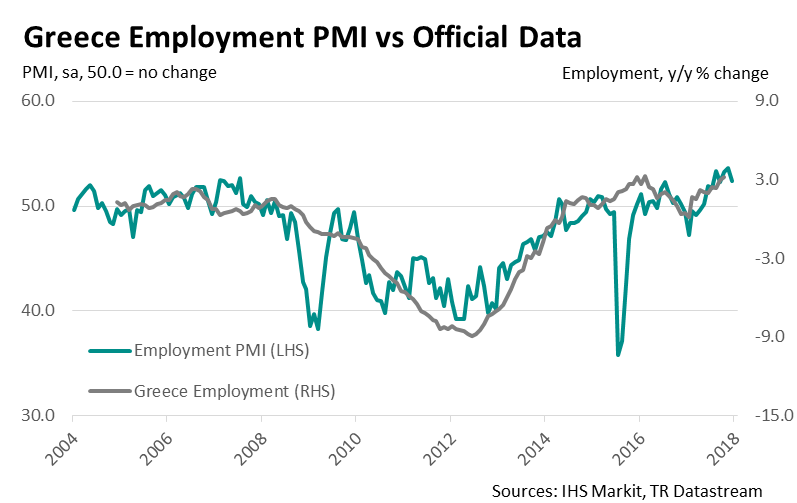 The nascent recovery in output and employment has contributed to a rise in business confidence in recent months. The degree of optimism about the year ahead registered in the PMI survey hit a record-high (since July 2012) in December. Improved sentiment will buoy hopes of increased investment spending which, above all else, is likely to be a key ingredient of a sustained recovery.

The latest PMI outlook report provides further encouragement on this front. The winter 2017 poll showed the net balance of firms planning to raise capital expenditure over the coming 12 months hit its second-highest level since the global financial crisis. 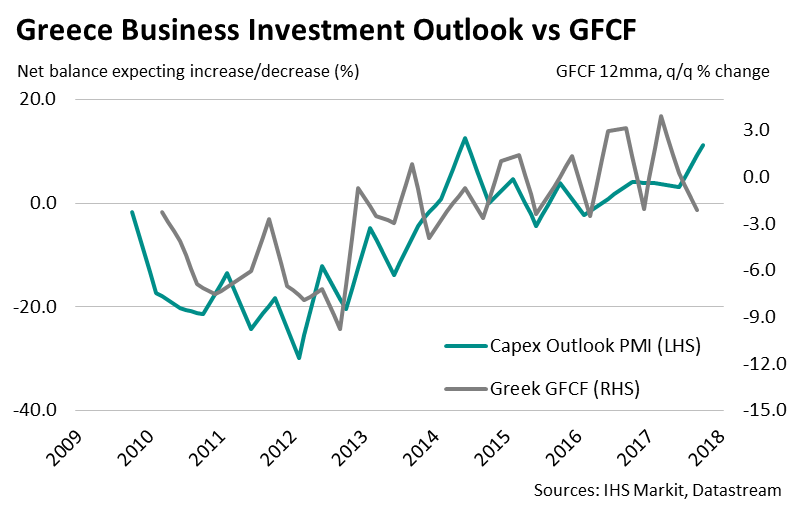 Recent PMI data therefore paint a rosy picture of the Greek manufacturing sector and have resurrected hopes that the economy is finally on a path to recovery. The country’s successful return to bond markets last July and the removal of short-term default risk amidst the latest bailout agreement support this narrative.

Issues relating to Greek debt (180% of GDP in 2016) remain unchanged, however, and cloud the economy’s mid-to-long term future. Austerity measures, including high tax rates and pensions cuts, continue to stifle domestic demand, while an overleveraged banking sector has put a ceiling on investment spending. Meanwhile in the political sphere, social instability remains ever-present and poses stability risks going forward. Indeed, these factors were among the most cited threats to growth in 2018 in the most recent business outlook report.

The next PMI data (for January) are released on 1st February.

Factors cited as threats to business growth in 2018 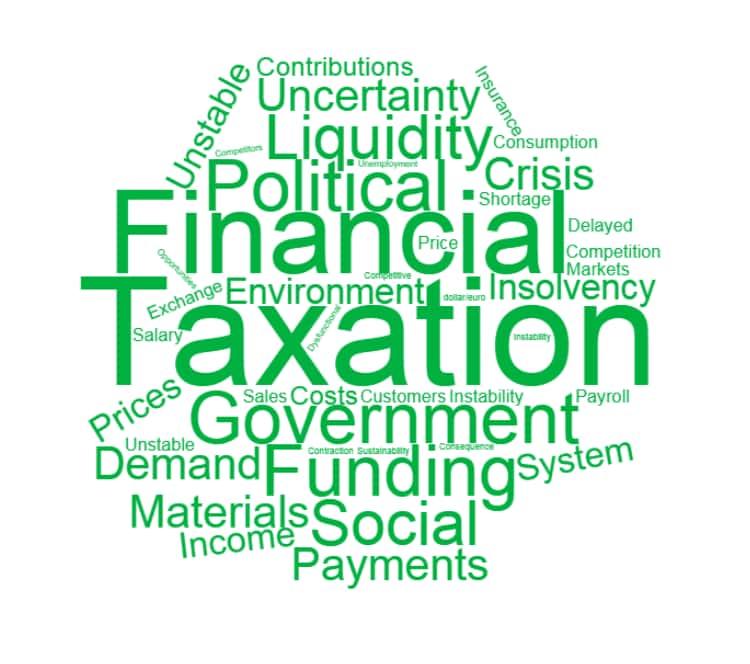