After gorging on European assets in the opening months of the year, US investors seem to have changed their minds about their European exposure, prompting US listed European exposed ETFs to see sustained outflows.

In a reversal to what had been one of the most interesting investment stories of the year so far, US investors have been actively trimming their exposure to European exposed funds after gorging on the asset class in the opening six months of the year. The possible causes for this capital flight may range from the fact that Europe stands to lose more from further Russian sanctions, anaemic European growth and the strengthening dollar,. The only certainty is that a growing portion of American investors think that their assets are better invested outside of Europe, something which wasn't the case six weeks ago.

In a reversal to the first six months of the year which saw US listed European ETFs gather just under $20bn of new assets, the last six weeks have seen $3.97bn of redemption across the 86 products which give US investors the most direct route to European exposure. The trend started as a trickle in the opening weeks of July and only gathered momentum in the first week of August when over $1.4bn of assets flew out of funds exposed to the region. This large outflow marked the largest single week in terms of absolute fund flow in over six months. 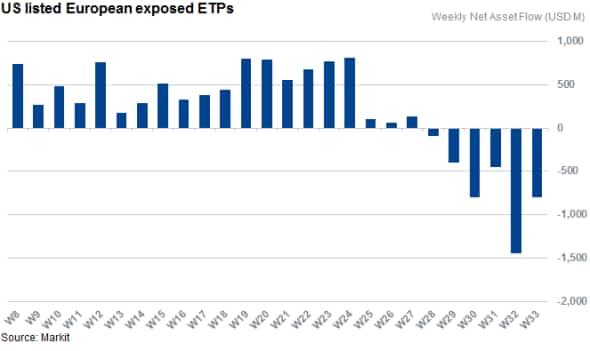 The largest funds have led the outflows, with the iShares MSCI EMU fund experiencing the largest outflows with over $1.2bn of redemptions over the last six weeks.

The Vanguard FTSE Europe ETF has also seen strong outflows, with net withdraws of $453m over the last three months.

The recent rout in European funds has been led by core European countries, as funds that track German, Swedish and French assets have seen the largest outflows over the last three months. 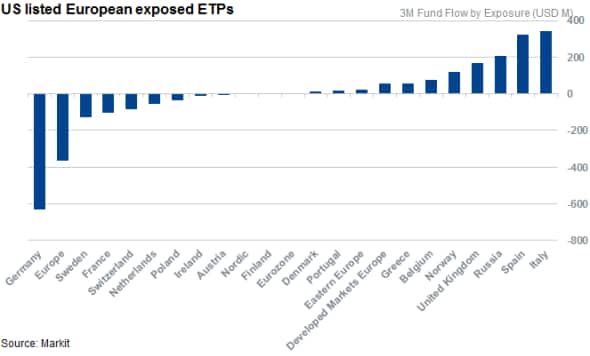 Funds that track France and Sweden saw over $100m of outflows over the last three months.

Further south, both Italy and Spain have continued to appeal to US investors as both countries have managed to continue to grow their assets as their core country peers experience withdrawals

Domestic demand picks up the slack

While US funds have seen outflows, domestic investors look to have picked up some of the slack over the last few weeks as the 960 plus domestically listed ETPs with European exposure have continued to grow their asset base over summer. The $4.5bn of net inflows gathered by these funds takes the six month aggregate inflow to just shy of the $18bn mark. 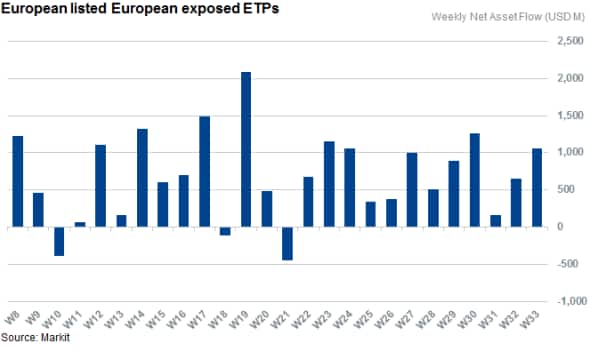