US retail sales fell for a second successive month in June, missing expectations and sending the dollar lower. However, the sales weakness had been flagged in advance by IHS Markit's PMI data. Meanwhile, manufacturing output growth also remained sluggish, confirming earlier PMI signals of industrial malaise compared with earlier in the year.

The June sales and output data are the latest in a flow of disappointing official data which are now coming more into line with relatively subdued PMI survey numbers, which since April have seen indicating that economic growth may fail to rebound to any substantial degree in the second quarter.

Economists polled by Reuters had been expecting total retail sales to grow 0.1% in June, with core sales up a stronger 0.3%. However, the actual numbers came in lower, with headline sales down 0.2%, falling for a second month running. Core sales dropped 0.1% after a flat May.

The data follow the release of IHS Markit's PMI survey data, which had shown growth of new orders for consumer goods at US manufacturers trending sharply lower in June. Having peaked at a strong 59.5 in January, the PMI consumer goods news orders index has been on a steady downward trend so far this year, slipping to 52.0 in June, its lowest for just over one-and-a-half years. The three-month trend in the PMI series - which correlates closely with the three-month change in the retail sales data - fell to its lowest since January 2016. 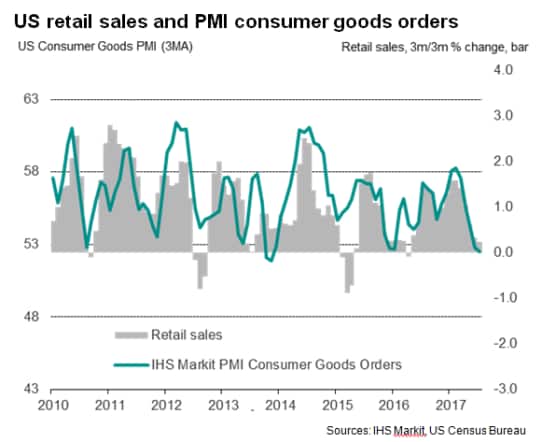 By comparison, the June drop in the retail sales numbers takes the official three-month growth rate to just 0.2%, its weakest since March of last year and the second-weakest in over two years. The 0.2% rise in thethree months to June also represents a disappointing increase after the 1.0% gain seen in the first quarter.

Some encouragement can be gleaned from the fact that, despite the 0.1% drop in core sales in June, spending in this control group of purchases, which excludes volatile elements such as building materials, autos and food, remained some 1.0% higher in the second quarter, which bodes well for the wider measure of consumer spending, and therefore GDP.

However, the failure of headline and core sales to improve in June after a lacklustre May adds to warning notes on the health of the US economy in the second quarter after disappointing manufacturing output numbers. Manufacturing production rose a meagre 0.2% in June after falling 0.4% in May. Over the second quarter as a whole, output was just 0.3% higher, suggesting manufacturing growth has eased markedly since earlier in the year.

These weaker official data go some way to corroborate the recent sluggish PMI survey numbers, which since April have been suggesting that expectations of a significant rebound in GDP during the second quarter could prove over-optimistic. 🇬🇧 Weakness in the UK Construction sector persisted in May, with #PMI Total Activity Index at 28.9 (up from 8.2 in… https://t.co/G3vuS60yRP

Eurozone Construction #PMI signals activity falling further in May (39.5), but at much slower rate than April. Germ… https://t.co/fI3WReCHw1

The latest release of the IHS Markit US Services PMI showed another decline in private sector business activity dur… https://t.co/ZXccUDN2Qa