The week sees the UK Chancellor of the Exchequer Philip Hammond deliver his first Autumn Statement before the House of Commons. Meanwhile, flash PMI results will provide analysts with more information on global economic trends in the fourth quarter, while the Fed will be monitoring US durable goods orders and consumer sentiment data in the lead up to its December meeting.

Philip Hammond will give an update on the state of the UK economy and outline his plans for taxes and spending when he delivers his first Autumn Statement on Wednesday. It is expected that an increase in borrowing will be announced. Not only has Mr Hammond already signalled that the government has ruled out predecessor George Osborne's plans to balance the books by 2020, but slower economic growth looks set to add to borrowing requirements.

UK GDP and the PMI 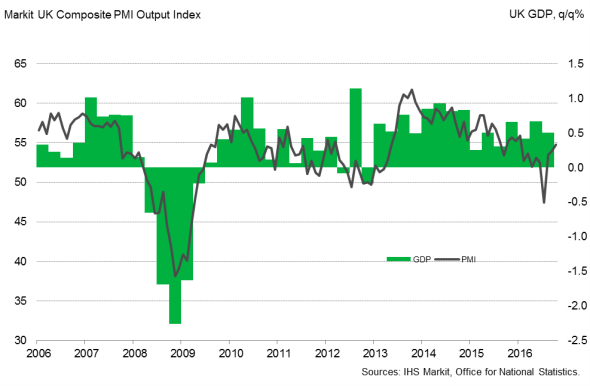 The UK also sees its second estimate of third quarter GDP, after the initial publication showed the economy expanding by 0.5%. IHS Markit currently expects GDP growth to slow from 2.1% in 2016 to 1.2% in 2017.

Over in the US, the Federal Reserve will continue to monitor financial markets and the economic data flow in the lead-up to its next meeting on December 14th. Despite some market volatility following the surprise outcome of the US presidential election, market expectations of a rate hike in December currently stand at over 75%. Moreover, in her latest assessment of the health of the US economy, Fed chair Janet Yellen has indicated that the interest rates could be raised "relatively soon". The release of flash PMI results, durable goods orders and consumer sentiment data is therefore likely to add to the policy debate.

Official data highlighted that consumers continued to spend in October, with retail sales up 0.8% while latest consumer sentiment data from the University of Michigan pointed to an improved mood among shoppers. Updated results are out on Wednesday. 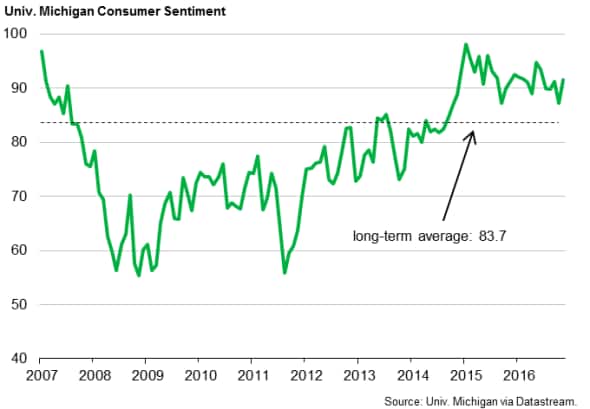 Business survey results for the US have been fairly mixed this year so far, with the PMI dropping to a 28-month low in February but picking up again in more recent months. October's reading was the highest in nearly a year and suggests that the US economy was in reasonably good shape at the start of the fourth quarter. The first information on the health of the world's largest economy in the immediate aftermath of the election will be provided by flash manufacturing and service sector PMI results.

Flash PMI results are also out in the eurozone. The trend this year so far has been one of steady but unspectacular growth. Despite the PMI reaching a nine-month high in October, the growth rate signalled remains a moderate 0.3%. November numbers are issued on Wednesday. IHS Markit currently forecasts growth of 1.8% for 2016 as a whole.

There will also be a particular focus on Germany, where Ifo business climate, GfK consumer sentiment and detailed third quarter GDP results are issued. An initial estimate showed GDP increased just 0.2%, with the economy relying on the domestic market, while net trade sent some negative signals.

Japan's economy sprang back into life in the third quarter, with GDP expanding 0.5% following a 0.2% increase in the second quarter. With October's business survey results indicating the strongest rate of economic growth for nine months, hopes are growing that the economy has gained further momentum in the fourth quarter. Flash manufacturing results (released on Thursday) will therefore be carefully assessed by analysts and policymakers.

Trade data for October are published in Japan.

GDP results are out in Nigeria.

South Africa sees the publication of unemployment figures, while the Central Bank of Nigeria announces its latest interest rate decision.

Consumer confidence data are issued in the eurozone.

Public sector net borrowing and CBI industrial orders data are out in the UK.

Existing home sales data are published in the US.

Flash PMI results are issued in France, Germany, the eurozone and the US.

Monthly GDP numbers are out in Russia, while inflation figures are published in South Africa.

Flash manufacturing PMI results are out in Japan.

Trade balance and wage inflation data are issued in Italy.

Updated third quarter GDP results are out in Spain.

In the UK, BBA mortgage data are released.

Consumer price figures are out in Japan.

In Germany, retail sales figures are released, while France sees the publication of consumer confidence numbers.

Industrial and retail sales orders data are issued in Italy.

The second estimate of third quarter UK GDP is released by the Office for National Statistics.

Flash Services PMI results and trade numbers are issued in the US.