Financial institutions across Europe have flocked to Contingent Convertibles (CoCos) in order to shore up their balance sheets. The rise of this new hybrid equity/debt instrument could also drive increased securities lending demand as market participants hedge their exposure to their bond instruments being converted to equity.

For a copy of the white paper on the new Markit iBoxx Contingent Convertible index family please email press@markit.com

Procyclicality in the banking system has been one of the key issues which Basel III set out to address in the wake of the capital crisis. The flight to safety among investors saw bank funding evaporate at the very moment when it was most needed. This in turn prompted a string of government bailouts of institutions deemed "too big to fail".

One of the main steps outlined under Basel III were lower equity leverage ratios to ensure that banks have adequate capital to cover losses in the event of a downturn, without having to turn to capital markets. Banks have been actively trying to meet these targets over the last few years by shedding their riskier assets and raising capital. The latter has been achieved through a mix of rights issues and the issuing of CoCos; hybrid bond/equity instruments which offer bond-like returns, but convert to equity or write down in the wake of a predetermined capital event.

This pragmatic asset class allows banks to tap bond investors to meet their capital requirements without the need to dilute their existing shareholder base (except in the event of a capital call).

The value of outstanding CoCo issuances has increased significantly in the 20 months since Basel III's initial rollout. The current notional amount of global CoCo securities tracked by the newly launched iBoxx Contingent Convertible Index Family now stands at $79bn as of the end of September, which is nearly four times the amount seen at the start of the year. 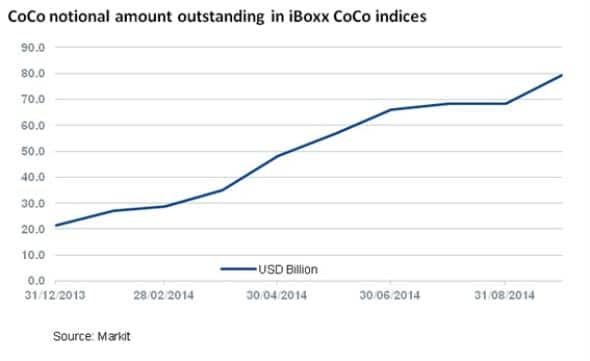 CoCo issuance has been driven by large European financial institutions, with an average market cap across the 21 issuing firms of $40bn. On aggregate, these firms have issued CoCos worth 7% of their current market cap.

From an investor point of view, CoCos offer relatively more yield than high yield debt, even though their issuers have a higher average credit rating. The USD segment of the iBoxx Contingent Convertibles Developed Market index currently yields 6.88% annually, whereas the Markit iBoxx $ Liquid High Yield index yields 90bps less. This lower yield comes despite the fact that the index has an average ratting of B as opposed to BB in the Contingent Convertible universe. 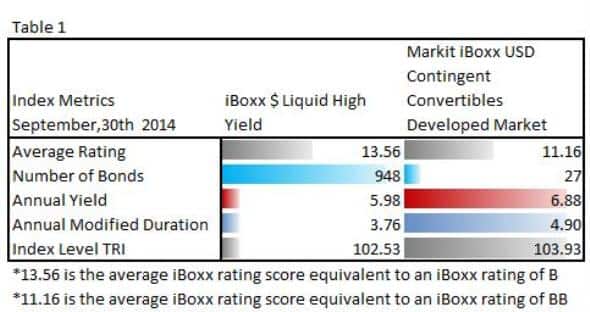 It is worth noting that much of the additional yield could be attributable to the fact that CoCos can see banks withhold their interest payments at any point without incurring the risk of default, which is something that investors want to be compensated for.

The hybrid nature of CoCos opens the door for investors to hedge their equity exposure in the event of a CoCo conversion. As CoCos are similar to writing a put, the hedge would be to sell the reference equity short ahead of an impending conversion.

This is not prevalent among the current crop of CoCo issuing firms, as none of them see any significant demand to borrow in the securities lending market. The most shorted CoCo issuer is Credit Suisse, which sees 1.5% of its shares out on loan, a number that is considerably below the market average.

Lloyds Banking group, for example, did not see any change in its demand to borrow despite issuing over $8.6bn of CoCos at the start of April. This represents roughly a tenth of the company's current market cap and any significant hedging activity would have lifted the proportion of Lloyds shares out on loan above the 0.5% which it has seen over the last 18 months. 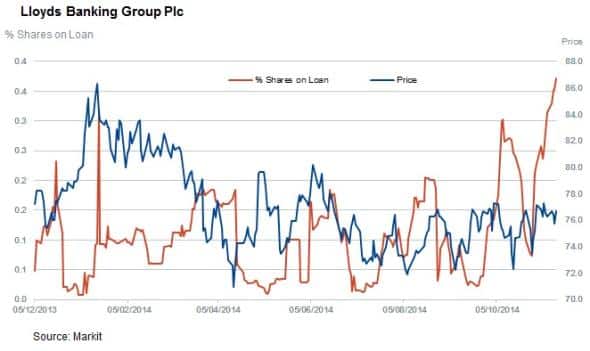 While there is little hedging going on, this could be driven by the fact that many CoCo issuers are at the high quality end of the ratings scale

In a recent interview with Finextra, our own Mark Findlay and Abhay Pradhan discuss how migrating capital markets a… https://t.co/cGLx3f9ZX2

Join us for an informative two days of interactive breakout sessions as we highlight next-gen, cutting-edge technol… https://t.co/pbcmkwBdly