The Markit Eurozone PMI" has been compiled by Markit's economics team since 1998 and has built a track record of accurately anticipating official data relating to economic growth, employment and inflation. The survey-based data, derived from Markit's carefully-structured panel of around 5,000 manufacturing and services companies, offers investors, policymakers, business planners and other economy watchers with the most up-to-date guide to economic trends available.

One of the most commonly asked questions we receive is how to use the PMI to predict economic growth, to which we provide users with a simple but effective tool. More complex 'nowcasting' models can of course be developed using the PMI as one of many principal components, but few offer significantly greater accuracy than this straightforward and basic model.

In summary, a PMI of 50 indicates no change in GDP on the previous quarter, and each index point above or below 50 adds or subtracts 0.1% from the quarterly growth rate. The following explains the methodology in more detail. 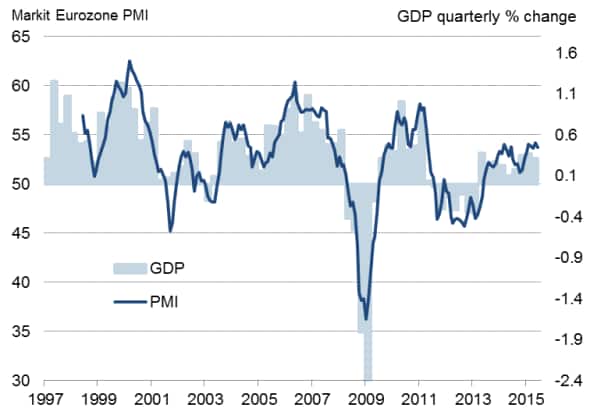 In the first instance, it should be noted that the PMI we use in this analysis covers manufacturing and services but excludes sectors such as retail, construction and government. Other PMI data are available for retail and construction which can be added to produce more sophisticated models, but in this instance our intention is to provide users with a guide to how to interpret the headline Markit Eurozone Composite PMI and accompanying 'flash' release.

The PMI data are especially valuable as they are available well in advance of official data, the latter being available only on a quarterly basis and published with a delay of around six weeks after the end of each quarter. Even these initial first estimates are also subject to revision.

Even earlier PMI-based estimates can be derived by using the PMI data for just the first two months of each quarter, providing a reliable steer on GDP growth some 10 weeks in advance of official data publication .

Comparing the PMI against GDP shows that the highest correlation (83%) is achieved with the PMI acting as a coincident indicator of GDP (i.e. no leads or lags applied). The correlation improves to 85% if we use an average of the PMI for each calendar quarter.

Having established the optimal timing advantage of the PMI, an important next step is to derive implied GDP growth rates from the PMI - a diffusion index which varies around the neutral level of 50 (50 being the level at which the number of positive survey responses equals the number of negative responses).

Simple OLS regression analysis is used whereby the quarterly rate of change of GDP is explained by the sole variable of the PMI.

This regression yields a robust adjusted r-square of 0.725, and allows us to estimate GDP using the following formula:

A PMI of 50.0 is therefore indicative of GDP being unchanged on the previous quarter. Each index point adds or subtracts 0.12% from the quarterly growth rate.

As a 'ready reckoner', the following guidance can be used: 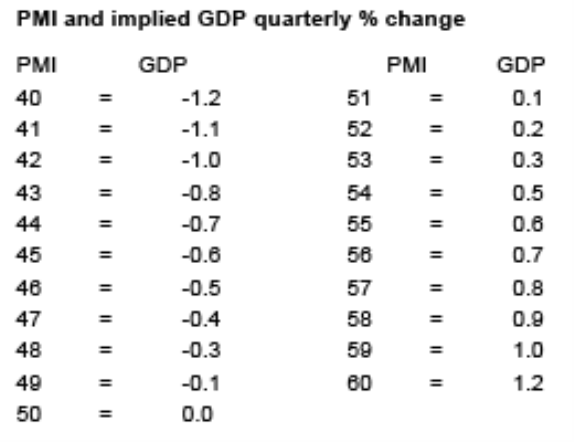 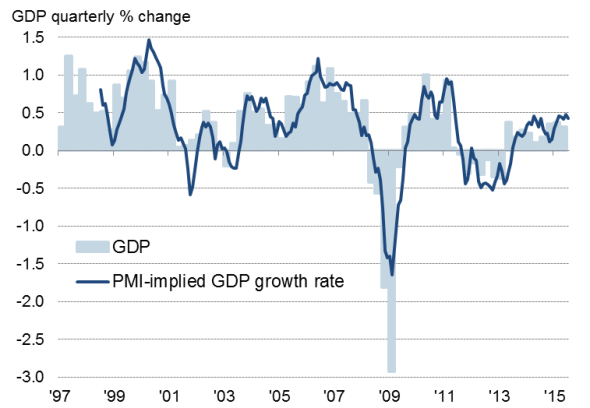 The above analysis can be repeated by using just the first two months' PMI readings for each quarter, as these averages are often almost identical to the average for the full quarter (see chart - they exhibit a correlation of 99%).

In fact, the implied GDP growth rate derived from using the PMI for just the first two months of the quarter has never diverged from the growth rate indicated by the full quarter PMI average by more than +/-0.1%.

This means that the above regression analysis and accompanying 'ready reckoner' presented here can be used to estimate GDP with reasonable accuracy by using just the first two months PMI data for each quarter, greatly enhancing the value of the PMI by taking advantage of the monthly publication of the survey data compared to the quarterly issuance of GDP numbers.

Limiting PMI data to first two months of the quarter 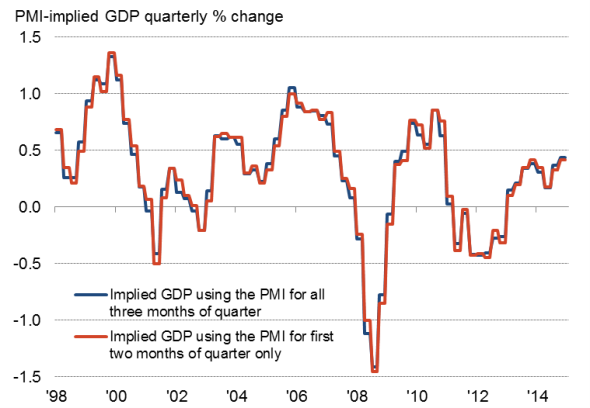 Please visit the research section of www.markit.com/commentary/economics for PMI-based GDP 'nowcasts' for other countries.