There's a big focus on monetary policy during the week, with central banks in the US and Japan announcing their latest interest rate decisions. Meanwhile, flash PMI results will provide data watchers and analysts with more important information on global economic trends in the third quarter.

All eyes will turn to Washington D.C. on Wednesday, when the Federal Reserve announces its latest monetary policy decision. There have been mixed signals about the future path of interest rates in recent weeks and it seems there's a lack of consensus at the Fed.

US GDP and the PMI 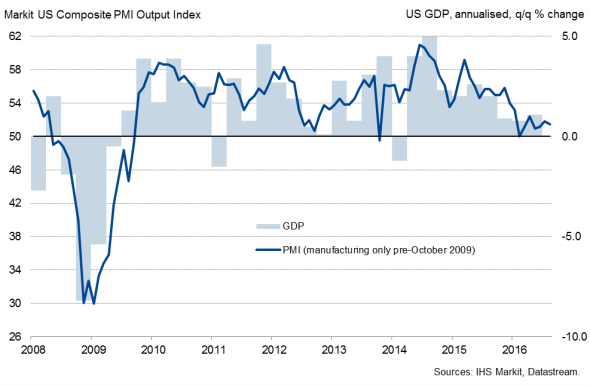 On the one hand, Chair Janet Yellen in August said that the case for raising rates "has strengthened in recent months". With the jobless rate at just 4.9% and expected moderate economic growth, there would be some arguments for tightening monetary policy.

However, other Fed officials argue that the strong labour market is failing to boost wages and generate inflation as much as expected. Some are also unconvinced of the robustness of growth, with latest PMI data from IHS Markit pointing to only lacklustre third quarter growth.

Futures markets signal only a 12% likelihood of the Fed raising rates in September, with a 51% probability of a move by December. Two days after the Fed meeting, IHS Markit publishes flash PMI results for the US manufacturing sector in September.

Over in Japan, policymakers will meet on Wednesday and there is a strong possibility that Bank of Japan boss Haruhiko Kuroda will announce more stimulus. Prices in Japan continued to slide in July, with CPI remaining well below the bank's 2% target and Mr Kuroda stating that "it is often argued that there is a limit to monetary easing but I do not share such a view". Moreover, second quarter GDP growth came in below expectations and latest PMI results highlight that the country's economy continued to struggle in the third quarter. Two days after the Bank of Japan announcement, latest flash manufacturing PMI results are published by Nikkei.

ECB policymakers will meanwhile scrutinise latest flash PMI results and consumer confidence numbers for more information on the health of the eurozone economy in the third quarter.

Euro area GDP grew 0.3% in the second quarter, following a 0.5% rise in the opening three months of the year. However, there are some downside risks to the growth outlook. Official data showed the largest annual decline in industrial production since 2014 and the Markit Eurozone PMI fell to a 19-month low in August. September PMI data are updated on Thursday. Policymakers will hope to see an improvement in consumer confidence after the European Commission's measure fell to -8.5 in August. Further weak data points in coming weeks could strengthen the case for the ECB to loosen monetary policy further.

Eurozone GDP and the PMI 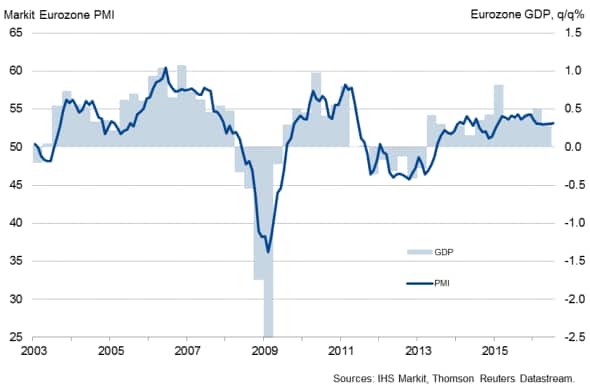 Retail sales, unemployment and wage data are published in Russia.

Jobs data and the latest IBC Economic Activity Index are issued in Brazil.

In the US, the latest NAHB Housing Market Index is published.

In Russia, monthly GDP numbers are out.

Housing starts and building permit figures are meanwhile issued in the US.

Wholesale trade numbers are out in Canada.

Consumer confidence numbers are out in the euro area, while France sees the release of business sentiment data.

CBI industrial orders figures are issued in the UK.

In the US, initial jobless claims and existing home sales numbers and the Chicago Fed National Activity Index are published.

Flash PMI results are published in Japan, France, Germany, the eurozone and the US.