Greece mood buoyant ahead of vote

Investor sentiment towards Greek government bonds has improved significantly since the mid-summer lows, a trend that has held heading into this Sunday's election.

Greek voters will head to the polls for the third time this year on Sunday after Prime Minister Tsipras's August 20th call for early elections. Unlike previous elections, which offered real potential setbacks for Greek bond investors, the upcoming plebiscite looks set to see either incumbent Syriza or the centre right New Democracy party gain the largest share of votes. Both parties are on record as being in agreement with the current bailout terms. The newly formed Popular Unity party, made up of former breakaway Syriza MPs, is polling at only 5% with its anti-austerity platform.

This perceived consensus that the country will continue on the path set out by the latest bailout has assuaged investor sentiment towards Greek government bonds, which has in turn assured that the asset class vastly outperformed the rest of the European government bond universe.

5 year Greek CDS spreads are currently trading around 36% upfront, representing the lowest level since Syriza came into power in January. Not surprisingly, investor views of the risk of Greece's default have nearly halved in the last three months, when the upfront spread stood wider than 60%. 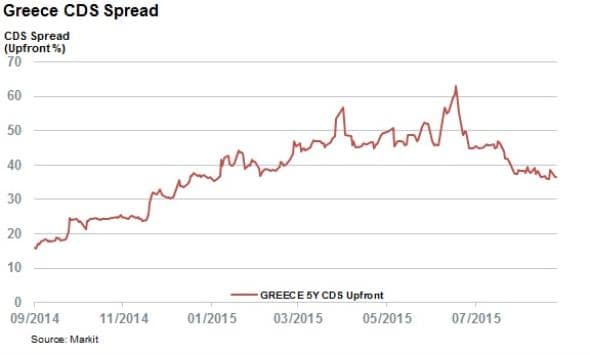 Investor sentiment has not changed materially in the run-up to the election although the spread has tightened by 0.9% since the election was announced. This tightening contrasts with the 6.7% rise in the upfront spread in the three weeks leading up to this summer's crucial bailout referendum, which arguably marked the high watermark for the country's austerity movements.

This turnaround in Greece's risk perception has been mirrored in the way its bonds trade as the 22 Greek sovereign bonds priced by Markit's evaluated bond service have seen their yield halve on average from the levels seen on July 8th, in the depths of the crisis.

The widest swings was seen by the short dated 3.375% note due in 2017, which yielded as much as 57% at its lows. Tsipras's volte face on the bailout stance has seen that bond's yield fall by four-fifths in the last three months to as low as 10% last Thursday. The latest yield is half of what investors required when the bond was issued in April. 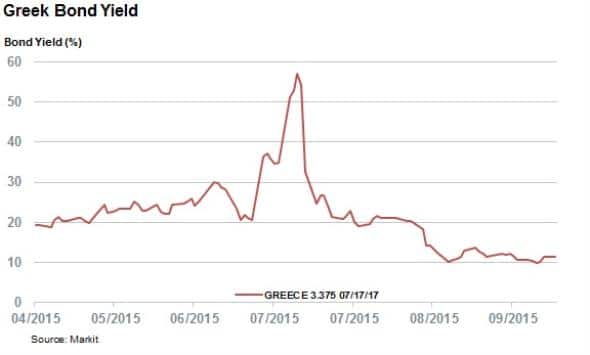 On a blended basis, the Markit iBoxx € Greece index, which is made up of the previously mentioned 22 bond issuance, has seen its yield fall from 17.5% to 8.4% as of latest count, its lowest yield of the year so far.

This tightening across the board has in turn translated into real returns for investors as the Markit iBoxx € Greece has delivered total returns of 4.5% so far this month, broadly beating the 0.4% delivered by the iBoxx € Sovereigns High Yield index, which tracks the Eurozone's less creditworthy sovereign borrowers. 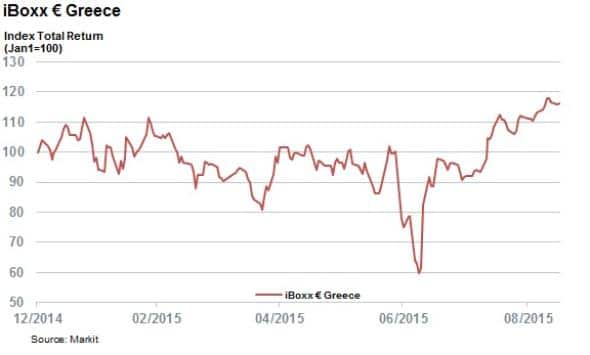 September's market beating returns has pushed the year to date total returns of the index to 16%. While it has not been an easy ride for investors, as seen by the fact that the index was down by over 40% during the worst of the bailout impasse, the lack of support for anti-austerity parties in the lead-up to Sunday's election has turned the region's pariah into the best performing segment of the Eurozone sovereign bond market.