Rhetoric between the leaders of North Korea and the United States reached a new level of intensity last week, but South Korean investors, who stand on the front line of escalating tensions, have by and large remained calm.

South Korea's CDS spread did widen over the last few weeks - the latest escalation from its northern neighbor raised this gauge of South Korean credit risk to an 18 month high - but the surge was relatively short lived. 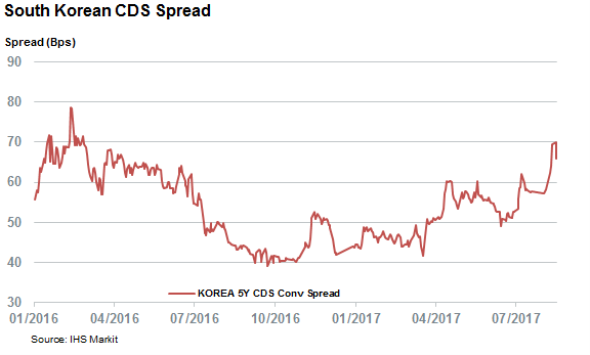 South Korean equities were hit with collateral damage from the war of words between North Korea and the US. The largest foreign-listed South Korean ETF, the iShares MSCI South Korea Capped ETF (EWY), lost half of its year-to-date performance against its globally invested peer, the Vanguard Total World Stock ETF (VT). This latest setback still puts South Korean equities way ahead of the global pack -year-to-date, EWY is a massive 9.9% ahead of VT on a total return basis.

Investors have so far viewed the situation as a buying opportunity. The 157 globally-listed ETFs with South Korean exposure have experienced over $430m of inflows so far in August. These inflows build on those experienced over the last three months, setting the asset class on track to register its largest inflow streak since the second half of 2014. 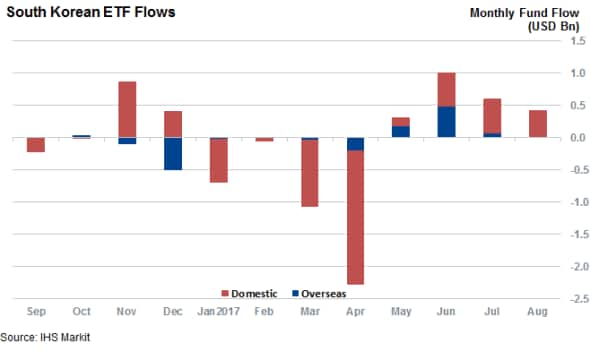 Both foreign and domestic investors have contributed to these inflows, and while funds listed in South Korea gathered $430m of new assets, foreign-listed ETFs with South Korean exposure saw a much more modest $450,000 of net inflows.

That $450,000 is negligible compared to the $486m that these foreign funds attracted in June.

Short sellers have also been relatively unmoved by recent developments. The number of KOSPI 50 shares out on loan has fallen by 8% over the last four weeks.

Only three of the index's constituents have more than 3% of their shares out on loan, which is the general threshold for a genuine short play.

Ironically, the stock with the largest increase in short interest over the last week is defense contractor Korea Aerospace Industries Ltd. The company is actually well placed to benefit from South Korea's commitment to shore up its military spending over the next few years.

South Korea's recent pledge to raise its defense budget to 2.9% of GDP has brought little comfort to Korea Aerospace Industries' shareholders. And who could forget the accounting scandal which nearly halved the value of its stock year-to-date.

The scandal may have climaxed last week when the company's CEO stepped down. However, short sellers are betting that more pain is on deck, and they have increased their positions to the highest level in more than three years.

Join us and KPMG at 10am EDT on October 6th for a webinar when we will discuss the recent IRS Forms W-8 changes and… https://t.co/T0kiEVC5ht

It's crunch time for cryptocurrency brokers & owners. How will the US infrastructure bill change your tax rules and… https://t.co/KZhAVGyE3y

Caroline Löfgren from Hg speaks to our own Jocelyn Lewis about key considerations for creating a successful ESG str… https://t.co/dYtKif0vY3