Official data showed US manufacturing output missing expectations in May, adding to a flow of recent data that point to a renewed bout of industrial weakness.

PMI survey data not only accurately predicted the downturn in industrial growth, but also revealed the underlying factors behind the slowing, notably a waning of both capex and consumer spending. The numbers therefore suggest there are downside risks to the near-term outlook for the US economy.

Commerce Department data indicated that factory production fell 0.4% in May. The decline was the second in the past three months, and suggests that industry is once again starting to struggle after a strong start to the year.

It's not just output that is falling. Official staistics also showed a drop in both factory orders and the narrower gauge of durable goods orders in April, the latest month for which data are available. Meanwhile, manufacturing payrolls numbers slipped back into decline in May, dropping for the first time since last October.

By contrast, output, orders and employment had all been growing at encouragingly solid rates earlier in the year.

Production was just 0.3% higher in the three months to May compared to the prior three months period, which is the worst performance since November. This compares with a two-and-a-half year high of 0.8% in February.

This renewed soft patch had been indicated in advance by IHS Markit's PMI data. Historical comparisons show close relationships between the PMI survey data and official data on output, orders and employment, with the PMI numbers available well ahead of the comparable official statistics.

The headline manufacturing index from the PMI survey had climbed to a near-two-year high of 55.0 in January, but has since lost ground. At 52.5, the May index was the lowest since last September. The survey's output index has likewise steadily trended down from a peak in January to an eight-month low in May. 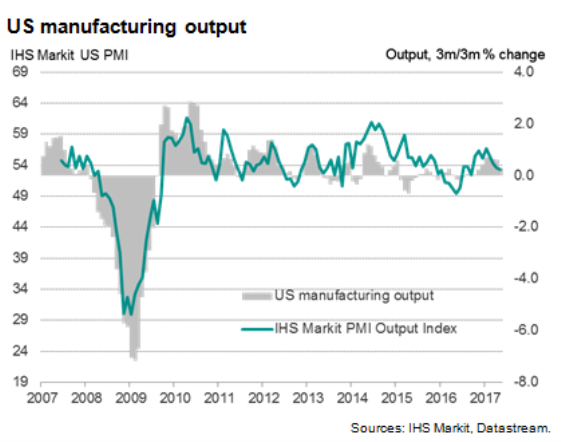 The survey's employment index has meanwhile slipped from a one-and-a-half year peak of 54.4 in December and recorded just 51.9 in May (a reading which regression analysis suggest is consistent with a 1,000 decline in the official payroll numbers, which was exactly in line with the latest official release). 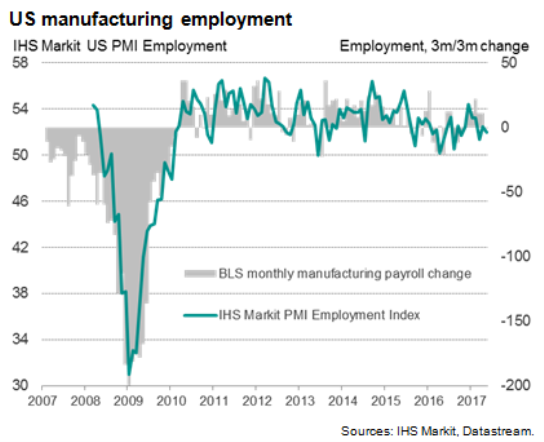 It's a similar story for the PMI survey's new orders index, which highlights the extent to which demand for US goods has waned. The index slumped to an eight-month low of 53.4 in May, down from a 28-month peak of 57.4 in January. 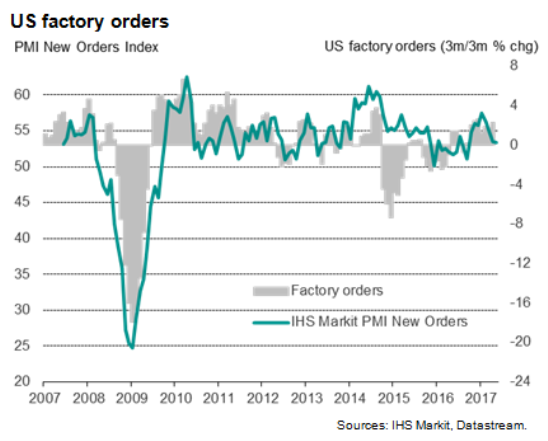 An analysis of the detailed sector data behind the PMI numbers provides further insight into the current state of demand. The data reveal that new orders for investment goods, such as plant and machinery, and consumer goods have risen at considerably reduced rates in recent months, with the latter slowing especially sharply.

While the slowing in growth of new orders for investment goods hints at a cooling of capital spending by businesses, the downturn in the new orders index for consumer goods signals a deteriorating trend in household spending. 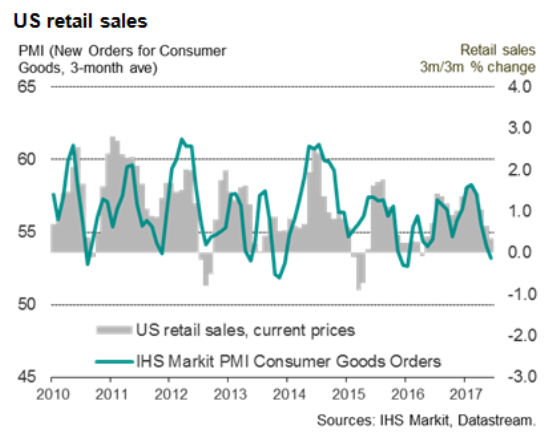 The above chart uses the PMI new orders index from US producers of consumer goods tracked against the 3m/3m per cent change in retail sales. Actual retail sales will include imported goods, so the correlation will naturally not be perfect. However, the chart highlights how it is very unusual for the PMI series to send a misleading advance signal as to turning points in sales growth. Note also that the PMI data are available two weeks prior to the official retail sales data.

What's especially useful about the PMI numbers is the low signal-to-noise ratios compared to other series that are often used by analysts (see box).

Whereas the survey indices had been trending higher late last year, in recent months they have been trending down. These latest disappointing May numbers are therefore unlikely to be spurious readings, but are instead a reflection of a renewed struggle of US manufacturers in the face of waning demand. 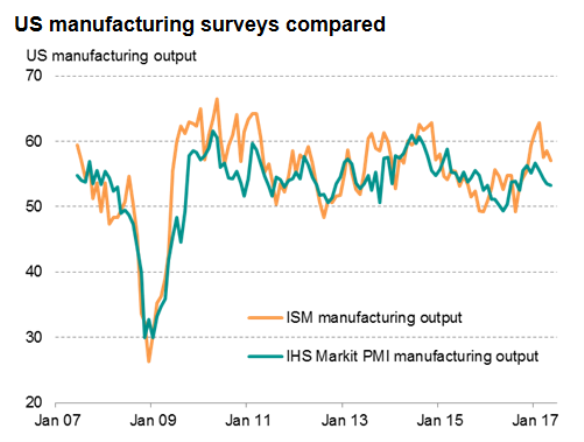 Read more about survey comparisons in the download below.