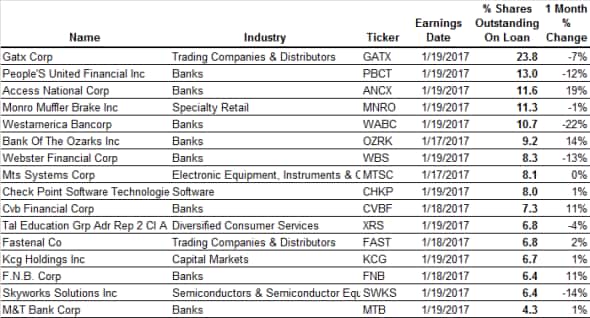 Railcar leasing firm Gatx is the most shorted company announcing results next week with 24% of its shares out on loan. Gatx has been a painful play for short sellers as the company managed to beat earnings estimates for five straight quarters despite falling revenues. The last earnings update has proved particularly painful for Gatx bears as its shares have surged by over 30%. Short sellers have stood stoic in the face of the recent rally however as demand to borrow Gatx shares has remained steady near the all-time highs set in the closing weeks of last year. 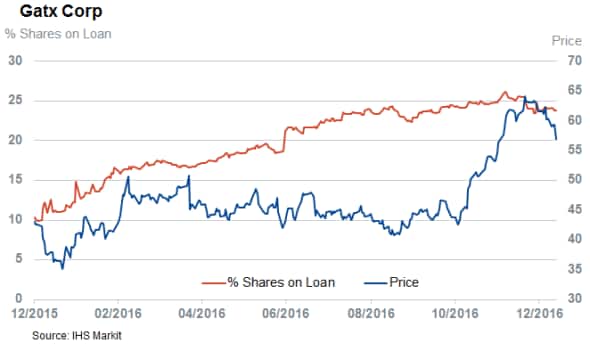 Short sellers have been much less willing to ride the pain in the second most shorted firm announcing earnings this week; savings and loan holding company People's United. Demand to borrow its shares had fallen by over 20% since early November when the post-election has swept many of the market's least favorite stocks to new recent highs. 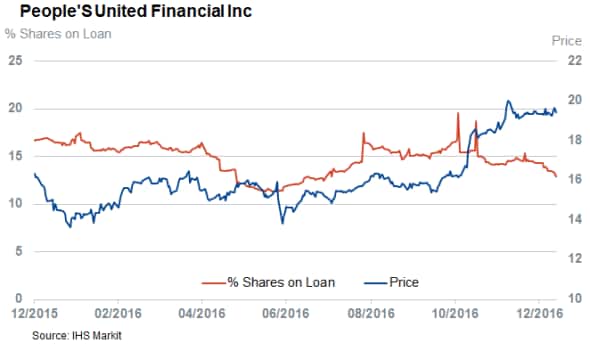 Banks, especially smaller regional institutions, have disproportionally felt this rally and we've witnessed large portions of short covering among many of the eight heavily shorted banks announcing earnings this week, all of whom are on the smaller end of the banking sector.

Another firm benefiting from the recent post-election rally is tool and building supplier Fastenal whose shares are up by over 20% since the first week of November. Unlike many stocks in the market however, the recent surge has nearly doubled in the last two and a half months. 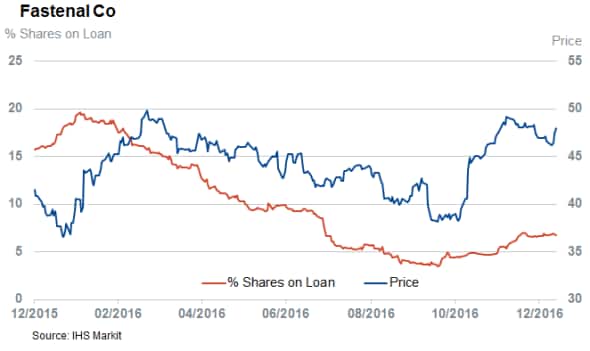 In Europe, the only firm with significant shorting activity is cybersecurity firm NCC which has just over 8% of its shares outstanding on loan. Short sellers have had a good track record in NCC of late as the borrowed 6% of its share in October of last year. This was just before the firm announced a spate of contract cancelations which knocked 40% off its share price. NCC's shares have been trading sideways ever since, but this lack of momentum hasn't deterred short seller positions as evidenced by the fact that the demand to borrow these shares has increased by a third since the firm's most recent setback. 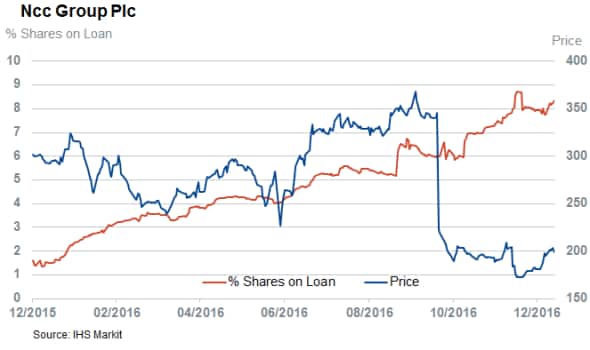 The only other firm to see any meaningful demand to borrow announcing earnings this week is Swedish bank Avanza Bank which has 3% of its shares on loan. However, short sellers have actively been covering their positions leading up to Avanza's earnings update next Thursday as demand to borrow its shares has fallen by 40% over the last three months.

Asian short sellers as also face another calm week ahead as only six firms announcing earnings this week have more than 3% of their shares out on loan, although only one of these short targets has a market cap greater than $1bn.

This firm is shipbuilder Hyundai Mipo Dockyard which sees the least demand to borrow of this week's lot as only 3.4% of its shares are out on loan. Unlike US stocks which have generally seen covering in the last few months, demand to borrow Hyundai Mipo shares has increased significantly in the last couple month to the highest level in over a year which could indicate growing negative sentiment towards the volume of global trade which shipyards like Mipo are reliant on for demand. 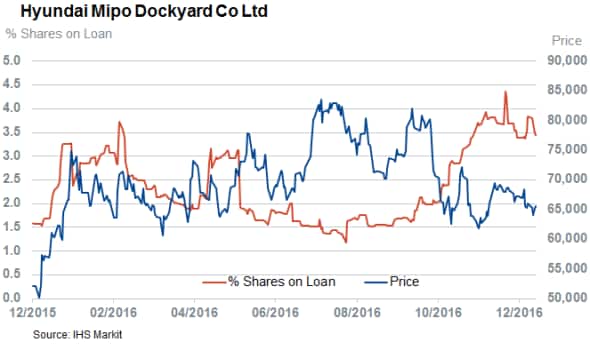 The domestic #economy proved to be more resilient than the Bank of Canada forecast. Global real #GDP is much strong… https://t.co/aFicHDPyZT

Find out how @NatWest_CI, IHS Markit and a large community of banks are helping customers streamline primary issuan… https://t.co/gBNXpxg1d6

As the adoption of data analytics grows, what must investors and fund managers do to ensure robust processes are in… https://t.co/dRockdtwAV