The German economy expanded 0.2% in the three months to September, according to results from official statistics body Destatis, indicating that growth has slowed markedly so far this year. In contrast, the economy grew 0.4% and 0.7% in the second and first quarters respectively. Moreover, the 0.2% growth rate was slightly below expectations of a 0.3% expansion and the weakest in a year. However, business surveys suggest growth is picking up again.

German economic growth and the PMI 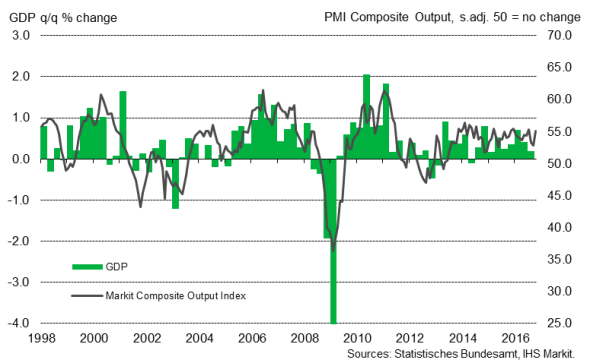 Although no details were revealed, Destatis reported that the domestic market remained the mainstay of the German economy, with final consumption expenditure of both households and government continuing to increase and boost gross domestic product, while negative impulses came from trade.

The weakness in the GDP report had already been hinted at by business survey data, with the German PMI dropping to a 16-month low in September.

That said, the outlook for the fourth quarter looks positive, with business survey data such as the PMI and Ifo pointing to an acceleration in economic growth.

Trade acts as drag on growth

Net trade and fixed capital formation in machinery and equipment acted as drags on economic growth in the third quarter, according to preliminary results from Destatis. Exports declined in the latest three-month period, while imports rose. Meanwhile, industry is likely to have had a mildly positive impact on economic growth. Industrial production expanded 0.2% in the three months to September, up substantially from a 0.8% decline in the second quarter.

The recent slump in the pound has made German goods and services less competitive in the UK (Germany’s second-largest single country trading partner) and it is therefore likely that the Brexit vote has had some negative impact on Germany’s trade balance in the third quarter. That said, the Manufacturing PMI New Export Orders Index reached its highest level since the beginning of 2014 in September and was little-changed in October, thereby suggesting that the weakness in the official data was only a temporary blip.

Interestingly, the latest Markit Business Outlook Report, which asks companies about their 12-month outlook for a number of variables and potential opportunities and threats to the outlook, revealed that companies grew more concerned about geopolitical and economic uncertainties, the US election and trade agreements such as CETA and TTIP. However, the report also pointed to a slight uptick in business confidence, adding to signs that the German economy will continue to grow at a steady pace.

The latest business survey results point to stronger economic growth at the start of the fourth quarter. The PMI recovered and reached its second-highest level this year so far in October, while Ifo’s Business Climate Index climbed to a two-and-a-half year high. Both IHS Markit and the German government expect GDP growth of 1.8% for 2016, which would be the strongest in five years.

Flash PMI data for November are released on November 23rd and will provide more important information on economic trends in Germany in the fourth quarter.